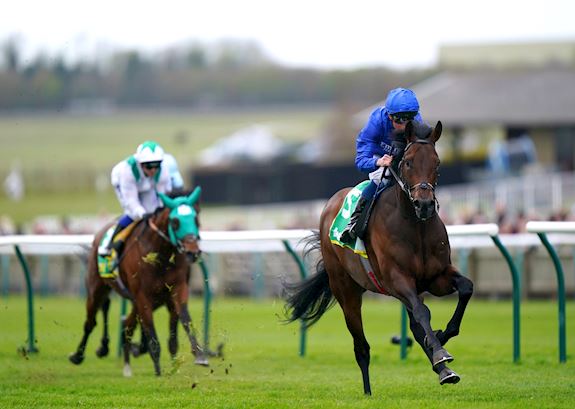 Trainer Charlie Appleby insisted he was both “delighted and relieved” after seeing Native Trail strengthen his position as favourite for the first Classic of the season, the QIPCO 2000 Guineas (Saturday 30th April) with a clear-cut success in today’s bet365 Craven Stakes.

Last sighted when ending his unbeaten two year old campaign with a second Group One success in the Darley Dewhurst Stakes, the powerfully-built son of Oasis Dream resumed where he left off with a victory that demonstrated he had clearly trained on.

Sent off the 1-4 favourite to make it a perfect five from five in the Group Three prize Native Trail, despite coming under pressure early, never really looked in doubt of surrendering his unbeaten record under William Buick.

Finding plenty when going into over drive Native Trail continued to forge on meeting the rising ground to defeat Claymore by three and a half lengths to give Appleby and Buick their third victory in the race since 2018.

Following the race Native Trail was cut to 6-4 by both Paddy Power and Coral to win the QIPCO 2000 Guineas and become the first horse since Haafhd in 2004 to take the Classic after success in the Craven Stakes.

Appleby said: “I’m delighted. Watching the race, I was happy throughout even when he came under the pump. I could hear everybody in the stands saying he is under pressure but we know this horse.

“What I love about him is that he does it all the right way round. He is not one of these horses that is a free traveller, that you think is doing too much and what is he going to find.

“You know once this horse hits the rising ground and gets into a battle he is going to keep finding. I’m delighted and relieved.

“I’m delighted we’ve got that first run under our belt. I was delighted with how the horse looked in the paddock and I’m delighted how he prepped into the race but I’m more encouraged now he has had that run into him.

“He has got a lovely run style. I know people say he might be a bit round and when he comes into the dip, he might come under the pump a bit. But when hits that rising ground, he races the right way around and in an economical fashion.

“He is not keen, and he doesn’t try to over-race. William can park him where he wants to and more importantly when he gives him the signal to pick up, he does. I’m very happy.

“We were two kilos heavier today than in the Dewhurst. I’m a big believer that to go into a Guineas you want to be the same weight as in the Dewhurst and I’m happy where we are. His racing brain has clicked in and we look forward to the Guineas now.

“He saw that out well there today. It was one thing after the Dewhurst that stepping up to the mile was always going to suit him and we saw that today and hopefully we will see that in the Guineas.”

Having put his other QIPCO 2000 Guineas entry, Coroebus, through his paces in a racecourse gallop this morning the Moulton Paddocks handler is excited to be heading into the opening Classic, which he is yet to win, with two live chances.

He said: “I’d rather go into any gun fight with two guns as they say. His Highness (Sheikh Mohammed) will be keen to run the two of them and he is very sporting as we have seen over the years. We are in a lucky position to have these horses.

“Yesterday morning I was sat with the jockeys and they posed the question who would we encourage William to ride. It would be Native Trail. There is no doubt about it.

“I was very pleased with Coroebus’ work this morning and he will come forward for that for sure. It will be a hard call but William can’t get off Native Trail as he will tighten up in the Guineas but I’m sure James (Doyle) is sitting there quite happy to jump on Coroebus.

“From a team point of view and Godolphin point of view if they turn up fit and well it is going to be an exciting race. I’m very proud to be part of it.
As we stand, I’ve not had a better chance of winning the 2000 Guineas but we have got to get it done first.”

A re-match between Native Trail and Claymore back on the Rowley Mile on April 30th appears unlikely with his trainer Jane Chapple-Hyam hinting that an outing in the French 2000 Guineas appears to be the more likely target.

She said: “We knew he was good and he has got a lot still to learn. Today was really his first race but he still looks gawky and green. I think I’d swing that way (French 2000 Guineas) as I’m not going to be able to turn this result around.

“I’d love to go to the French 2000 Guineas and it would be great to see Mary (Slack, owner) get there.

“Sometimes the second day at school is worse than the first as on the first day they can sometimes get away with it.

“He was quite difficult to saddle. It is just immaturity as he is a big raw baby. I like him a lot and I always have done.”