Five things to look forward to this weekend

SOMETHING (COLD) IN D’AIR AT SANDOWN

Wrap up warm and make your way to Sandown Park, where Unibet Champion Hurdle favourite Buveur D’Air is the star attraction on a cracking card, which finishes in time for you to find a pub to enjoy the mouth-watering Six Nations’ clash between England and holders Ireland.

Friday morning brought news that the Esher racecourse had been hit less hard by the snow and ice than had been forecast and Nicky Henderson will be as pleased as anyone that racing should hopefully now go ahead.

The 888Sport Contenders Hurdle is traditionally his trial of choice for Buveur D’Air and it has worked well so far, preceding both his previous wins at the Cheltenham Festival, presented by Magners, with wins here at 1-4 and 1-16.

This time is a little different though, and if Buveur D’Air is to join Istabraq and Co as a triple winner of the Unibet Champion Hurdle he has to bounce back from a shock defeat at Kempton Park over Christmas, when his stable-mate Verdana Blue swooped on the line.

That was disappointing, even allowing for a mistake three out and Verdana Blue being much improved. But this still ought to be a formality for Buveur D’Air, who on paper has stacks in hand.

Kim Bailey has described Vinndication as “bone idle”, but that hasn’t stopped the six-year-old rattling up six straight wins. Imagine how good he might be if he made a bit more effort!

Vinndication faces only four rivals in the Grade 1 888Sport Scilly Isles Novices’ Chase, but what the race lacks in numbers it makes up for in quality, so he might need to roll his sleeves up for once if he is to get the better of last month’s Cheltenham principals Lostintranslation and Defi Du Seuil. 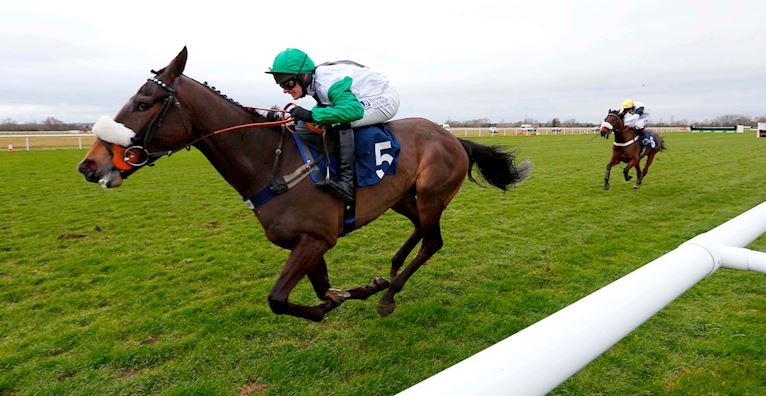 Ballymoy and Lord Napier are vying for favouritism, but few in the field can be ruled out. If you find the winner you will be quids in, as there will be no short prices. Best of luck.

IRISH (AND ENGLISH) EYES ON DUBLIN

While Buveur D’Air’s Sandown race is essentially a trial, Leopardstown’s BHP Insurance Champion Hurdle is a championship event in its own right.

One of four Grade 1 races on the first of two superb cards at the second Dublin Racing Festival, it pitches Champion Hurdle second Min and win machine Apple’s Jade against the two most recent winners of the event, Supasundae and Petit Mouchoir.

Huge prize money on offer at the festival has attracted a clutch of challengers from the UK hoping to gatecrash what was an Irish party last year, dominated by Willie Mullins and Jessica Harrington.

Day two of the Dublin Racing Festival is arguably even stronger, with four more Grade 1 races supported by three strong handicaps and another bumper.

The Unibet Irish Gold Cup, in which the betting is headed by Magners Gold Cup contenders Al Boum Photo and Road To Respect, is nominally the feature event, but the Flogas Novice Chase, in which Warren Greatrex’s Kempton Park Grade 1 winner La Bague Au Roi is vying for favouritism with Delta Work, looks just as fascinating.

Throw in the Tattersalls Ireland Spring Juvenile Hurdle, in which Joseph O’Brien bids to underline the strength of his Triumph Hurdle team with Royal Ascot third Sir Erec, and the Chanelle Pharma Novice Hurdle, won 12 months ago by Samcro, and it’s plainly quite a card.

GOSDEN TEMPTS DETTORI INTO THE COLD

All-weather racing has been our saviour this week and so it would be remiss not to mention Saturday’s fixtures at Kempton Park, Lingfield and Chelmsford - the last of them an additional fixture introduced on account of the bad weather.

We all know how much Frankie Dettori hates the cold, but John Gosden has tempted him out of hibernation to ride Wissahickon in the Betway Winter Derby Trial and Murray River in the 1m2f handicap at Lingfield.

We should probably take the hint.