Your eyes may have been drawn to the Knavesmire this week for York’s Ebor Festival and it was great to see recent Jockey Club Racecourse winners performing to the highest level.

Our Coral-Eclipse hero, Ghaiyyath, put up another dominant display in the Juddmonte International and it’s no wonder he’s now the highest-rated turf horse in the world.

We felt the Love once again as Aidan O’Brien’s star three-year-old filly made it a third Group 1 on the bounce with victory in the Darley Yorkshire Oaks. With three-year-old fillies having a great record in the Arc she must hold a serious chance for that target.

We turn our attention to Sandown Park this weekend for two eight race fixtures on Saturday and Sunday, with both cards sponsored by Betway.

Sunday offers two Group 3s – the Atalanta Stakes and the Solario Stakes – the latter of which has seen some top-class thoroughbreds feature in it down the years.

This is what you’ll need to know…

With the likes of subsequent Investec Derby winner Masar and multiple Group 1 performer Too Darn Hot having won this race in the last couple of years it’s understandably one we're excited about.

It would have been great to have welcomed Fev Rover back to Sandown Park on Sunday but she heads instead to France but we’re still left with an intriguing contest.

You had to be quite taken with Etonian’s triumph on debut over this same course and distance of seven furlongs a month ago, with the son of Olympic Glory doing his best work at the finish.

The Richard Hannon-trained colt was fairly unfancied at odds of 28/1 but rider Pat Dobbs was complimentary in his subsequent post-race interview. He could be anything, although the strength of that maiden has yet to be properly tested.

In four starts to date, Dubai Fountain has proved herself to be a useful filly and her second to Fev Rover here in the Star Stakes in July was very good. She backed it up next time filling the runner-up spot once more in the Sweet Solera at Newmarket and with the weight concession should go nicely.

This year’s QIPCO 2000 Guineas hero Kameko finished a nose behind Positive in this 12 months ago and Andrew Balding saddles the once-raced King Vega this time around. 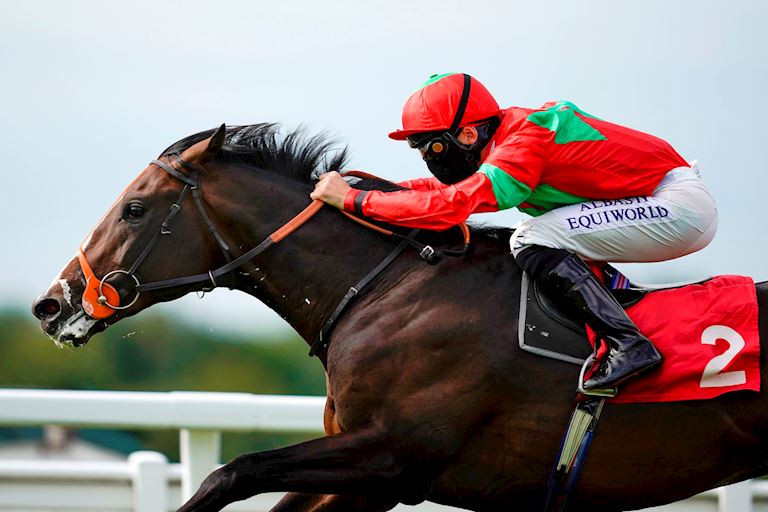 Champion jockey Oisin Murphy now takes the mount on the juvenile who was well-fancied on debut over this very course and distance at the start of this month and stayed on nicely in the closing stages just failing to get to Godolphin’s Yibir.

It’s encouraging that the Kingclere handler steps him up into this grade and he could well take a big step forward.

LAST YEAR'S HEROINE BACK FOR BATTLE IN THE ATALANTA STAKES

Lavender’s Blue had to negotiate a passage in the hands of Jim Crowley 12 months ago but did it well at the line to win this one mile prize.

We’ve seen the four-year-old twice this term including in the Nassau Stakes where she was only five lengths off Fancy Blue at the post which was encouraging. If she does she'll become the first dual winner of the Atalanta Stakes in a race which has thrown up some top-class fillies and mares in recent years.

We enjoy seeing Billesdon Brook strut her stuff on our courses and the dual Group 1-winner brings the best recent form into the race having finished a neck second to Nazeef in the Falmouth. She’s certainly the one to aim at.

The William Jarvis-trained Lady Bowthorpe produced an eye-catching performance in a Group 3 at Ascot last month coming from the back of the field to win in fine style. Looking something of a revelation perhaps she shouldn’t be underestimated here.

The three-year-old challenge is headed by QIPCO 1000 Guineas third Quadrilateral for the Roger Charlton team. She also acquitted herself well in the Coronation Stakes at Royal Ascot and brings pretty strong form into this.

A trip to France in mid-July reaped dividends for Charlie Fellowes and Hayley Turner when Onassis landed the Listed Prix de Bagatelle going away. A shock 33/1 scorer of the Sandringham Stakes at Royal Ascot, Onassis will have to step up considerably again but there’s every chance she could sneak a place.

BURROWS IMPROVER CAN TAKE ANOTHER STEP UP

The Class 2 Betway Handicap at 2.30pm on Sunday is very competitive as you would expect and should serve up plenty of interest.

Muraad, a consistent and improving four-year-old trained by Owen Burrows, got up to lead near the finish in a 14-runner handicap at Glorious Goodwood last time out and left a favourable impression. The change in tactics looked to prove beneficial, as he got his head back in front for the second time in his career.

With some fair course form already to his name too, he must feature on any shortlist.

Oxfordshire-based Eve Johnson Houghton has been in cracking form in recent weeks and she saddles Hyanna, who just failed to get up at Ascot last time. With apprentice and regular rider Georgia Dobie on board, her last visit to Sandown Park resulted in success.

The talented but quirky You’re Hired finished two places behind Muraad at his local track last time out having previously won by 14 lengths at Newmarket earlier in the season.

King Power Racing must be a tad disappointed with Good Birthday’s four runs back this season having finished a good third to Lord North in last year’s Cambridgeshire. Dropped a few pounds, if he could recapture his form towards the end of last season then he could be a player.

SPEEDY CHIEF LOOKING TO REPEAT THE TONIC FOR THE KUBLER PARTNERSHIP

Daniel and Claire Kubler now have both their names on the training licence and things have been going well.

They had a double on the card here at the start of the month, the first of the two coming over five furlongs courtesy of Seneca Chief.

The six-year-old won twice on the all-weather just after the resumption of racing but then was a beaten favourite at Kempton just a few days later. Although slowly away, he picked up well under Adam McNamara to win cosily here last time.

As usual, the five furlong sprint handicaps here are never easy to win and Seneca Chief will have some stiff competition.

Spoof enjoyed the softer conditions at Windsor last time out and is likely to have her ground once again. Remember, she was rated quite a bit higher in the past so may well have just found the winning groove again.

Others to note are Indian Raj who needs to bounce back but could do better, and Our Oystercatcher for Epsom handler Mark Pattinson. He was strongly supported into favouritism here last month and shouldn’t be dismissed lightly.

COULD IT BE A GOLDEN HAT-TRICK FOR THE FELLOWES CHARGE?

Having the will to win is sometimes half the battle with thoroughbreds and hat-trick seeker Golden Force looks to have that in abundance given the way he fought back at York last time out.

He’s gone up six pounds for that neck victory in what was a typically competitive race at the Yorkshire venue which will make life difficult but he’s an in-form horse.

Course winner Marronnier remains at the one mile trip and appeared to enjoy cut in the ground at Epsom in September last year and gets what might be ideal conditions here. His run at Newmarket last time was encouraging and for the Stuart Williams team he has every chance.

The cheekpieces are being applied for the first time on Enigmatic, which might seem rather ironic based on the name, but  it could be an interesting angle after he hung a bit last time when running to victory at Leicester. James Doyle is an noteworthy jockey booking for this one having never been on board before.

Trainer David Menuisier enjoyed a treble at this venue a couple of weeks ago and he saddles Dean Street Doll. The four-year-old has been running creditably as of late and could easily feature where it matters.

FIVE THINGS YOU NEED TO KNOW ABOUT THIS WEEKEND’S RACING