ITV has today announced it will continue as the exclusive free-to-air broadcaster of British horse racing until 2023.

ITV, which has shown racing exclusively since 2017, has secured the rights to show nearly 100 days of racing each year for a further three years from 2021. The deal includes all
the marquee events on ITV main channel, such as The Festival at Cheltenham presented by Magners, the Randox Health Grand National Meeting from Aintree, The Derby Festival from Epsom Downs, Royal Ascot and QIPCO British Champions Day from Ascot, Qatar Goodwood Festival, Welcome to Yorkshire Ebor Festival from York and the St Leger Festival from Doncaster.

The ITV Racing team, led by Ed Chamberlin, along with co-presenter Francesca Cumani, will bring to viewers comprehensive coverage across ITV’s main channel, ITV4 and the ITV Hub, which can be accessed on all mobile devices. 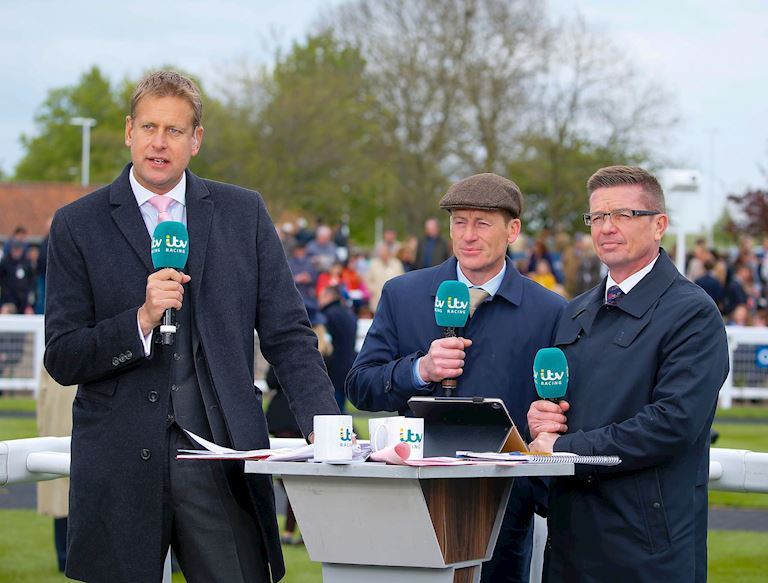 As part of the deal, the Opening Show, ITV Racing’s magazine preview programme, will continue each Saturday morning and on each day at the Cheltenham Festival, the Grand National meeting and Royal Ascot.

The announcement follows a successful return to racing in June following many weeks during which the sport was paused for the lockdown period.

During this time, Royal Ascot, despite the absence of the traditional pageantry, drew eight-year high figures each day, the peak viewing figure for the Investec Derby 2020 was over 2.2 million, the highest viewing figure for the race since 2012, and most recently Stradivarius and Frankie Dettori’s record-breaking fourth success in the Al Shaqab Goodwood Cup last week was watched by over a million people on the first day of ‘Glorious Goodwood’ 2020.

ITV Racing’s coverage has seen significant increases in television audiences during its tenure. So far in 2020, ratings for ITV’s coverage [main channel and ITV4 combined] are
22% higher than in 2019 and 45% higher than in 2016 [when Channel Four last held the rights].  So far this year, viewing for ITV4’s coverage is 2% higher than for the equivalent events shown on C4 in 2016. The biggest events in the calendar have seen large increases with the 2019 Grand National’s average audience up by more than 2m compared with 2016 and this year’s Cheltenham Festival hitting audience highs not seen since records began in 2003.

ITV’s racing coverage has also won acclaim.  The ITV Racing team won a BAFTA for its coverage of the 2017 Grand National and Director Paul McNamara earned a BAFTA nomination for last year’s Cheltenham coverage.  Ed and Francesca won the Broadcaster Sports Presenter of the Year award at the 2018 British Sports Journalism Awards.

“ITV is delighted to announce the continuation of free to air coverage of a sport that is loved and followed by so many.  To do so following a successful resumption of the sport with wide audiences returning to our coverage after such a long lay-off is particularly welcome and we look forward to bringing the very best this wonderful sport has to offer to viewers over the next few years.”

“ITV has been a terrific partner for British horseracing over the last three years and ITV has earned the right to renew the contract for a further three years. Its award-winning
productions are reflected with increased audiences, in contrast to wider TV audience trends, and they have succeeded in attracting a new, younger audience, without alienating in any way the existing fanbase. We look forward to working closely with the broadcaster in ensuring racing remains in this fantastic shop window provided by ITV and all its platforms. I’d also like to thank all the sport’s participants, particularly the jockeys, for the positive roles they have played in engaging with the ITV coverage.”

Delia Bushell, Group Chief Executive of The Jockey Club, which stages events including the Randox Health Grand National Festival at Aintree, The Festival at Cheltenham presented by Magners, The Derby Festival at Epsom Downs and the QIPCO Guineas Festival at Newmarket’s Rowley Mile, said:

“I’m delighted this new agreement has been reached between British Racing’s rightsholders and ITV. We look forward to continuing to work with the ITV Racing team to develop the opportunities this excellent free-to-air broadcasting provides us, as we seek to grow in popularity and diversity as a sport in the years ahead.”

“The extension of our highly successful terrestrial partnership with ITV is great news for Ascot. It is a pleasure to be a part of this award-winning partnership with ITV which has
seen continued growth of audiences across all our race meetings. We look forward to the next three years’ working together to bring Ascot’s racing to existing and new audiences across the ITV portfolio of platforms.”

"The whole team at ITV Racing have done a tremendous job of showcasing our sport on terrestrial television since 2017.

“Bringing our biggest meetings and stars to the widest possible audience is of huge importance to the whole industry and we believe that the ITV team are perfectly placed to deliver for the benefit of everyone across racing.”