This Saturday sees one of the most eagerly awaited races at Newmarket of the whole season.

One of the highlights of Flat HQ’s ‘Gold Season’ and run over a mile, The Kingdom of Bahrain Sun Chariot Stakes boasts a quality field of fillies and mares of all ages.

And that’s not all we have on offer this weekend. There’s some top class racing across the card on the Rowley Mile on Saturday and, of course, we’ll be saying an emotional farewell (albeit from our sofas and armchairs) to Enable on Sunday when she bids for glory in Paris.

Here we take a look at five things you need to know about this weekend’s racing.

Few horses get to this stage of the season with an unbeaten record, especially when they’ve been lining up in Group races.

But that’s exactly the position the brilliant filly Champers Elysees finds herself in in 2020 as she prepares for Saturday’s feature race at Newmarket, the Kingdom of Bahrain Sun Chariot Stakes at 2.45pm.

She was only ‘supplemented’ for the race a few days ago, which means trainer Johnny Murtagh must fancy their chances. Supplementing a horse means paying extra (£20,000 in this case) to enter your horse nearer the day of the race, rather than when entries opened for the first time (at which point the price was £2,500). Think of it as like missing the ‘early bird’ price for a concert ticket because you weren’t sure if you could make it, but at much greater cost.

Anyway, as well as having won on all four outings this season, including the Group 1 Matron Stakes at Leopardstown three weeks ago, Champers Elysees has the kind of back story that only sport seems able to provide.

Last October she went to the Horses In Training Sales but owners Fitzwilliam Racing failed to find a buyer to meet the €95,000 price tag. Fast forward 12 months and the horse no one wanted to buy has won €220,660 in prize-money and now been sold privately to the Japanese owner Teruya Yoshida at what we can only assume is significantly more than that €95,000.

She has victories on good to firm, yielding and soft to heavy ground in Ireland this term, so you don’t need to worry about any more forecast rain ruining her chances.

And the fact that her owners are happy to pay that whopping supplement to enter her at this late stage demonstrates she’s not travelling over for her first run in the UK just for ‘the experience’.

O’BRIEN HOPES FOR A PEACEFUL SATURDAY AT NEWMARKET

It wouldn’t be a Group 1 contest on the Rowley Mile without some stiff competition and, while Champers Elysees has peaked all our interests, there are 11 other contenders.

Aidan O’Brien’s three-year-old filly Peaceful has appeared once on this track before, when second in November last year with the trainer’s son Donnacha on board. Since then she’s finished first, third and, most recently, second at Leopardstown 21 days ago.

Under normal circumstances Frankie Dettori would ride John Gosden’s Godolphin-owned Terebellum here, but with his ‘Queen’ (Enable) preparing for the race of her life in Paris just 24 hours later the flying Italian is taking no chances. 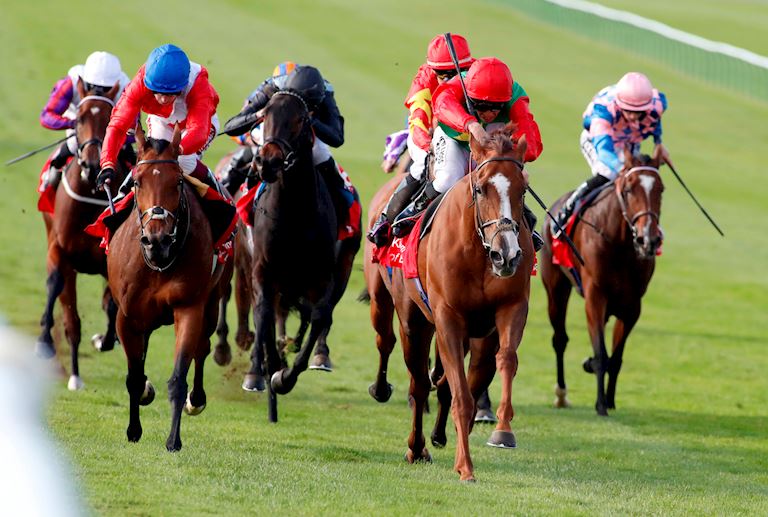 Instead James Doyle will pilot the four-year-old, who won the Betfair Dahlia Fillies’ Stakes on this track in June and then finished second in the Queen Anne Stakes at Royal Ascot to Circus Maximus. A month later she was third to Nazeef in the Tattersalls Falmouth Stakes on Newmarket’s July Course.

Nazeef herself has a huge chance here over her preferred distance of 1 mile – her last five victories have been over the same trip – and for that reason we can all draw a line through her run in France last time out when she was ninth of 11 runners over two furlongs further.

A final word, then, for Billesdon Brook, the five-year-old filly who gave trainer Richard Hannon and jockey Sean Levey a day to remember in May 2018 when defying odds of 66-1 to take the QIPCO 1000 Guineas crown.

She hasn’t managed to find her way into the winners’ enclosure this season but each way backers will be delighted with four second places from five starts. And having won this race last year you’d be brave to write her off.

GURKHA WILL HAVE TO FIGHT OFF THE CAVALRY CHARGE

If you thought last Saturday’s bet365 Cambridgeshire was a cavalry charge then wait until you see what we have in store for you at 1.40pm.

Thirty runners are set to go to post for the 150,000 Tattersalls October Auction Stakes, a sprint handicap for two-year-olds over six furlongs.

You’d be forgiven for assuming the market would be wide open for a contest with this many contenders but you’d be wrong.

Bookmakers currently have the favourite and top weight Mighty Gurkha as short as 6-4, after winning a Class 1 race on the all-weather at Kempton Park exactly four weeks ago for his trainer Archie Watson.

There’s no doubt this drop in class and the fact the in-form Hollie Doyle is on his back will strengthen that appeal, but horses – especially juveniles - shorter than 2-1 can be hard to back in 30-runner fields.

Another in-form jockey, William Buick, will be aboard one of the leading dangers, the gelding Perotto for trainer Marcus Tregoning and a general 8-1 shot. Wins at Sandown Park and Goodwood were in far smaller fields than this (four and three respectively) but everything we’ve seen so far suggests that this distance is his favourite.

Mighty Gurkha isn’t the only horse Watson will saddle in this and there’s lots to like about his filly Ocean Star. Another yet to start at the Rowley Mile, she followed up a fifth at Yarmouth on debut with back to back seconds at Chepstow and Hamilton before winning by a huge distance of 11 lengths back at Chepstow in August.

That was a Class 5 contest, so on paper at least this will be much tougher. But as the old saying goes, you can only beat what’s in front of you and who knows if she can step up to the plate here?

Of the rest, Hot Scoop notably produced a hat-trick this summer with two wins at Bath and another at Windsor over five furlongs before finishing last of seven over this trip last time out.

And don’t discount Gift List, another improving filly this time trained by Karl Burke. A second on debut at Ripon over this trip was followed by victories at Newcastle and Redcar over seven furlongs, the latter on the kind of soft ground we might well see on Saturday.

URBAN ARTIST READY TO BRUSH ASIDE HER RIVALS

When you get to Arc weekend (more on that in a moment) it’s only natural to allow your mind to wander to the forthcoming jumps season.

And while there’s still some unfinished business to see to before the most unusual Flat season in living memory is brought to a close, connections one of Saturday’s runners would rather forget their brief foray into racing over obstacles.

Urban Artist was an impressive winner in the Bumper which concluded the Saturday of Cheltenham’s November Meeting last year. But, sent out for a first spin over hurdles in her next race at Wincanton on Boxing Day, she unseated her rider and hasn’t been seen on a Jump racing card since.

However, the five-year-old mare has won twice on the Flat this year, at Windsor and Goodwood, and is a 7-4 favourite to make it three on the bounce here in the British EBF Premier Fillies Handicap at 3.20pm for trainer Hughie Morrison and (champion) jockey Oisin Murphy.

Of her rivals, Andrew Balding’s Inclyne has run three times at the Rowley Mile, including when winning here in June this year. But it will be considerably softer than the good to firm she’s experienced at the track on each previous occasion and that might be a concern.

Ice Sprite is another for further consideration, given she has a win on soft (heavy in places) and on Newmarket’s July Course, albeit the latter was on good to firm ground.

ENABLE AND FRANKIE SHARE ONE LAST TANGO IN PARIS

We’ve run out of superlatives for the magnificent mare Enable and, frankly, if you’ve made it this far down this column then you probably know for yourself just how good she is.

Here at The Jockey Club we’ve been lucky enough to witness her winning a first Group 1 - the Oaks at Epsom Downs - and go on to victories at Kempton Park and Sandown Park as part of what is, by anyone’s standards, a glittering career. 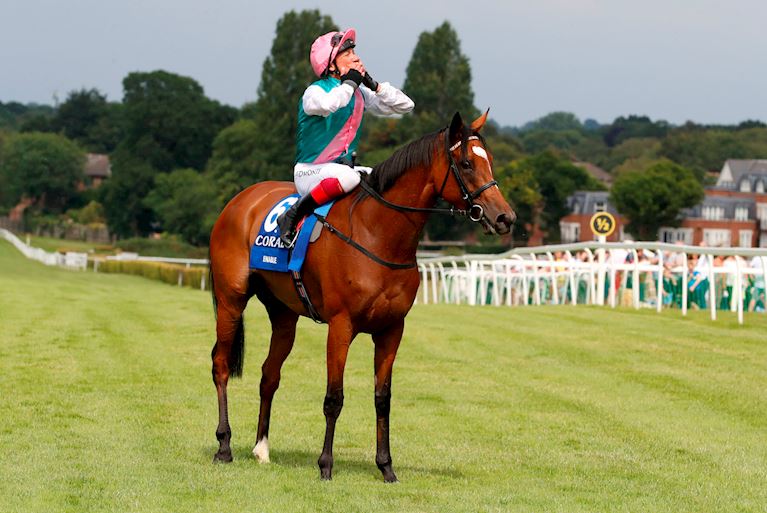 On Sunday at Longchamp she’ll bid to become the first horse in history to win the Prix de l’Arc de Triomphe three times. She’ll face a hugely competitive field of outstanding Group 1 winners including this year’s Derby hero Serpentine and to regain her crown after the disappointment of being pipped in this race last year would be a sensational achievement.

Win, lose or draw we already know this is her swansong and that we’ll never see her on a UK racecourse again.

So let’s sit back at 3.05pm, watch her go to post one final time and cheer home the greatest mare of this (or perhaps any other) generation. Adieu!