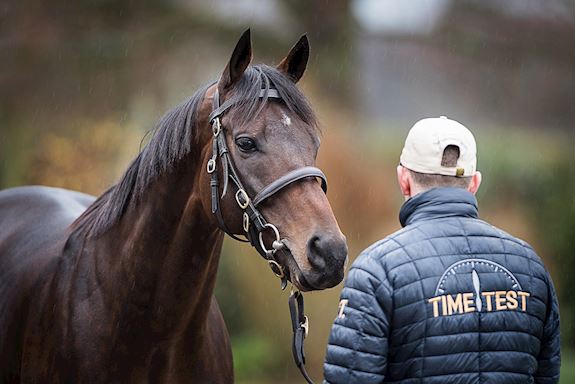 The National Stud is delighted to announce that Time Test, who was purchased by The Jockey Club at the end of his racing career from Prince Khalid Abdullah's Juddmonte Farms, is set to take up stud duties at Sam Williams' Little Avondale Stud in New Zealand following their purchase of his Southern Hemisphere rights.

National Stud Chairman, Guy Roxburghe, said: “We are hugely excited to be teaming up with New Zealand’s longest established stallion stud to offer Time Test to breeders there. His first season at Stud here in England has been a great success and we really couldn’t have wished for a stronger list of Breeding Right supporters, all of whom have sent him some really wonderful mares”.

By record breaking sire Dubawi and out of Gr.1 winning two-year-old Passage Of Time, Time Test was himself a winner at two who went on to impressively win the Gr.3 Tercentenary Stakes in track record breaking time that still stands.

Also a winner twice at Gr.2 level and multiple Gr.1 placed, his trainer Roger Charlton summed up his career perfectly in saying “Time Test blew away the opposition at Royal Ascot as a three-year-old when he looked like a real Group 1 horse. Speed and acceleration were his main assets.”

Little Avondale principal Sam Williams “We are extremely proud and excited to be standing Time Test here at Little Avondale. It has been over four decades since we stood the English bred Oncidium, who won the Coronation Cup Gr.1 and went on to become New Zealand’s Champion Sire.

Time Test has a wonderful pedigree by a champion sire and from a very strong female line. He is an impressive, athletic individual with a very kind eye, however, it was his performance on the track that really caught my attention. He had a unique toughness and a super turn of foot. It is these credentials that Time Test brings with him that will appeal to New Zealand Breeders.”