Jockey Club Racecourses (JCR) today announced plans to maintain the contribution it makes to British Racing’s prize money from its own resources in 2019 at the expense of other areas of investment, while it braces for a multi-million pound reduction in revenues from licensed betting office (LBO) media rights following the Government’s Gambling Review.

JCR has budgeted to contribute £27.1 million to prize money in 2019 across 347 programmed fixtures, mirroring its planned 2018 contribution (across 348 scheduled fixtures), which itself was a record £4.2 million increase on 2017. This includes seeing JCR continue to ‘unlock’ the industry’s Appearance Money Scheme (AMS) across all races this applies at its 15 racecourses, for as long as this remains an industry-agreed funding model. AMS sees prize money extended to more runners on top of racecourse investment. JCR’s plans would also maintain grassroots race values that were increased by 33% the previous year.

“Every independent estimate has us facing a significant hit to our revenues from reduced media rights income as betting shops close across Britain on the back of the Gambling Review. We’ve had some tough decisions to make and we’ve chosen to prioritise our contribution to prize money because we know how important it is to racing’s participants.

“We will maintain this record contribution from our resources for as long as we can, which comes at a cost to other areas of investment, such as improving our facilities. We already reinvest every penny we make so a reduction in revenues means less to go back into the sport.

“I hope people will understand we need to keep this decision under review in case LBO media rights revenues are hit harder and faster than the independent estimates, and we publish all our figures to be transparent on that. It’s also not just a case of when legislative changes kick in; it’s also about when betting shop leases come up. What we can guarantee is that we will continue to do everything in our power to support our industry and only ask in return that participants support Jockey Club Racecourses.”

“Horsemen will be relieved to know that Jockey Club Racecourses are maintaining their prize money levels in 2019, and recognise that as media rights income falls this represents a further investment by the Club in the sport. Ensuring that all races are unlocked and preserving the 33% increase in grass roots values are particularly important for the vast majority of the horse population, on which the fixture list is dependent.”

JCR reinvests all its profits back into British Racing as the racecourse arm of The Jockey Club, which is governed by Royal Charter to act in the best long-term interests of the sport. Over the last ten years it has increased its prize money contribution each year on the back of sustained commercial growth and, with these plans announced today, JCR will have contributed £201 million in the decade 2010 to 2019.

“In an era of significant financial uncertainty, I am sure that Jockey Club Racecourses’ intention to maintain its investment in prize money in 2019 will be welcomed by Horsemen. It is a challenging time for racecourses of all sizes with a wide range of business models and the RCA will continue to support all of its members as they deal with the rapidly changing media rights landscape.” 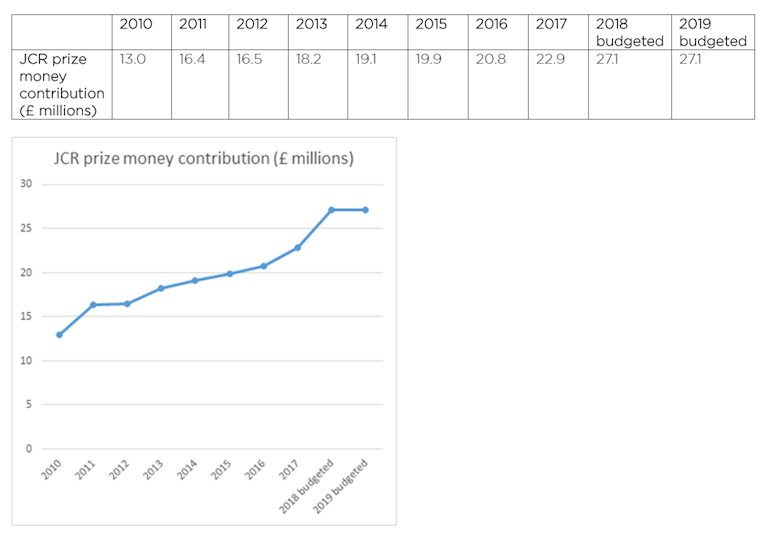