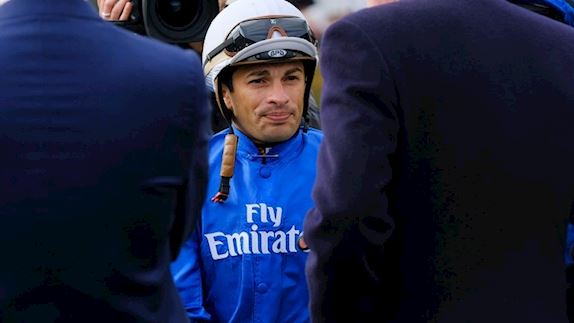 Following yesterday’s scratching stage, Vis A Vis is one of 57 horses remaining engaged in this two and a quarter mile heritage handicap. The second leg of The Autumn Double, it is being sponsored by Dubai for the first time this year and has had its prize money doubled, making it the joint most valuable flat handicap in Europe.

Well on course to land his third British Jockeys Championship this season, de Sousa has an outstanding Cesarewitch record, having won it in 2017 aboard Withhold, 2016 on Sweet Selection and 2013 on Scatter Dice.

Unbeaten in two Flat starts since being sold for £31,500 eleven months ago and moving from France to Somerset to join the predominately jumps-orientated yard of trainer Neil Mulholland, Vis A Vis has not run since beating fellow Dubai £500,000 Cesarewitch candidate, Just in Time, by almost three lengths at Kempton Park on 8th August.

While Just In Time has won twice since then, most recently picking up a 4lb weight penalty for this race when landing the Mallard Handicap at Doncaster, Mulholland has chosen to keep Vis A Vis away from the racecourse, protecting his handicap mark.

Willie Mullins, Ireland’s Champion Jumps Trainer, dominates the list of entries with no less than seven representatives, led by the Cheltenham Festival-winning hurdler, Limini, successful in the valuable Petingo Handicap at Leopardstown last month, and Stratum, who suffered serious traffic problems when hot favourite for the Ebor Handicap at York.

Another top contender from a 12-strong Irish entry is Aidan O’Brien’s Cypress Creek, winner of the Group 3 Loughbrown Stakes at Naas on Sunday.

Ian Williams is the British handler with the most entries – four – including Stars Over The Sea, runaway winner of the Rewards4Racing Cesarewitch Trial Handicap over the full course and distance ten days ago, while John Gosden, successful in the bet365 Cambridgeshire on Saturday thanks to Wissahickon, could complete The Autumn Double with either Precious Ramotswe or Almoghared.

“The Dubai £500,000 Cesarewitch has been the plan with Vis A Vis ever since he won at Kempton, we wanted to make sure we kept his weight low. Initially we weren’t too sure if he would squeeze in near the bottom of the weights so it’s good that he’s now assured of a place in the field.”

“Everything is fine with him and he looks well. He did a nice piece of work the other day and I am very happy with him – as far as I know, Silvestre de Sousa will ride him in the Cesarewitch.”

“It’s a great race with great prize money which produces a fantastic spectacle and it’s just nice to have a horse eligible who looks like he has a real chance. My only previous runner in it was Mr Burbidge [who beat just two home behind Big Easy four years ago].”

“Vis A Vis is a very laid-back horse with a good temperament so he should cope with the big field. He’s also won on all types of ground, although we’d like to see some moisture in the surface come the big day.”

“I’d be telling lies if I said that we were aiming at the Cesarewitch when we bought him but we did see him as a dual purpose horse rather than just a hurdler.”

The addition of the Dubai £500,000 Cesarewitch to the Dubai sponsorship portfolio is part of a new deal that secures the partnership between Newmarket Racecourses and Dubai for a further five years until 2022.

The Cesarewitch is one of the highlights of the Dubai Future Champions Festival, which takes place on the Rowley Mile racecourse on Friday 12th and Saturday 13th October 2018, and also features the Group 1 championship two-year-old race, the Darley Dewhurst Stakes.

It is Newmarket’s aim that the Cesarewitch is eventually worth £1 million and that it becomes one of the most anticipated and competitive races in the racing calendar. These ambitions for the race are supported by the BHA Race Planning Committee, and step one towards achieving this target is the Dubai £500,000 Cesarewitch in 2018.