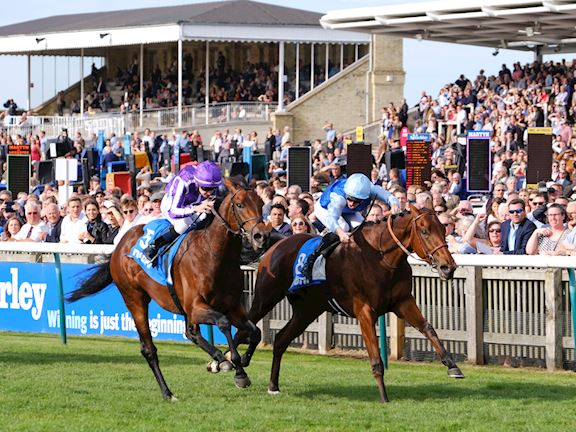 Newmarket Racecourses today announced its prize-money plans for 2019, with £10.8 million on offer across its 39 meetings, along with boosts to the value of three Pattern races and a £350,000 Cesarewitch.

Following the news that the European Pattern Committee has upgraded from Listed to Group 3 status two ten furlong races at Dubai Future Champions Festival, the prize-money for both the Zetland Stakes and the Pride Stakes will increase by £20,000 in 2019.

Newmarket Racecourses is also increasing the value of the Group 3 Bahrain Trophy, run on the opening day of the Moet & Chandon July Festival, from £150,000 to £175,000 in a move that represents a further positive for the programme for nurturing high class staying horses.

In another boost for prize-money, thanks to additional support from bet365, the second day of the Moët & Chandon July Festival will this year open with the bet365 Trophy, a 1m6f open handicap worth £120,000. The race replaces a 0-105 rated handicap worth £50,000.

Full details of the race conditions and value of Newmarket’s 55 Pattern and Listed races and four Heritage Handicaps are included in the Newmarket Racecourses Pattern & Listed Programme Book, published this week.

“We are delighted that the Pride and the Zetland have earned their upgrade to Group 3 status. We know it took time to get the balance right, but Newmarket’s autumn programme is now settled and thriving. These upgrades are an endorsement for the make-up of the autumn fixture list and the quality of horses the programme is attracting.

“Staging the highest quality racing at our showcase fixtures is what Newmarket is all about. The Dubai Future Champions Festival stages nine pattern races over two days of racing in 2019, a feat few other fixtures or festivals can match and it is something we are proud of.

“In addition to the £40,000 increase that will support the upgrades at Dubai Future Champions Festival, the value of the Bahrain Trophy in July is rising by £25,000. The Bahrain Trophy is a valuable stepping stone for potentially top class stayers and we are pleased to support the industry’s drive to develop an attractive programme for quality staying horses in Britain.

“We are also delighted to continue our relationship with bet365 by introducing the bet365 Trophy for 2019.”

Total prize-money of £10.8m across Newmarket’s 2019 race programme includes Jockey Club Racecourses maintaining the contribution it makes to prize-money from its own resources.

The investments unveiled today, allied to uncertainty regarding future income levels from the sale of media rights to betting shops, in light of the impending law change regarding FOBTs (Fixed Odds Betting Terminals), have, however, influenced the course’s plans for the Cesarewitch.

“Last year we embarked on the ambitious plan to make the Cesarewitch worth £1m, but unfortunately circumstances have changed since we made the announcement in April 2018 and with both the short and longer-term outlook being uncertain, it was deemed neither sensible nor sustainable to stick blindly to the proposed year-on-year increases.

The race conditions for the Cesarewitch, run as part of Dubai Future Champions Festival, will revert back to what they were prior to 2018. Consequently, there will be no cap on the handicap rating of entries nor a stipulation that horses must have run twice on the Flat over 12 furlongs or more between April and September to be eligible.

“We have discussed all of these developments with our sponsors and notified owners and trainers. In the current climate, it is all about trying to get the balance right and spreading our investment as effectively as possible.”