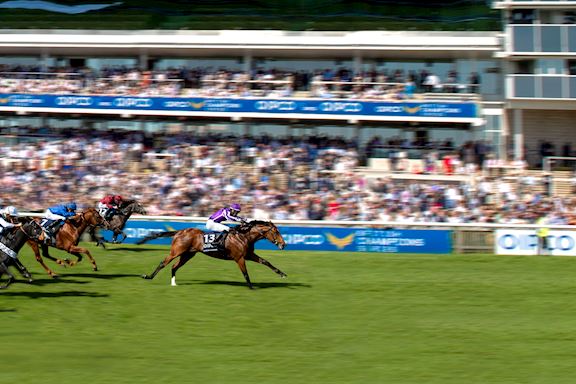 Andre Fabre, the legendary 29-time French Champion Trainer, this morning stepped up preparations for his QIPCO 2000 Guineas candidate, Persian King, when overseeing his first turf canter of the year, less than two months before the big race takes place at Newmarket’s Rowley Mile Racecourse on Saturday, 4th May.

Persian King was today revealed as part of a top class and highly international entry of 75 colts, including 20 from Ireland and one from Dubai (the Meydan Classic runner-up, Golden Jaguar), for this £500,000 event which heralds the start of the 2019 QIPCO British Champions Series.

A son of Kingman, himself a QIPCO 2000 Guineas runner-up and British Champions Series veteran, Persian King won three times in a four-race juvenile campaign which culminated in victory in the Group 3 Masar Godolphin Autumn Stakes over the full QIPCO 2000 Guineas course and distance on 13th October.

Fabre has won the first British Classic twice before, with Zafonic in 1993 and Pennekamp two years later, and has gone close to a third success twice in the last four years, with Al Wukair (second in 2017) and Territories (third in 2015). He also struck on behalf of Persian King’s part-owners, Ballymore Thoroughbred Ltd, in the QIPCO 1000 Guineas with Miss France in 2014.

All the top two-year-old colts of 2018 are among the entry including the outstanding unbeaten Champion Two-Year-Old, Too Darn Hot, brilliant winner of another Rowley Mile October 13th contest, the Group 1 Darley Dewhurst Stakes, and his John Gosden-trained stablemate, Calyx, not seen since running away with the Group 2 Coventry Stakes at Royal Ascot last June.

Irish training maestro Aidan O’Brien has already landed this showpiece event on a record nine occasions and he has numerous strong contenders among his 16 representatives, headed by Ten Sovereigns, successful in the Group 1 Juddmonte Middle Park Stakes on the Rowley Mile last autumn, and Magna Grecia, who chased home Persian King in the Masar Godolphin Autumn Stakes before landing the Group 1 Futurity Trophy at Doncaster.

Two other interesting contenders are the Hamdan Al Maktoum-owned pair, Jash and Madhmoon. Trained by Simon Crisford, Jash excelled himself on just his third career start to finish only half a length adrift of Ten Sovereigns in the Juddmonte Middle Park while Madhmoon, from Kevin Prendergast’s Irish yard, is unbeaten in two lifetime outings including the Group 2 Champions Juvenile Stakes at Leopardstown.

“Persian King has done well and has had a quiet winter. He had his first canter on the grass this morning and there is no rush with him.”

“I am a great fan of Newmarket Racecourse and it helps that Persian King got some experience of the Rowley Mile when he won the Autumn Stakes there. It was a strong piece of form and he won despite still being green.”

“But getting practice for the QIPCO 2000 Guineas was not the sole purpose for running him in the Autumn Stakes – it was a good race for him on nice ground – and there is still a chance we could decide to run him in the Poule d’Essai des Poulains [French Guineas] instead.”

“I would very much like for him to have a prep race before his Classic and that could be in the Prix Djebel (at Maisons-Laffitte on 10th April) but good ground is important for him so if we were to get heavy rain he may have to skip the trials. He won’t be coming to England for his prep race as the timing of the British trials is too close to the Classics.”

“He is a big strong horse with an easy character who is very laid back in the mornings but has a totally different attitude when the gates open.”

“Although he is from the family of mile and a quarter horses including the Prix Ganay winner, Planteur, the influence of his sire, Kingman, is very important and Persian King has shown me the ability to accelerate off a high cruising speed.”

“The QIPCO 2000 Guineas is a race that makes stallions, you need to be good to win it, and it seems that there was a strong generation of two-year-olds last season.”