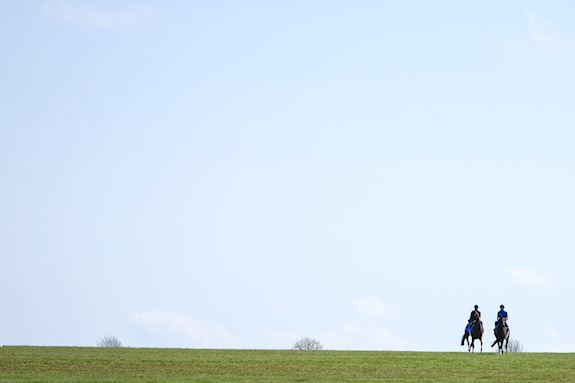 Trained at Middleham by Mark Johnston, Elarqam was strongly fancied for the QIPCO 2000 Guineas almost 12 months ago and ran a fine race to be fourth, just over two lengths behind the winner, Saxon Warrior.

But the son of Frankel did not progress as expected afterwards. He first finished in midfield when favourite for the Irish 2000 Guineas, then was caught close home by Thundering Blue when stepping up to a mile and a quarter in a York Group 2, before a pelvic injury was discovered following a disappointing display in a Group 3 at Salisbury in August.

The Sir Michael Stoute-trained Mustashry, by contrast, won three of his five races last season, including the Group 2 Park Stakes at Doncaster and the Group 2 Shadwell Joel Stakes on this course, over distances ranging from seven furlongs to a mile and a quarter.

He did not enjoy much luck-in-running and may not have appreciated the rain-softened Churchill Downs turf when eleventh on his most recent start, in the Breeders’ Cup Mile last November. He must carry a 5lb Group 2 penalty on Thursday, though a similar 3lb imposition failed to stop him in the Shadwell Joel.

The running order at this year’s bet365 Craven Meeting has been altered due to ITV Racing’s coverage on Good Friday. ITV 4 will carry four races from Tuesday and Wednesday and as a result, the bet365 Craven Stakes will take place on Wednesday, 17th April. Please visit www.newmarketracecourses.co.uk for full details of each day’s running order.

“I spoke to Mark Johnston on Monday and he is pleased with Elarqam’s condition and is very happy with his work.

“Everything went wrong for him last year from the Irish Guineas onwards, so we pulled up stumps, touched up his wind and gave him a long break and now we are happy with him. He had a hairline fracture of his pelvis and you can never be sure how these things have healed but his last pelvic scan, in December, was very good.

“Everything is a question mark for him, we just need to see him back as last year went downhill and we know he is better than that. Only time will tell his best trip – he is by a Guineas winner out of a Guineas winner so he could turn out to be a miler, though he could also want further.

“I saw Mustashry on Monday and he has started to come to himself and Sir Michael is happy with the way he is going.”

“He is a very solid performer who has been a great servant to us and hopefully he will go on again this year.

“I don’t think the penalty will be what beats him in the bet365 Earl Of Sefton but I’m not saying that either he or Elarqam are going to win it either. It’s a long year and it’s a good starting off point for them.”

“Jim Crowley had the choice of which one to ride and has plumped for Elarqam. Dane O’Neill will be aboard Mustashry.”