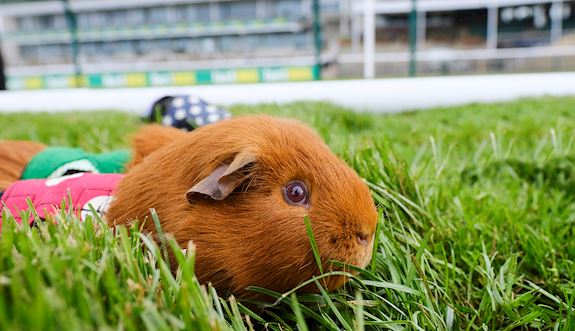 THE HOME OF HORSERACING SWAPS THE GUINEAS FOR GUINEA PIGS

THE HOME OF HORSERACING SWAPS THE GUINEAS FOR GUINEA PIGS 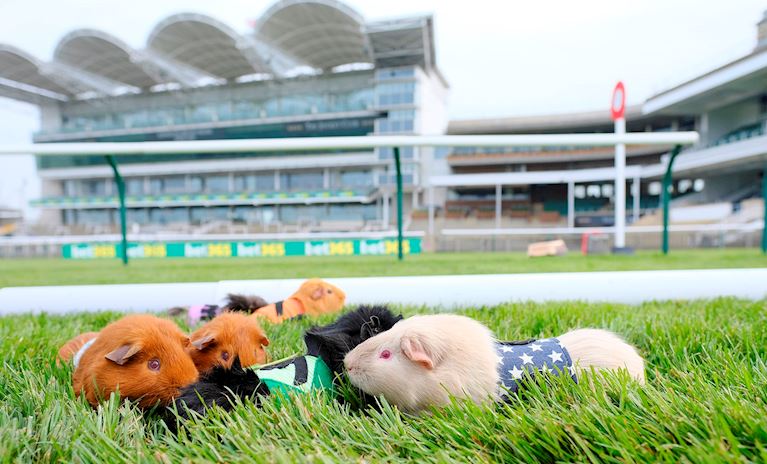 TUESDAY 30th APRIL - Newmarket’s Rowley Mile Racecourse, home to the world famous QIPCO 2000 and 1000 Guineas, has staged a first in its 353-year history – a race for GUINEA PIGS.

Renowned as the ‘Home of Horseracing’, Newmarket and The Jockey Club swapped Thoroughbreds for household pets as part of a tongue-in-cheek film to help educate racegoers on the origins of its two best known races.

First run in 1809 and 1814 respectively the 2000 and 1000 Guineas are the first two Group 1 Flat races each season and the first two of the five ‘Classics’ run in each calendar year.

The races themselves get their name from the prize money originally offered to the winning horses, with one Guinea – a currency which was replaced by the pound in 1816 - equalling around £1.05. Today, however, the winners of the 2000 and 1000 Guineas take home more than £280,000 each.

Three-year-old colts contest the 2000 Guineas while fillies the same age take part in the 1000. Horses which compete in the two races often go on to run in the Investec Derby (for colts) or the Investec Oaks (for fillies) four weeks later at Epsom Downs Racecourse.

On this occasion Newmarket’s groundstaff team and the sport’s governing body, the British Horseracing Authority, allowed seven guinea pigs – all named after famous racehorses – to ‘run’ over two metres (rather than a mile) on the Rowley Mile’s official racing surface.

It was Too Darn Soft who ran out the winner, narrowly holding off Squeaking Lion in second and Rodent Dendron in third.

Each guinea pig wore bespoke ‘silks’ for the big race, with ITV Racing commentator Richard Hoiles calling them home. The action was captured for a special promotional film shot for Newmarket Racecourses, with presenters Ed Chamberlin and Derek ‘Tommo’ Thompson hosting the mock coverage which can be seen on social media and The Jockey Club’s website.

Amy Starkey, Regional Director of The Jockey Club’s East region, said: “Most people have heard of the 2000 and 1000 Guineas even if they don’t know much about horseracing.

“But when it comes to getting people talking about the races themselves we often find that it’s just the racing community which takes an interest and that most people have no idea about the origins of the races or why they are called ‘The Guineas’ in the first place.

“We thought this would be a fun way to get more people talking about the first two Classics of the Flat racing season.

“It’s certainly the first time we’ve allowed guinea pigs onto the course and it put a smile on a lot of people’s faces when we had them in the weighing room, the parade ring, the winners’ enclosure and out on the track.

“I’m sure the runners in the QIPCO 2000 and 1000 Guineas will set a bit more of a pace on Saturday and Sunday. It was an effort just to get some of these to go forwards, let alone in a straight line!”

Tickets are still available for both days > book now