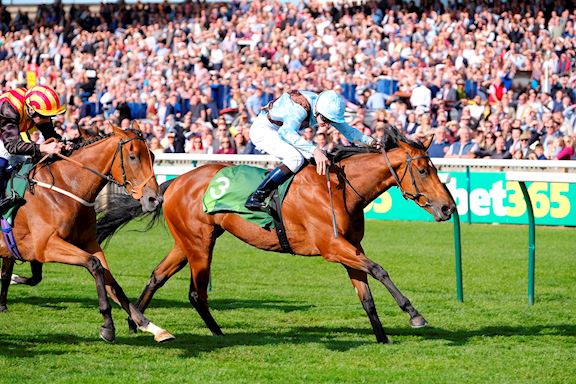 Newmarket’s Rowley Mile Racecourse was today reported to be in fine shape as a high class 23-strong entry was revealed for the Group 2 Roaring Lion Jockey Club Stakes – one of numerous early-season highlights at the Suffolk venue.

A £100,000 contest run over a mile and a half on Saturday, 4th May, the Roaring Lion Jockey Club Stakes is one of the main supporting races on the day the Rowley Mile stages the 211th running of the first Classic of the British flat racing season, the QIPCO 2000 Guineas.

Its entry is headed by five inmates of the yard of the Irish Champion Trainer, Aidan O’Brien, most notably the St Leger winner, Kew Gardens, and three from the stable of the reigning British Champion, John Gosden, including Wissahickon, winner of his last five races, and the four-time Group 1 runner-up, Coronet.

Another Group 1 ‘nearly horse’ among the entries is Salouen, caught on the line in last year’s Coronation Cup at Epsom and later sixth, one place in front of Kew Gardens, in the Prix de l’Arc de Triomphe.

Entries were also revealed for the £100,000 Group 2 Charm Spirit Dahlia Stakes, a nine furlong fillies and mares contest run on the Rowley Mile the following day, Sunday, 5th May.

A dozen are engaged here, including last year’s Group 1 QIPCO 1000 Guineas heroine, Billesdon Brook, and the globetrotting Nyaleti, winner of the German 1000 Guineas during a hectic 2018 campaign.

“The going on the Rowley Mile Racecourse is ‘Good’ and, one week before we begin our 2019 season, I am absolutely delighted with the condition of the track. Everything is in good order and I would say that it is approximately two or three weeks further forward than I would expect at this time of the year.

“We covered the course in fleece during February’s cold snap and the weather has been mild since, with intermittent rainfall, all of which has served to generate growth and thicken the sward further.

“The forecast for this week, leading up to the beginning of the bet365 Craven Meeting, is largely dry, but with some colder nights this week that could lead to frost in the mornings. Temperatures are forecast to rise as the meeting begins, reaching 15 or 16 degrees during the three days, which will make for fantastic conditions to enjoy a day at the races with the whole family.”

“Salouen is in great form and there is a good chance that he will make his 2019 debut in the Roaring Lion Jockey Club Stakes, it will either be there or the Buckhounds Stakes at Ascot a week later.”

“He found the ground a bit fast and the track a bit sharp when he went to Hong Kong in December but he’s wintered well and I’m delighted with him.”