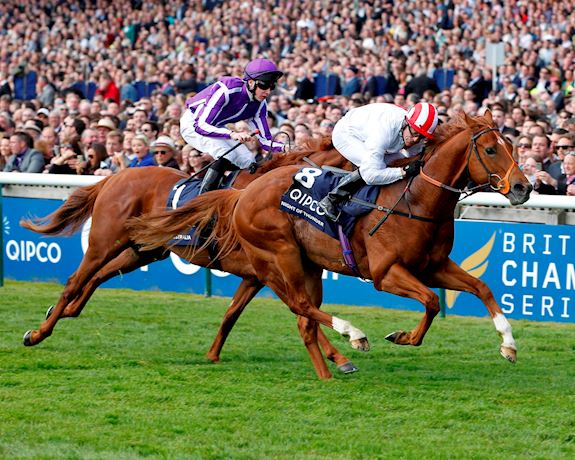 FIVE YEARS ON: MEMORIES OF THE EXCEPTIONAL 2014 RENEWAL OF THE QIPCO 2000 GUINEAS

3rd May 2019 – Today marks the fifth anniversary of one of the greatest renewals in the long history of the QIPCO 2000 Guineas, which will be run for the 211th time at Newmarket’s Rowley Mile Racecourse tomorrow (Saturday 4th May).

The 2014 running of this one mile Classic produced it’s biggest surprise in over 40 years when the Richard Hannon junior-trained Night Of Thunder prevailed by half a length at odds of 40-1, the longest since the 50-1 shot, Mon Fils, trained by Richard Hannon senior, triumphed in 1973.

But the race has since become famous for what its 14 runners went on to achieve on the racecourse, underlining the reputation of the QIPCO 2000 Guineas as one of the world’s highest calibre horseraces and as a pre-eminent stallion-creating event.

Yet the 2014 race is most remarkable for the subsequent exploits of the entire field, right down to the horse that finished 13th, Ertijaal, who went on to win in Group 2 company and collect almost £900,000 in career prize money, and Outstrip, the horse that trailed home in last but six weeks later finished third in the Group 1 St James’s Palace Stakes and is now a stallion, alongside Night Of Thunder, at Dalham Hall Stud in Newmarket.

The incredible strength-in-depth of the QIPCO 2000 Guineas of five years ago is illustrated by the following facts:

Where Are They Now?

Having tracked down some of the leading participants from five years ago, here are some memories of what the day was like and revelations of how their subsequent careers have progressed.


Kieren Fallon, jockey of Night Of Thunder (finished first, retired to stud at Dalham Hall Stud in Newmarket in 2015), said:

[Now retired, Fallon was winning his 16th British Classic but his first for almost eight years and, as it transpired, his last. The QIPCO 2000 Guineas was the only occasion he rode Night Of Thunder. He still rides out in the mornings in Newmarket.]

“Even now, the 2014 Guineas is a race I watch back on Youtube. And when Tiger Woods won the Masters recently I got texts and calls comparing it to my comeback to win the Guineas.

“I knew Kingman was the horse to beat but when he came past me I was pleased because I knew it would give me a target.

“Night Of Thunder then started to drift left-handed as we were coming with our run, we had the momentum and I didn’t realise that Joseph O’Brien was coming flying on my inside with Australia, so I let him drift. If I’d gone to gather him up and correct him we’d have been beaten.”

“What made the 2014 Guineas extra special for me was that I didn’t even have a ride in the race until five days before. Bruce Raymond rang me on the Tuesday to say that Richard Hannon was short of a jockey for Night Of Thunder and that I should give him a call, so I owe it to Bruce.

“The Rowley Mile is one of the hardest racecourses in the world to ride, your horse can ship left or ship right or come too soon or too late, it’s very, very difficult. I got a real kick out of riding the track because I knew it so well.”

“Kingman has made up into an incredibly attractive horse, he’s a stunning horse to look at.

“He’s very straightforward to deal with on a day-to-day basis, though he is a little bit impatient sometimes. He likes to get on with things and is always the first one up in the morning.

“He’s doing really well as a stallion and it would be fantastic if one of his sons could land the QIPCO 2000 Guineas and get him a Classic winner.”

[O’Brien retired from the saddle in 2016 and has since become a highly successful trainer, both on the flat and over jumps, from a yard in County Kilkenny, Ireland. He will saddle Iridessa in Sunday’s QIPCO 1000 Guineas]

“Australia was a very laid-back horse with a lot of class. He ran a serious race in the 2000 Guineas but was unlucky to be drawn on the wrong side which possibly cost him the race.

“The Guineas is always a hot race and that race was particularly strong – Australia’s performance left us looking forward eagerly to the Derby.”

“Now he is a proven stallion who has passed on his fantastic attitude to his progeny. The ones I have trained have really enjoyed their work and enjoyed their racing and I hope to be allowed the opportunity to train plenty more in the future.”

“Charm Spirit loves his second career and is an alpha male type. He used to be a boy but now he has really filled his frame and is a proper man.

“He’s been down to New Zealand and also goes over to France every other year and he’s proved very fertile. He can be tricky at times – he’s a pretty active horse who needs proper exercise – but we’ve formed a close bond.”

“For a little trainer from Spain like me, just getting the chance to play with the big boys in England was a dream fulfilled.

“Everybody said that we were crazy taking Noozhoh Canarias to Newmarket but he ran a blinder and in the end we were not so far off [from winning].

“At the time nobody really realised what we had achieved but it was a very strong Guineas and it was a beautiful experience – something really big that I will always look back on with pride.”

“Master The World is exactly the same now as he was then - a professional racehorse, sound as a pound and we all love him.”

“The press used to get on his case because, after he was touched off in the 2015 Cambridgeshire, he went two years without a win. But he’s won the Churchill Stakes [a Listed race run at Lingfield in November] for the past two seasons and a Winter Derby, which isn’t too bad.”

“Like myself, he’s got plenty of grey hairs and with advancing years he has got whiter and whiter. But though there is snow on the roof he still has fire in his belly!”

“He’s given his owners lots of wonderful days and wherever he runs he always has some kind of chance. He’s running as well as ever – consistently inconsistent – and he’s not finished yet.”

“The 2014 QIPCO 2000 Guineas was one of the best races I have been involved with during my time at Newmarket Racecourses. While there have been higher-rated winners of the race, such as Sea The Stars and Frankel, this renewal was by far the deepest in terms of the overall quality of the field and I am proud to have been associated with such a tremendous horse race.”