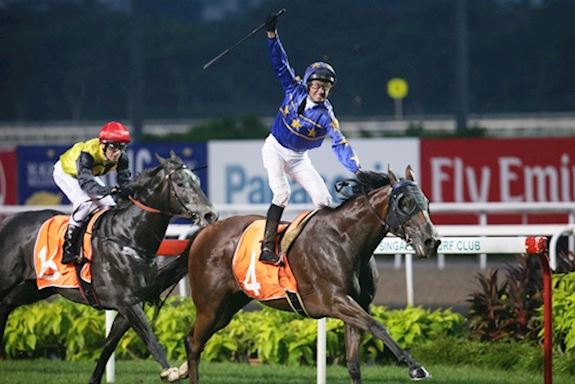 22nd May 2019 – Lim’s Cruiser, who on Saturday will bid to win Singapore’s top sprint, the Lion City Cup, for the third time, is one of 43 initial entries for the Group 1 Darley July Cup at Newmarket’s July Course on Saturday, 13th July.

Run over a straight six furlongs, this £500,000 event is the fourth of seven races in the Sprint category of the 2019 QIPCO British Champions Series.

Ever since the Japanese raider, Agnes World, became the first intercontinental winner in 2000, the Darley July Cup has acted as a magnet for international competition and Lim’s Cruiser is joined among the entries by the New Zealand-based speedster, Enzo’s Lad, a dual winner of the Group 1 Telegraph Handicap.

Stephen Gray, trainer of Lim’s Cruiser, knows what is required to ship a horse from Singapore to Britain as he saddled Emperor Max to finish seventh in the British Champions Sprint at Ascot in October 2014. Lim’s Cruiser has also already dipped his toes in international waters, finishing a close seventh in the Hong Kong Sprint last December.

The prestige of the Darley July Cup has been boosted in recent years as, since the inauguration of the Commonwealth Cup in 2015, it now represents the first occasion on the calendar for three-year-olds to take on their elders at Group 1 level over six furlongs.

The Classic generation looks sure to be well represented this time around as 18 (or 42 per cent) of the entries are three-year-olds. They include the unbeaten Kingman colt, Calyx, not to mention four Group 1 scorers in the shape of Advertise, Ten Sovereigns, Fairyland and Pretty Pollyanna.

The older horses among the entry are led by last week’s impressive Group 2 Duke Of York Stakes scorer, Invincible Army. Trainer James Tate is weighing up his options between Royal Ascot and the Darley July Cup for this son of Invincible Spirit.

Other leading candidates are Blue Point, winner of all three of his starts so far this term and successful in the Group 1 King’s Stand Stakes 11 months ago, plus two intriguing French contenders: Inns Of Court, runner-up in last October’s Group 1 Prix de la Foret, and City Light, touched off in the 2018 renewal of the Group 1 Diamond Jubilee Stakes.

“The chances of Lim’s Cruiser running in the Darley July Cup are quite good. He will run here in Singapore on Saturday and provided he pulls up well from that his trip to England is all arranged and already agreed.

“It’s not all about winning, your racing has a fantastic history and it’s about competing and being an advocate for Singapore racing. But I can assure you that I am taking this project very seriously and I’m not just coming over just to eat your Yorkshire puddings!

“He’s also entered in the Diamond Jubilee Stakes at Royal Ascot and the six furlongs with an uphill finish should be good for him as he relaxes beautifully and is a good strong finisher.

“I brought Emperor Max over and he ran very well at Ascot a couple of years ago, but this horse is better. He has a different style – he gets back and then hits the line strongly.

“It was nerve-racking when we came over last time but I found it quite simple to travel that far. I learned a lot and one thing that it taught me was that it makes sense to run horses two or three times while you are over as they tend to get better and better during the stay.”

“I couldn’t be happier with the way Invincible Army has come out of last week’s Duke Of York Stakes. He is fresh and well and is moving great.

“The Darley July Cup is a legendary race and is one of four obvious targets for him before the end of the season, alongside the Diamond Jubilee Stakes, the Haydock Sprint Cup and the British Champions Sprint. But he’s a colt with a great record when fresh so I wouldn’t expect him to run in more than three of them.”