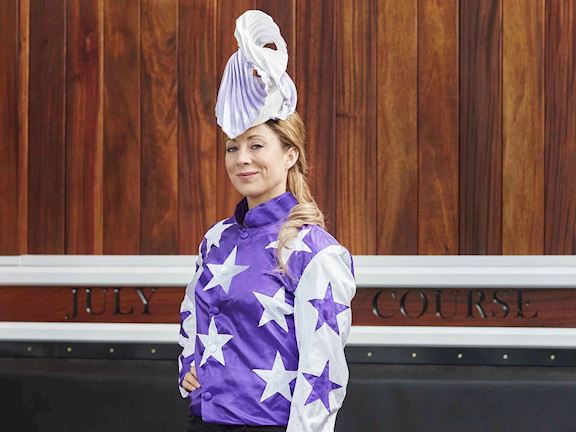 Leading jockey Hayley Turner, who on Friday broke a 32-year drought to become only the second woman to ride a winner at Royal Ascot, has swapped her riding helmet for stunning hats to celebrate the launch of horseracing’s first-ever Milliners’ Award at next month’s Moët & Chandon July Festival.

The first British female rider in history to win a Group One race got a head start on the competition as she teamed up with Ana Bella Millinery, the official milliner of Newmarket Racecourses, for a fashion shoot at The July Course.

The picturesque racecourse was the scene of one of her most famous victories in 2011, when she won the Darley July Cup on Dream Ahead.

Hayley, awarded the OBE for services to horseracing in 2016, became the first female jockey to ride 100 winners in a calendar year in 2008.

And, as these pictures show, not only has she got a head for race riding, but also one for fashion, pairing her racing attire with a series of stunning hats.

Set against the backdrop of the iconic July Course, The Style Awards, staged in partnership with Velvet Media, will return at next month’s Moët & Chandon July Festival, with the Best Dressed Lady crowned on the opening day, Thursday 11th July, before judges identify the Best Dressed Gentleman on Friday 12th July and the Best Dressed Couple on Saturday 13th July.

Adding to the offering this year, and in a first for British Racing, ladies attending on the opening day of the meeting will have the chance to emulate the runners on the track and win by a head, courtesy of the Milliners’ Award, which will see Ana Bella Millinery pick out the finest hat or fascinator on display.

The winner of the Milliners’ Award will walk away with a beautiful Ana Bella Millinery piece of their own.

“The Moët & Chandon July Festival is synonymous not only with outstanding racing but stunning fashion and headpieces are always among the most eye-catching elements of the style on show.

“We are delighted, therefore, to launch the Milliners’ Award this year and I have no doubt that, inspired by some of the amazing pieces modelled by Hayley, racegoers will raise the bar again in 2019.”

“Winning the Darley July Cup was one of the best days of my career and so the July Course will always have a special place in my heart. It was great fun to be back to try out some of Ana Bella Millinery’s wonderful designs.

“I hope her work can inspire racegoers to get creative for next month’s awards and I’m looking forward to seeing their efforts on the big day.”