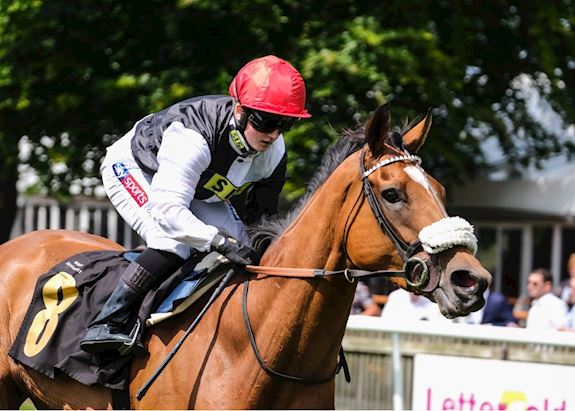 Saturday, 20th July - Dame Malliot looks to be a filly going places after she blew apart a competitive renewal of the Ric & Mary Hambro Aphrodite Fillies’ Stakes at Newmarket today.

Trained in Newmarket by Ed Vaughan and carrying the colours of Anthony Oppenheimer, made famous in recent seasons by stars such as Golden Horn and Cracksman, Dame Malliot was making her turf debut following two outings on the all-weather.

It was Hollie Doyle doing the steering and having found a lane for Dame Malliot along the near-side rail, the filly responded by powering away from her rivals to score by five lengths.

Spirit Of Appin took the runner-up honours, with Sparkle Roll, who came to the July Course having finished third in the Group 2 Ribblesdale Stakes at Royal Ascot, occupying the same place again today.

The winner is well bred, being by Champs Elysees, whose Billesdon Brook won the 2018 QIPCO 1000 Guineas, and out of the Galileo mare Stars In Your Eyes. Her pedigree, couple with the way in which she saw out today’s 1m4f trip, suggests she could get further still and Vaughan is eyeing the Group 2 Park Hill Stakes at Doncaster over two furlongs further.

“She’s so talented, this filly,” said Vaughan. “We expected her to win first time out, which she did. We went to Chelmsford with the penalty but she behaved badly beforehand and everything went wrong. She’s got a lot of ability and she’ll be given some big entries.

“I’d imagine the aim for this year at least would be the Park Hill at Doncaster. Goodwood is going to come too soon.”

Vaughan’s optimism about the prospects of Dame Malliot are well founded, given the fact that last year’s winner, Worth Waiting, went on to land the Group 2 Charm Spirit Dahlia Stakes at the QIPCO Guineas Festival at Newmarket’s Rowley Mile in May.

The 2019 renewal of the Aphrodite Fillies’ Stakes carried the names of Ric & Mary Hambro for the first time. Ric, the former Chairman of Newmarket Racecourse until his death in 2009, was a great supporter of racing, as was his wife Mary, a trailblazer in the bloodstock sphere, who passed away last year.