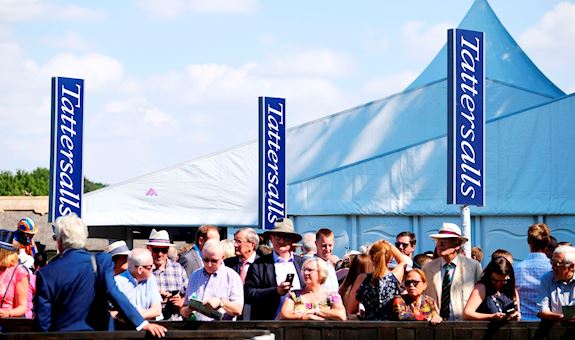 10th July 2019 – Just days after news broke of the career-ending colic attack suffered by William Haggas’s stable star, Sea Of Class, two more top fillies from his Newmarket yard, Beshaayir and One Master, get the chance to put a smile back on his face when they contest the Group 1 Tattersalls Falmouth Stakes at Newmarket’s July Course on Friday (12th July).

The racing highlight of the second day of the three-day Moët & Chandon July Festival and the fourth of seven races in the Fillies & Mares category of the QIPCO British Champions Series, this £200,000 one mile contest has attracted a classy field of six runners.

Beshaayir, who will be ridden by the hottest jockey on the planet at present in the shape of Frankie Dettori, has not run since her pillar-to-post victory in the Group 2 Lanwades Stud Stakes at The Curragh in late May.

Already a Group 1 winner in last season’s Prix de la Foret over seven furlongs, One Master was two and a quarter lengths adrift in fourth in the Lanwades Stud Stakes but progressed to take third place against the colts in the Group 1 Queen Anne Stakes at Royal Ascot last month.

She displayed a superb turn of foot that day to hit the front approaching the furlong marker only to be collared in the closing stages and go down by a length.

Roger Varian is a second Newmarket handler to be responsible for a third of the field as he saddles both Qabala and Mot Juste.

This pair, the only three-year-olds in the line-up, finished first and second in the Group 3 Lanwades Stud Nell Gwyn Stakes on Newmarket’s Rowley Mile Course back in April. They then contested the Group 1 QIPCO 2000 Guineas at the same venue, Qabala being sent off favourite and finishing third and Mot Juste trailing home in 13th having suffered interference.

Qabala is the only member of the duo to have run since, in the Irish 1,000 Guineas, but her ninth-placed finish there is best ignored as she scoped abnormally afterwards.

The field is completed by I Can Fly, third in the Group 2 Duke Of Cambridge Stakes last time out and previously runner-up to Beshaayir in the Lanwades Stud Stakes. She will be bidding to land a fourth straight Irish win in the Tattersalls Falmouth, her trainer, Aidan O’Brien, has been successful in both 2016 and 2017.

A superb field of seven two-year-old fillies will take part in Friday’s other Pattern Race, the six furlong Group 2 £80,000 Duchess Of Cambridge Stakes (sponsored by bet365).

They include Raffle Prize and Final Song, first and third in the Group 2 Queen Mary Stakes at Royal Ascot over five furlongs with Final Song now 3lbs better off, and Daahyeh and Celtic Beauty, who filled the first two places in the Group 3 Albany Stakes over this distance at Royal Ascot.

Bet365 also sponsors two big money handicaps on the card, most notably the one mile and six furlong bet365 Trophy over a mile and three-quarters which have more than doubled in value since last year to reach £120,000. It has attracted an impressive 18-runner line-up, headed by the former Group 2 Doncaster Cup winner, Desert Skyline.

The seven-race card commences at 1.50pm with 16 three-year-olds, including another Group 2 winner in Dark Vision, going to post for the £80,000 bet365 Handicap over a mile and a quarter.


William Haggas, the trainer of Beshaayir and One Master, said:

“One Master ran a fantastic race in the Queen Anne, at one point I thought that she had it in the bag. She travelled well and picked up well, she just didn’t see out the last half-furlong.

“She is a genuine, lovely filly, who might not quite be at her best over a mile, but she’s pretty good over seven furlongs – unfortunately, there is only one Group 1 race over that trip, the Prix de la Foret, which she has already won.

“We were toying with the idea of waiting for the Minstrel Stakes [a Group 2 event over seven furlongs at The Curragh on 20th July] but she is in good form and ready to go so we plumped for the Tattersalls Falmouth instead.

“One Master does seem to be at her best with some cut in the ground, so any rain would help her, though that wouldn’t suit Beshaayir, who wants it fast.

“Beshaayir has done very well since her Group 2 win, when she might have had a slight fitness advantage. She’s likely to make the running again on Friday, although I’ll leave that up to Frankie [Dettori].

“We decided to miss the Duke Of Cambridge Stakes with her because her owner [Sheikh Rashid Dalmook Al Maktoum] and I had another filly for that race, Move Swiftly, who won, and also because I believe Beshaayir is better fresh. So this race was always the plan.

“I have not had many shots at the Falmouth in the past but it would be a lovely race to win."