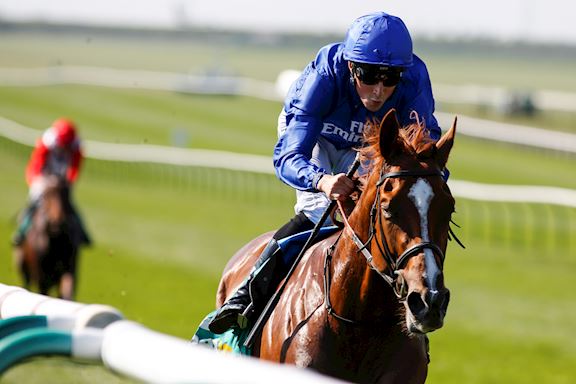 9th July 2019 – Last year’s Epsom Derby winner Masar continues his comeback from a year-long injury lay-off when he takes on five quality opponents in the Group 2 Princess Of Wales’s Tattersalls Stakes, one of numerous highlights on the first day of the three-day Moët & Chandon July Festival at Newmarket’s July Course on Thursday (11th July).

Trained in Newmarket by Charlie Appleby, Masar will be bidding to make it three consecutive triumphs in this £100,000 mile and a half event for his owner-breeders, Godolphin. They won it in 2016 with Appleby’s Hawkbill then retained the trophy with the Saeed bin Suroor-trained Best Solution.

Masar already has one outstanding piece of Newmarket form, albeit on the Rowley Mile Course rather than the July Course, landing last April’s Group 3 bet365 Craven Stakes by a gaping nine-length margin.

He went on to finish third in the QIPCO 2000 Guineas, then enjoyed his finest hour when giving Godolphin its long-awaited first Derby triumph.

Injury cost him the rest of his three-year-old season, and he had been absent for 385 days before he ran in the Hardwicke Stakes at Royal Ascot last month. That Group 2 contest did not go to script, as Masar stumbled badly leaving the stalls prior to racing keenly behind a steady pace, but he was still beaten less than five lengths in fifth place.

Mirage Dancer was three lengths in front of him in third and reopposes on the same terms. Trained by Sir Michael Stoute, who has won this race on a record nine occasions, Mirage Dancer was runner-up to Best Solution 12 months ago.

Other leading contenders are the recent Royal Ascot heroes Dashing Willoughby and Baghdad.

A 70,000 guineas yearling purchase at Tattersalls’ famed Book One auction in October 2017, Dashing Willoughby landed the Group 2 Queen’s Vase and is dropping down two furlongs in trip, while Baghdad is contesting a Group Race for the first time having landed mile and a half handicaps at the last two Royal Meetings - the Duke Of Edinburgh Stakes this year and the King George V Stakes last year.

The line-up is completed by October’s Grade 1 Canadian International Stakes winner, Desert Encounter, and Communique, successful in the Group 2 Roaring Lion Jockey Club Stakes on the Rowley Mile in May.

The opening day of the Moët & Chandon July Festival is stacked full of quality as there are two other Pattern Races not to mention the 20-runner bet365 Handicap Stakes, a £100,000 six furlong event for three-year-olds.

The most valuable race on the card is the one mile and five furlong Group 3 Bahrain Trophy, which has had its prize money increased by 75 per cent over the last two years to reach the £175,000 mark. It is a leading trial for the final Classic of the season, the St Leger, having produced the winner twice in the last eight years.

The final Day One feature is the £80,000 Tattersalls July Stakes, a prestigious Group 2 event for juveniles run over six furlongs. It has attracted eight runners, most notably the Group 2 Coventry Stakes third, Guildsman, and the brilliant course and distance maiden scorer, Visinari.

“Masar has enjoyed a faultless preparation since his run in the Hardwicke Stakes. We are confident that he is in as good a condition as we have ever had him and is the one they have to beat on Thursday.

“The Hardwicke didn’t pan out as we would have liked, he had that hiccough at the start, then they went steady and he was a bit free and had to come wide around the field. But he showed that his enthusiasm for the game is still there, had a nice blow afterwards and has come forward both physically and mentally since then.

“We were pleased with the way that he prepped going into that run, but running first up over a mile and a half at that kind of level was a big ask and there is nothing better than getting a race under your belt.

“The improvement that we hope we have seen since then means that we are confident that he can make up the three lengths on Mirage Dancer – provided Sir Michael’s horse hasn’t improved by another three lengths in the meantime!

“Comparing generations is always difficult but, while Hawkbill was a multiple Group 1 winner, Masar is a Derby winner so I would like to think that he has a bit more class than Hawkbill.”