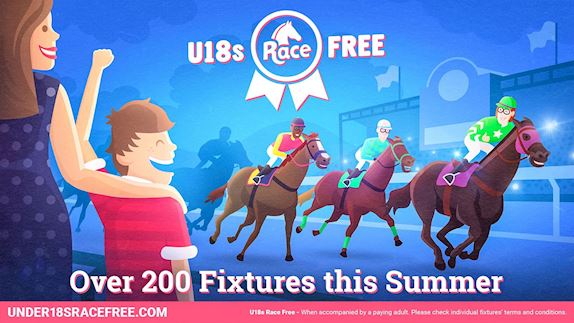 Children will be given the chance to go behind-the-scenes at Newmarket Racecourse next week, as part of Great British Racing’s Under 18s Race Free campaign

14 August 2019: Young visitors to Family Fun Day at Newmarket Racecourse next week (Friday 23 August) will be given the thrilling opportunity to get up-close-and-personal with a number of key raceday roles, including taking a special trip to meet the raceday commentator, going behind-the-scenes of the Weighing Room, and being made to feel like a racing VIP with a visit into the Parade Ring.

The Kids’ Takeover Day has been brought to Newmarket by Great British Racing as part of its Under 18s Race Free campaign, which has been created to highlight the fact that under 18s go free to almost every racecourse, at almost every raceday.

Facilitated by Racing to School, Kids’ Takeover Day is being rolled out at a number of racecourses across the summer by Great British Racing, and offers children unprecedented access to the races and the chance to turn their hand to some of horseracing’s greatest jobs.

In addition to the Kids’ Takeover, visitors to Newmarket’s July Course on 23 August can enjoy an exciting afternoon of horseracing, together with additional, family-friendly entertainment such as family sports day races and the Horseplay Roadshow, which gives children the chance to learn through role play and interactive games. There will also be visits from everyone’s favourite bear, Paddington, throughout the day. Incredibly, this is all completely free of charge for accompanied under 18s, with adult tickets starting at £13. All children will be invited to participate in the Kids’ Takeover Day on arrival at the racecourse.

Toby Shaw, Director of Communications & Marketing at Great British Racing, said: “Racing remains one of Britain’s most popular spectator sports, with millions enjoying the excitement of race meetings each year. At Great British Racing, we want to introduce more youngsters to the thrill of the sport: with more than 50 dedicated family days, our ‘Under 18s Race Free’ campaign provides an unforgettable day out in the fresh air for the whole family, without having to break the bank.”

Go to under18sracefree.com to find your local family raceday this Summer.