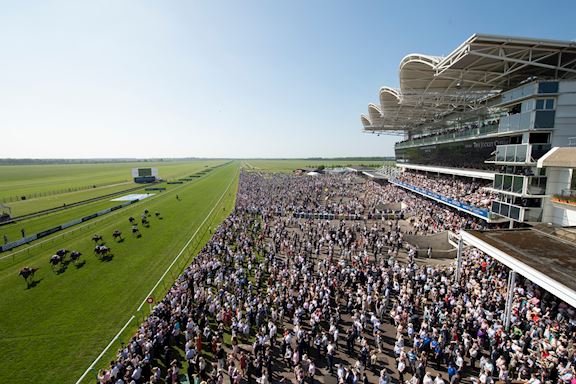 7th August 2019 – A star-studded entry of 31 fillies and mares has been received for the Group 1 Kingdom of Bahrain Sun Chariot Stakes at Newmarket’s Rowley Mile Racecourse on Saturday, 5th October.

No less than four Classic winners and eight different individual Group 1 winners are engaged in this £250,000 contest, which is run over a straight mile and is the penultimate leg in the Fillies & Mares category of the 2019 QIPCO British Champions Series.

But this race has long been a magnet for the best fillies from overseas, with five French victories in its last 11 runnings and three more of the winners during the same period travelling from Ireland, so it is no surprise that 18 of the 31 entries hail from outside Britain.

Obligate, the winner of the Group 2 Prix de Sandringham who lost her unbeaten record when finishing third to Laurens in last month’s Prix Rothschild, is part of an eight-strong French contingent alongside Watch Me, successful in the Group 1 Coronation Stakes at Royal Ascot, and the Group 1 Poule d’Essai des Pouliches winner, Castle Lady.

Triumphant in both this year’s Group 1 QIPCO 1000 Guineas and its Irish equivalent, Hermosa is one of 11 potential Irish runners alongside two more dual Group 1 scorers, Magical and Iridessa.

“I have never previously had a runner in the Kingdom Of Bahrain Sun Chariot Stakes but it is under strong consideration as a possible target for Obligate.

“The other likely race for her is the Prix du Moulin [at ParisLongchamp on 8th September] but I need to talk through her programme with Teddy Grimthorpe [racing manager to Obligate’s owner-breeder, Prince Khalid Abdullah].

“Obligate ran very well in the Prix Rothschild, which was her first try on a straight course, only losing out to two crack four-year-olds. Travelling to Newmarket is very easy and I would also not be worried about her handling the Rowley Mile’s undulations.”

Hosted across ten of the UK's leading racecourses it encompasses the top British racing festivals, including the QIPCO Guineas Festival at Newmarket, the Investec Derby Festival at Epsom, Royal Ascot, the Moët & Chandon Newmarket July Festival, The Qatar Goodwood Festival, the Welcome to Yorkshire Ebor Festival at York and the William Hill St Leger Festival at Doncaster.

Newmarket Racecourses is part of The Jockey Club which stages thrilling sporting occasions including The Randox Health Grand National, The Cheltenham Festival and The Investec Derby. Millions of people every year enjoy the special experiences we offer through racing, music, food and entertainment. Governed by Royal Charter, every penny we make goes back into British Racing to help the sport thrive. We were founded in 1750 and today we are the largest commercial group in Britain’s second-biggest spectator sport, operating 15 racecourses nationwide, The National Stud, Jockey Club Estates, Jockey Club Catering, Jockey Club Live and our charity, Racing Welfare. For more information visit www.thejockeyclub.co.uk.