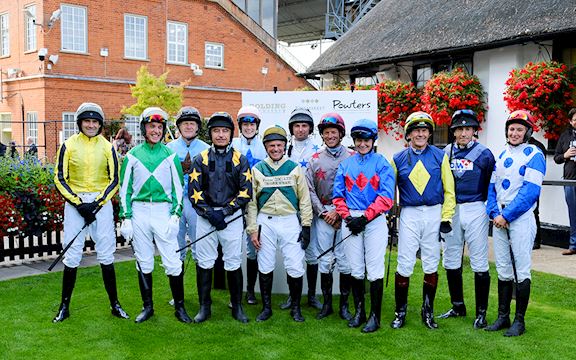 21st August 2019 – Amateur riders from all over Britain are set to take part in Saturday’s (24th August) 350th running of the Newmarket Town Plate at Newmarket’s July Course.

A field of 12 runners, partnered by jockeys of varying age and experience, will contest the historic event, which will take place following the completion at 5.05pm of a seven-race card of regular races and before music act ‘Massaoke’ bring the curtain down on racing at the July Course for another year by performing ‘The Greatest Show’, a selection of the greatest singalong tunes in history.

The Newmarket Town Plate has been run at Newmarket’s Round Course since 1666. The race was instigated by King Charles II, who also won the first running and stated that it should be run ‘forever’.

Sponsored by Newmarket-based businesses Golding and Powters, the historic contest is run over a stamina-sapping three-and-three-quarter mile course, much of which is only used for this single race each year but ending on the same home straight as all races at the July Course.

Once one of the most prestigious races in the land, the Town Plate is now a pinnacle of glorious historical eccentricity, competed for by true amateurs and boasting a jockeys’ prize of a Perpetual Challenge Plate; a photo frame; a voucher from the Newmarket High Street clothes shop Golding; and a box of Powters Celebrated Newmarket Sausages.

Tim Vaughan, a racehorse trainer from Cowbridge in South Wales, will be race-riding for the first time in over 12 years.

“It’s my 40th birthday on Sunday and when Anna Metekohy from Newmarket Racecourses mentioned the Town Plate to me last winter I thought that it would be the ideal excuse to get back in shape, lose some weight, and show two of my kids, who are both riding mad, what I could do before I was too old!

“Ed, my eldest, is 11 years old and has won 70 pony races, including last weekend when he became the youngest child either to take part in or win the famous Dingle Derby in the west of Ireland. Grace is a year younger and this year has qualified four different ponies for the Horse Of The Year Show.

“The Town Plate gives me a chance to show them what I can do before it is too late. I represented Wales at Show Jumping when I was younger and was also twice Champion Welsh Point-To-Point rider, winning a total of 117 races, before my training career began to take off and I retired at the age of 27.

“It’s such a historic race that it’s a privilege to be involved, even if it hasn’t always seemed so enjoyable while I have been dieting to lose three stone.”