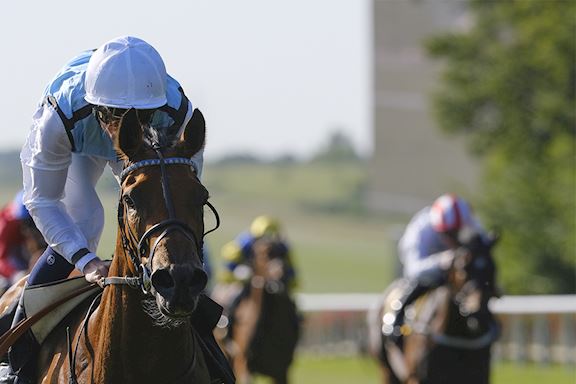 This seven furlong contest for two-year-old fillies carries prize money of £50,000 and is being sponsored by German Thoroughbred Marketing for a tenth consecutive year.

A daughter of the leading first-season sire and QIPCO 2000 Guineas winner, Gleneagles, Ultra Violet made a stunning debut over six furlongs of this course six weeks ago, storming home by eight lengths in the Techtrack British EBF Maiden.

She hails from the Newmarket yard of Ed Vaughan, who is bidding for just a second Pattern Race success of his 15-year training career, and will again be ridden by 23-year-old Kieran Shoemark, himself on the hunt for a second ever Group victory.

Her eight rivals include Charlie Appleby’s Light Blush, successful in a maiden at the Moët & Chandon July Festival at this track prior to taking second place in last month’s Listed Star Stakes at Sandown Park. Two more of the Star Stakes field, fourth-placed Romsey and fifth-placed West End Girl, will take her on again.

Pattern Race form is represented by Dark Lady, a staying on fourth in the Group 3 Princess Margaret Stakes at Ascot a fortnight ago, while Soffika and Dalanijujo are both, like Ultra Violet, winners of their solitary starts to date.

“Ultra Violet would rate as one of the most exciting two-year-old prospects I have ever had.

“She did her best ever piece of work on the Watered Gallop last Saturday and we are very much looking forward to the Sweet Solera Stakes.

“That latest work really pleased me as she’s never previously been the greatest work horse, in fact she wouldn’t impress you walking, trotting or cantering, so the margin of victory on her debut was a surprise. She obviously saves her best for the track.

“I declared her to run in the Princess Margaret [at Ascot on 27th July] but it was an easy decision to take her out of that when the ground went soft – we knew right back in the spring that she didn’t go very well on soft ground, it’s a case of ‘the faster the better’ for her.

“I don’t know what will end up being her best trip, she might get a mile, but we always felt that she would benefit for this step up to seven furlongs.”

Newmarket Racecourses is part of The Jockey Club which stages thrilling sporting occasions including The Randox Health Grand National, The Cheltenham Festival and The Investec Derby. Millions of people every year enjoy the special experiences we offer through racing, music, food and entertainment. Governed by Royal Charter, every penny we make goes back into British Racing to help the sport thrive. We were founded in 1750 and today we are the largest commercial group in Britain’s second-biggest spectator sport, operating 15 racecourses nationwide, The National Stud, Jockey Club Estates, Jockey Club Catering, Jockey Club Live and our charity, Racing Welfare. For more information visit www.thejockeyclub.co.uk.