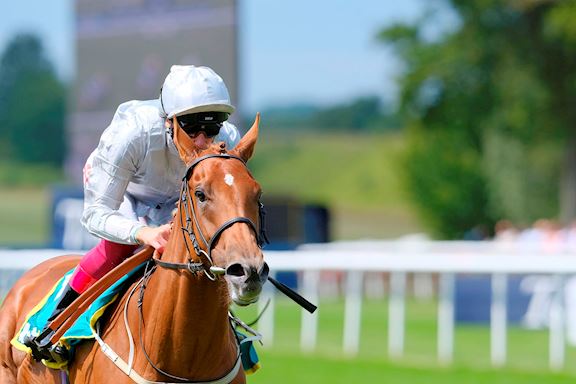 11th September 2019 – Raffle Prize, already a dual Group 2 winner against her own sex and narrow runner-up behind the unbeaten colt, Earthlight, in the Group 1 Prix Morny, is set to take her chance in the Juddmonte Cheveley Park Stakes, one of the two showpiece races on a £915,000 Juddmonte Day card at Newmarket’s Rowley Mile Racecourse on Saturday, 28th September.

Raffle Prize is part of a 31-strong entry following yesterday’s scratching stage for this £275,000 Group 1 six furlong event while Earthlight is one of 33 remaining entries for the same day’s other £275,000 Group 1 over the same trip, the Juddmonte Middle Park Stakes.

The seven-race Juddmonte Day card also features the £160,000 bet365 Cambridgeshire Handicap and is the second of four consecutive Saturdays of exciting racing on the Rowley Mile which make up The Newmarket Gold Season.

Then, following a Chester maiden win, she landed the Group 2 Queen Mary Stakes at Royal Ascot before taking her revenge on Daahyeh, this time conceding 3lbs, in the Group 2 Duchess Of Cambridge Stakes (sponsored by bet365) at Newmarket’s Moët & Chandon July Festival.

Her most recent run saw her go down by a neck to Earthlight on holding ground in the Morny, the pair pulling two and a half lengths clear of a strong field.

Other leading Juddmonte Cheveley Park Stakes entries are Living In The Past and Liberty Beach, first and second in last month’s Group 2 Lowther Stakes, and Tropbeau, successful in the Group 2 Prix du Calvados and, like Earthlight, trained in France by Andre Fabre.

Golden Horde, conqueror of Threat in the Group 2 Richmond Stakes before finishing third in the Morny, is also engaged while an 11-strong Irish contingent is headed by the Juddmonte home-bred, Siskin, who took his record to a perfect four-from-four in the Group 1 Phoenix Stakes at The Curragh a month ago.

Mark Johnston has two Juddmonte Middle Park hopefuls, last Saturday’s Group 3 Sirenia Stakes third, Huraiz, and Fuwayrit, winner of both his starts since being caught on the line on his Goodwood debut.

Yesterday was also a scratching stage for the Group 2 Juddmonte Royal Lodge Stakes, a one mile contest which completes the trio of Juddmonte-backed juvenile Pattern events on the Rowley Mile on 28th September.

Irish Champion Trainer Aidan O’Brien has already won this £125,000 event on six occasions and is responsible for 23 of the remaining 47 entries including the Group 2 Futurity Stakes hero, Armory.

“The Juddmonte Cheveley Park Stakes was the only place we wanted Raffle Prize to go after her run in the Morny. She’s in great order and it’s been ‘all systems go’ with her since France.

“She did everything bar win a very good renewal of the Morny. That performance proved that she was the leading filly in Europe and we’ve not seen anything since, in the Lowther Stakes or anywhere else, that might scare us.”

“If she turns up at Newmarket in the same form as we had her in France she should take plenty of beating.”

“Raffle Prize handled the heavy ground in the Morny simply because she is very good, but I’m pretty sure that testing ground does not play to her strength as she has so much speed. It was Earthlight’s stamina that came into play and won him the day in the last 100 yards.”

“She’s only had five starts and they’ve been nicely spaced out, so she’s not had a crazily busy campaign and we are looking forward to Newmarket. Win, lose or draw, that is almost certain to be her last start of the season.”

“Her potential stamina over more than six furlongs is a question for next spring, though I would like to think that any filly who wins the Cheveley Park would be given a Guineas preparation with the option of then dropping back in trip for the Commonwealth Cup.”

“Huraiz pleased us with his third place in the Sirenia Stakes, it showed that he was a genuine Group horse. He is still a level below what would be required to be competitive in the Juddmonte Middle Park but is a lightly-raced colt with plenty of improvement in him.”

“We’ve always thought a bit of Fuwayrit, hence we sent him to Glorious Goodwood first time out. He could use either the Mill Reef Stakes at Newbury or the Harry Rosebery Stakes at Ayr as a stepping stone to the Middle Park.”