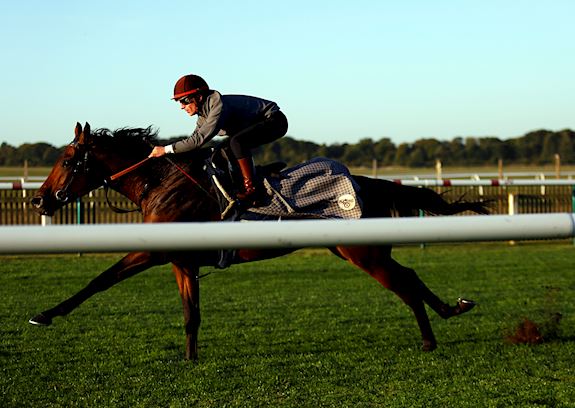 21st September 2019 – UAE Jewel pleased connections with a racecourse gallop at the Rowley Mile on Saturday morning, as trainer Roger Varian eyes a shot at Friday’s Group 2 Shadwell Joel Stakes with the undefeated son of Dubawi.

The three-year-old was one of the stars of the spring season on the Rowley Mile, winning the bet365 Wood Ditton Maiden Stakes by an eye-catching five lengths in April, before returning the following month to land the Listed Lightning Spear Newmarket Stakes.

Absent since, a run in the Shadwell Joel Stakes would represent a drop in trip from the 1m2f of the Lightning Spear Newmarket Stakes to 1m, and it was that distance over which the colt worked on Saturday morning.

Ridden by Andrea Atzeni, UAE Jewel comfortably pulled clear of his work companion by the time they hit the line, leaving the impression that should connections opt to allow him to take his chance in Friday’s race, he would have every chance of extended the unbeaten start to his career to three.

The racecourse gallop was the first action of the opening morning of The Newmarket Gold Season which, over the next four weeks, will celebrate everything that makes Newmarket special during a period when the eyes of the racing and breeding worlds are on the town.

UAE Jewel is a fine representative of the joined-up nature of Newmarket’s racing eco-system. Trained by Roger Varian on the town’s fabled Bury Road, he is by Dubawi, Darley’s champion sire who resides at Dalham Hall Stud and is one of a number of world-renowned stallions now standing in Newmarket.

Varian came to train the colt after he went to 400,000 guineas during Book 1 of the Tattersalls October Yearling Sale in 2017 and, should he run in the coming week, plenty will be watching with interest from outside the Varian stable as well as within it.

That is because UAE Jewel’s half-sister, a filly by Juddmonte’s emerging superstar sire Kingman, has been catalogued for Book 1 of this year’s Tattersalls October Yearling Sale, where she will be offered by Highclere Stud. The more UAE Jewel can enhance his reputation, the more attractive his blood relative becomes.

Amy Starkey, Regional Director of The Jockey Club’s East Region, said: “It is wonderful to be back at the Rowley Mile for the start of The Newmarket Gold Season and a pleasure, on what was a beautiful morning, to see a horse like UAE Jewel warming up for a potential run here in the coming days.

“His story, and the potential of what could be to come, perfectly encapsulates what The Newmarket Gold Season is all about. Events on the track will have direct consequences for buyers and selling down the road at Tattersalls, which is one of the many reasons the racing we will stage over the next four weeks is so important.”