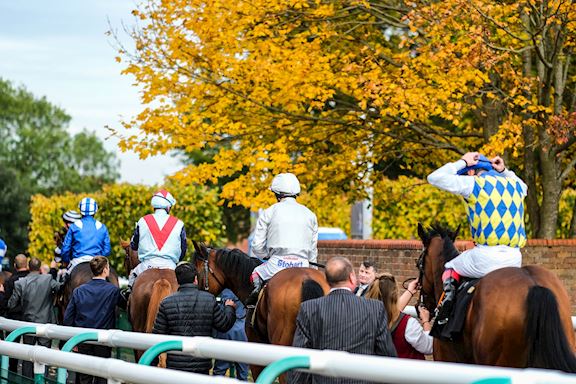 29th October 2019 – Newmarket Racecourses is preparing to crown the leading owner, trainer and jockey when its 39-meeting season concludes this weekend and the race for supremacy in the training ranks remains too close to call.

Introduced for the first time in 2019, the prizes were devised to better engage and inform racegoers, while recognising the enormous contribution to our sport made by owners, trainers and jockeys throughout the season.

With only the two days of The Final Meeting, this Friday and Saturday, left at Newmarket Racecourses in 2019, Mark Johnston and Charlie Appleby are neck-and-neck at the top of the standings with 19 winners each.

Mark Johnston’s powerhouse Yorkshire stable has been victorious at the Home of Horseracing this season with stars such as Raffle Prize, who was an excellent winner of the Duchess of Cambridge Stakes (sponsored by bet365) at the Moët & Chandon July Festival in the summer, a filly who could head to the Rowley Mile next May for the QIPCO 1000 Guineas.

Charlie Appleby, who trains in Newmarket for Godolphin, is another with serious Classic aspirations for 2020, with Darley Dewhurst Stakes winner Pinatubo by far the best of the 19 winners he has saddled at his local courses this season.

The pair sit four winners clear of Newmarket’s Roger Varian, while Richard Hannon, a Group 1 winner at the Rowley Mile earlier this month with Billesdon Brook, is fourth with 14 winners.

Both could be well represented at the meeting, with Johnston and Appleby having entered a number of runners across Friday and Saturday. The former has nine contenders in line for a run on Friday and seven on Saturday, with Matterhorn doubly entered on day two. Appleby, meanwhile, has entered six horses across Friday’s card and a further two on Saturday, with Boccaccio holding an entry on both days.

Should Appleby overcome the challenge of Johnston, it would cap a fantastic season at Newmarket Racecourses for Godolphin, who head into the weekend with an unassailable lead in the chase for the owner prize.

Pinatubo is one of 31 to have scored in the famous Godolphin blue, with the likes of Saeed Bin Suroor’s Military March another exciting prospect, having led home a Godolphin one-two in the Group 3 Dubai Autumn Stakes at the Dubai Future Champions Festival.

Godolphin could, in theory at least, have completed a clean sweep of the honours, with one of their retained riders, William Buick, only two winners behind the leader Oisin Murphy.

Murphy, who was crowned Britain’s Champion Jockey for the first time earlier this month, has 18 winners to Buick’s 16 but with the latter riding at Santa Anita in the Breeders’ Cup World Championships, there will be no change at the top. Ryan Moore, who will also be in California this weekend, is third with 12 Newmarket winners in 2019.

“It has been wonderful to track the progress of owners, trainers and jockeys competing at Newmarket Racecourses this season.

“We are grateful, as always, for their hard work and dedication, which has produced racing that has thrilled and delighted us during the year. My congratulations go to Oisin and Godolphin for their outstanding seasons.

“It is fantastic that one of the categories has come down to The Final Meeting and I wish Mark Johnston and Charlie Appleby the very best with their runners across the two days.” 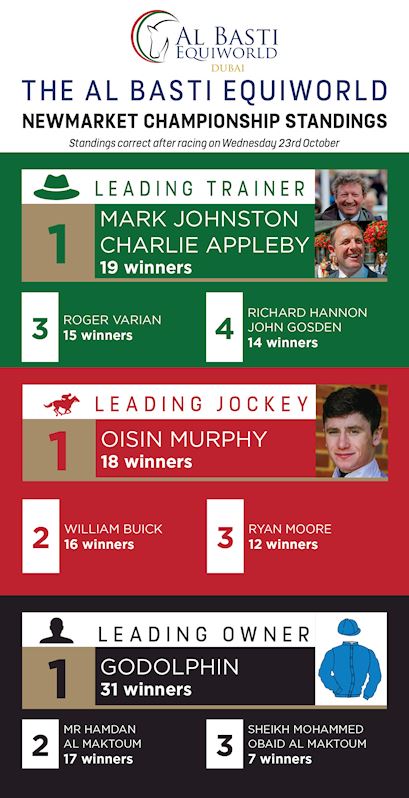