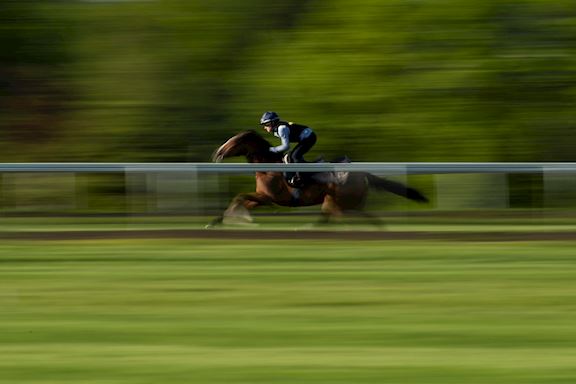 Thursday, 28 May - Prior to the scheduled return of racing on the Rowley Mile on Thursday 4th June, Newmarket Racecourses and Jockey Club Estates are keen to ensure that the town’s residents are aware of measures in place that will affect those who use the Heath and Training Grounds for their own exercise.

In order to stage racing safely and to meet the criteria agreed with government for racing “behind closed doors”, on Newmarket racedays the public will be asked not to exercise on the areas of Jockey Club owned property to the west of the Hamilton Road. The designated public footpath on the Devil’s Dyke will remain open for use.

From Thursday 28th May signs will be put up informing the public and on racedays there will be barriers in place barring entry to vehicles. However, in the evenings, from 7.30pm, an hour after the final race, the public can use the areas in question.

Subject to government approval, next week heralds the return of racing at Newmarket on the Rowley Mile, albeit behind closed doors with no members of the public allowed on site. The action is due to start on Thursday 4th June and the four-day meeting features the Group 1 Coronation Cup, moved from Epsom Downs, on Friday before concluding with the QIPCO 2000 Guineas on Saturday and the QIPCO 1000 Guineas on Sunday.

Nick Patton, Managing Director of Jockey Club Estates, said: “We appreciate how valuable an asset having the Heath available for afternoon exercise has been for many Newmarket residents, especially since government restrictions due to the Covid-19 pandemic were put in place.

“For members of the public who use what is called ‘Racecourse Side’, off the Hamilton Road, we ask that you refrain from exercising there on the upcoming racedays and suggest maybe using other areas of the estate, which remain open to the public from 1pm, on the east side of town, such as Warren Hill, Side Hill or Waterhall.

“We want to forewarn people of these measures in advance, so that it is neither a surprise nor an inconvenience to them next week and for the racedays that will follow while the current level of restrictions remain in place.”

Amy Starkey, who runs Newmarket Racecourses as East Regional Director for Jockey Club Racecourses, said: “Having racing back on at Newmarket is vital not only for the wider sport but also for the local economy and the thousands of people in the region whose livelihoods depend on the racing and breeding industry.

“We start with four fantastic days of racing on the Rowley Mile in terms of the quality of horse that will be involved, and from that perspective it is very exciting. Delivering the racing while adhering to the agreed measures will represent a challenge but one that we are absolutely prepared for.

“Integral to staging racing safely is ensuring that only accredited individuals are on or close to the site on a raceday. Consequently, the Jockey Club-owned land that is usually open to the public adjacent to the Rowley Mile will be patrolled and these measures need to be enforced because if we do not abide by them then we risk jeopardising our licence to race.”

Nick Patton added: “We are already grateful to Newmarket residents for their patience and understanding that, for the sake of the horses’ welfare, the town’s racehorse population needed to continue to be exercised during lockdown. And now we ask again for their co-operation so that racing can safely return to Newmarket, which in turn will bring significant benefits to the local economy.”

The exact timetable for the resumption of racing will remain subject to agreement from government and an assessment by public health officials of the risks posed by the virus at that time.

Horseracing’s guidelines have been developed in consultation with officials from Public Health England and a group of cross-sport Chief Medical Officers, and drawn up under the direction of the British Horseracing Authority’s Chief Medical Advisor, Dr Jerry Hill. They are aligned with the government guidance for the return of elite sports published so far but can be adapted if required by subsequent guidance.