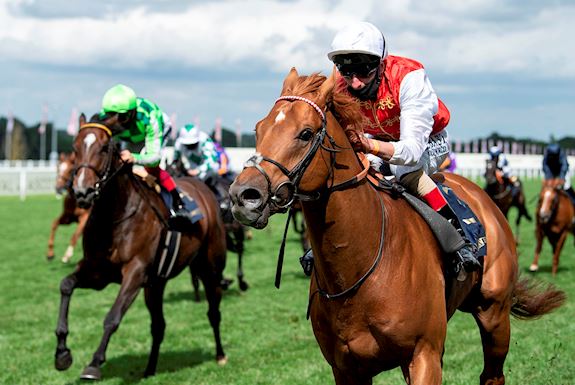 The Group 1 Darley July Cup Stakes, a QIPCO British Champion Series race, is a race that Clive Cox knows how to win. He landed the six-furlong contest in 2013 with Lethal Force and more recently in 2017 with Harry Angel and believes that Golden Horde, who bet365 make the 5/2 favourite, has everything it takes to give him a third Darley July Cup.

Golden Horde - owned by Al Mohamediya Racing - was a smart two-year-old, winning the Richmond Stakes (Group 2) at Goodwood and was placed in two Group 1s including second in the Juddmonte Middle Park Stakes on Newmarket’s Rowley Mile course, but he took that form to another level when winning the Commonwealth Cup (Group 1) on his first start at three at Royal Ascot.

“I think he was a pretty good two-year-old,” said Cox. “He won his Group 2 very well after a promising run in the Coventry Stakes. He was always a very big framed horse and he has now strengthened into that frame. We were over the moon with the progress he made over the winter and he clearly showed that well-being and potential at Ascot.”

Reflecting on his win at Royal Ascot, which came without a prep run, Cox added: “It was a very strange year for everybody. Going to Royal Ascot without a prep run was a mild concern because at this level, you don’t want to be lacking in any respect, but he travelled so well through the race and quickened away really nicely. It was a proper, high-class Group 1 and I’d like to think that run will put him even closer to perfect. He’s entitled, as any horse after their first run of the season is, to take that step forward.”

Cox, who also landed the Coventry Stakes (Group 2) at Royal Ascot, is very happy with the gap and preparation he has had since Royal Ascot.

“We had a tremendous Royal Ascot and all of our horses have been running really well. We’ve been able to freshen him up and he’s now very well in himself. My head lad Martin Berry rides him every day and he’s over-the-moon with him. I’m very happy.”

He is stepping up into open company for the first time against older horses and Cox is aware of the challenge that poses. “For any horse in the sprinting department, I think it’s the physical strength that sees that progress, but I think he’s ready for that. Clearly, he’s a good bodied and strong horse so I’m very much looking forward to it.”

“Harry Angel won the race as a three-year-old for us and Lethal Force won it as an older horse but I’m as excited about Golden Horde’s chances as I was about those two before.”

Cox added: “Golden Horde is by Lethal Force who holds the course record in the race. He has similar qualities to his father, but Golden Horde has an ability to act on any ground, whereas Lethal Force was not as effective on softer ground. He (Golden Horde) won the Richmond at Goodwood last year on quick ground and won at Ascot with give, so he’s very versatile which is a very good quality.”

“Harry Angel was pure class and his performance at Newmarket in the Darley July Cup when beating the likes of Caravaggio and Limato was very good. It’s an amazing race and it’s a real thrill to be going into a race like this with a huge chance.”

Golden Horde’s success at Royal Ascot was a landmark victory for Bahraini owners Almohamediya Racing and Cox was over the moon to provide them with their first Group 1.

“It was a huge thrill to win a Group 1 at Royal Ascot for Sheikh Sultan and Almohamediya Racing. He has been a huge supporter of ours, he loves his horses and has a huge knowledge of the sport. Let’s hope there are many more!”