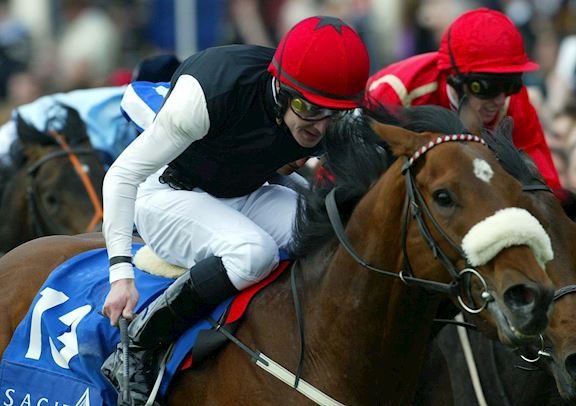 Newmarket in mourning following the passing of Pat Smullen

Newmarket Racecourses is united with the racing world in grief this morning following the death of Irish riding legend Pat Smullen at 43.

Universally admired for his skill in the saddle and his personality out of it, Smullen won races at the highest level across the globe, including two Group races at our own Rowley Mile racecourse.

The first came in 2002, when he partnered Dress To Thrill to win the Sun Chariot Stakes, then a Group 2 contest, for trainer Dermot Weld, a man with whom his fortunes would be so closely intertwined throughout his career.

Dress To Thrill went on to land the Grade 1 Matriarch Stakes at Hollywood Park for the pair to round out that campaign but the best was yet to come for them as far as Newmarket success was concerned.

In the following May of 2003, Smullen and Weld were celebrating 2,000 Guineas glory courtesy of Refuse To Bend, who held off Zafeen to score by three quarters of a length in Britain’s first Classic of the summer.

It is fitting that Smullen should be associated with a horse by the name of Refuse To Bend, as he will forever be remembered for his courage in the face of his pancreatic cancer diagnosis, which came in March 2018.

Smullen transcended the sport to become an inspiration for those living with the disease, at first being given a clean bill of health following initial treatments.

He would go on to use his platform to maximum effect, throwing himself into fundraising efforts for Cancer Trials Ireland. Such was his standing in the racing community, he was able to pull together a legends race for the ages at last year’s Irish Champions Weekend at Leopardstown.

Amy Starkey, Regional Director of Jockey Club Racecourses’ East Region, said: “Everybody in Newmarket is heartbroken this morning after learning of the passing of Pat Smulllen. He was an outstanding jockey, a brilliant ambassador for our sport and, most of all, a wonderful person.

“The racing community is a close-knit one and I know that, despite our grief, we will rally around Pat’s family and friends in the days and weeks to come so that they feel the love, admiration and respect we all have for Pat and his legacy in the sport.”

Pat Smullen rode 1,892 winners in Britain and Ireland, including aboard Harzand in the Derby at Epsom in 2016.

He is survived by his wife Frances and their three children, Hannah, Paddy and Sarah.