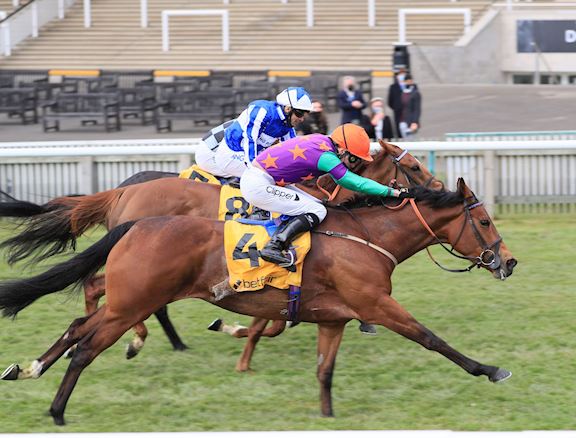 Betfair responded by slashing the five year old mare to 25-1 from 66-1 for the Al Shaqab Lockinge Stakes at Newbury in just under a fortnight (May 15th), with winning trainer Jarvis admitting he could be tempted by the Group One prize.

A 6-1 chance today, Lady Bowthorpe was settled at the rear of the seven runner nine furlong contest before beginning to make a forward move three furlongs from home under jockey Kieran Shoemark.

The daughter of Nathaniel progressed to take up the running just inside the final furlong and kept on to defy 2-1 favourite Queen Power by a head, with Lavender’s Blue another neck away in third.

Today’s contest was Lady Bowthorpe’s first start of 2021. Last season she progressed through handicap company to win the Group Three Valiant Stakes at Ascot in July and rounded off the campaign by finishing sixth in the Group One
Kingdom Of Bahrain Sun Chariot Stakes over the Rowley Mile in October.

Successful trainer William Jarvis said: “She is very good. She looked amazing at Ascot when she won her Group Three. Maybe things didn’t go quite right at Sandown as she had a penalty and then the Sun Chariot was maybe a step too far for her on very heavy ground.

“This last week she has really come to hand and I was desperate to run her today. We were concerned about the ground. I walked the course a couple of times and I considered it was going to be quick ground but that it was going to be safe racing ground so we let her take her chance.

“She is a very special filly and I think as the year goes on she will hopefully continue to improve. She was in such good health and she was crying out for a run. I would have had to wait a fortnight maybe for the Middleton or the Lockinge and I felt this was the right place for her.

“She is just a bit tricky and she takes minding. She went away for the winter to Emma Banks’ (owner) family farm and they did a really good job with her. My head person and the girl that looks after her do a really special job. She takes some managing but that’s the nice thing - tricky women sometimes give you the most pleasure!

“She has got the Duke Of Cambridge entry and I didn’t put her in the Queen Anne as if we can keep her to her own sex it is in her favour. We will have a talk about the Lockinge. I would have thought we would have probably given it a swerve but if Palace Pier frightens enough away we may just take our chance. It’s a big thrill.

“We’ve not got a lot of horses so when you have a good one you have to make the most of it and we will endeavour to do that. Any winner is great but I was born and bred in Newmarket and I’ve lived here all my life and that makes it special. I think we can go 10 furlongs with her but I think eight to 10 is fine for her.”

James Horton, assistant to Sir Michael Stoute, said of runner-up Queen Power: “We’re very pleased with that it was a good starting point. She’s come here and done everything right and finished off well, only just being beaten on the day, so we’re pleased.

“I hope there’s some nice opportunities for her. We’ll see where the programme book takes us from today. She’s a Listed winner and it would be nice to get some nice black type going forward.”