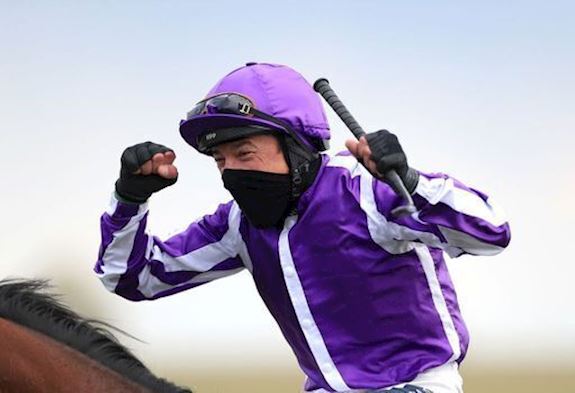 Day two of Newmarket’s QIPCO Guineas Festival is all about the girls, with some of British racing’s leading three year old fillies putting down a marker for the rest of the season.

Not only is the QIPCO 1000 Guineas the second Classic of the Flat racing calendar, the Listed Betfair Pretty Polly Stakes throws up some contenders for the Cazoo Oaks at Epsom Downs a month later and the Betfair Dahlia Stakes is as competitive as they come.

We haven’t got all the statistics dating to back to when the QIPCO 2000 and 1000 Guineas were first run but we’re willing to wager there won’t have been too many occasions when the winning jockeys of BOTH races were in their 50s.

After 54 year old Kevin Manning’s success on Poetic Flare in the 2000 Guineas on Saturday it was Frankie Dettori’s turn to prove age is just a number. The superstar rider, who turned 50 in December, won the race for a fourth time in his career on Mother Earth.

On the subject of statistics, it was also trainer Aidan O’Brien’s seventh success in the fillies’ Classic, helping his Ballydoyle operation get over the disappointment of failing to finish in the first four of the 2000 Guineas 24 hours earlier.

Dettori has now notched up an incredible 20 Classics during his career in the saddle and joked after the race that he still has “plenty of time” to beat the legendary Lester Piggott’s record of 30.

He said: “I was super excited to win that! I didn’t have the pressure to ride the favourite and had a very willing partner on a filly who I knew would give me everything.

“Aidan gave me a lot of confidence this morning and said to forget about Santa Barbara and just ride my own race. He told me to get cover and I did and like I said I forgot about the favourite and just kicked at the top of the hill.

“It’s great to do it at Newmarket. I’m extremely happy and I got lucky to get that ride. Lester was 56 so I’ve got six years left!”.

O’Brien was delighted with Mother Earth and said his beaten favourite, Santa Barbara, would head straight to The Cazoo Oaks next month at Epsom Downs.

Dettori cheered wildly in the winner’s enclosure and continued his celebrations into the Weighing Room and O’Brien added: “I didn’t ask Frankie anything afterwards - I just listened.

“I’m sure you could hear it all as well! It’s great to have him and he’s an unbelievable rider.”

George Boughey admitted the Cazoo Oaks at Epsom Downs next month might still be an option for Mystery Angel, after she gave him a first Listed success of his short training career by winning the Betfair Pretty Polly Stakes.

The Kodi Bear filly is not currently entered in the Classic but after producing a courageous performance over the 10 furlongs, the 29 year old trainer said supplementing her “might be something to have a go at”.

Boughey, who only began training in 2019 having previously been assistant to Hugo Palmer, said: “It was a shame not to win in France six weeks ago but she’s a top filly who obviously loves it here at Newmarket.

“She ran in three stakes races last year in October but her work had suggested that she was actually going to be better on faster ground, so she’s a filly with a pretty upward profile now and we’re very happy with her.

“She’s in the Prix Saint-Alary (at Longchamp) but the Musidora is obviously another option. She’s not in the Oaks, but she’s building a bit of prize money in the pot at the moment and it might be something we might have to have a go at. There are a few nice decisions to have to make.

“She’s not bred to stay a mile, never mind a mile and a quarter – she’s a Kodi Bear out of a Dark Angel mare – and you’d imagine that she’d be a six or seven furlong horse. But the way she won there she was galloping through the line.

“Ben said that 10 furlongs is probably her optimum at the moment but I certainly wouldn’t be against trying her over a mile and a half at some point.

“Our horses have been running very well and we’ve got more horses this year and a better quality of horse. My aim was to try and find a stakes horse this year and to actually convert that into a stakes winner is great. It’s going well and long may it continue.”

JARVIS HAILS HIS LADY AS “A VERY SPECIAL FILLY”

With a small stable, big race victories can be hard to come by. Hats off, then, to trainer William Jarvis who watched his Lady Bowthorpe land the Betfair Dahlia Stakes in decisive fashion before describing her as “a very special filly”.

It was her first victory at Group Two level and prompted Betfair to slash the five year old mare to 25-1 from 66-1 for the Al Shaqab Lockinge Stakes at Newbury in just under a fortnight (May 15th), with winning trainer Jarvis admitting he could be tempted by the Group One prize.

A 6-1 chance today, Lady Bowthorpe was settled at the rear of the seven runner nine furlong contest before beginning to make a forward move three furlongs from home under jockey Kieran Shoemark.

The daughter of Nathaniel progressed to take up the running just inside the final furlong and kept on to defy 2-1 favourite Queen Power by a head, with Lavender’s Blue another neck away in third.

Successful trainer Jarvis said: “She is a very special filly and I think as the year goes on she will hopefully continue to improve. She was in such good health and she was crying out for a run. I would have had to wait a fortnight maybe for the Middleton or the Lockinge and I felt this was the right place for her.

“She is just a bit tricky and she takes minding. She went away for the winter to Emma Banks’ (owner) family farm and they did a really good job with her. My head person and the girl that looks after her do a really special job. She takes some managing but that’s the nice thing - tricky women sometimes give you the most pleasure!

“She has got the Duke Of Cambridge entry and I didn’t put her in the Queen Anne as if we can keep her to her own sex it is in her favour. We will have a talk about the Lockinge. I would have thought we would have probably given it a swerve but if Palace Pier frightens enough away we may just take our chance. It’s a big thrill.

“We’ve not got a lot of horses so when you have a good one you have to make the most of it and we will endeavour to do that. Any winner is great but I was born and bred in Newmarket and I’ve lived here all my life and that makes it special. I think we can go 10 furlongs with her but I think eight to 10 is fine for her.”

If you like your finishes tight then just a nose and a short head covered the first three horses home in the mile and a half Back And Lay On Betfair Exchange.

It was Zabeel Champion who got up to prevail in the final strides for trainer Mark Johnston and jockey Ben Curtis, who timed his ride to perfection to hold off Godolphin’s 7-4 favourite Global Storm on the bob of a head.

Johnston said his winner, a Poet’s Voice colt, could now enter his calculations for Royal Ascot and added: “Jaber (Abdullah, owner) has sometimes not been too happy that we have been stepping him up to a mile and a half.

The victory was the first of a quick-fire double for Curtis, who celebrated victory 35 minutes later in the Betfair Pretty Polly Stakes on Mystery Angel.

Day two of the QIPCO Guineas Festvial had begun with the Better Odds On Betfair Exchange Handicap over 10 furlongs with top weight River Alwen getting up close home to take the honours.

It was Godolphin’s Western Symphony who looked to have the race in the bag in the final furlong but jockey Jamie Spencer timed his challenge to perfection aboard River Alwen to get up and score by a length. The three year old son of Dark Angel was returned at 5-1.

Prior to his win here, River Alwen had finished a respectable fourth behind leading Cazoo Derby contender Hurricane Lane at Newbury last month and was successful over a mile at Haydock Park last year.

Spencer said afterwards: “He did well - he benefited from Newbury. He was a bit fresh there and he was dropped 2lbs for that, so it was a winnable race.

“I think 10 furlongs will be his trip. He’ll get more adaptable to middle distances as he goes along but 10 is fine for the time being – he’s a Dark Angel so not too many of them will be getting much further than that.

“He will progress, he needed it at Newbury and that was only two weeks ago, so I’d expect him to improve again. You know what it’s like here, when the leader gets a jump on you it’s hard to make up ground.”