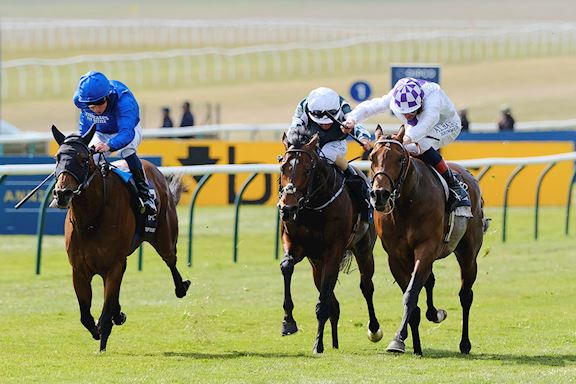 Newmarket’s QIPCO Guineas Festival is one of the most iconic days of sport in the British calendar.

Saturday saw some of the best three year old colts of their generation line up in the first Classic race of the season, the QIPCO 2000 Guineas. And there was a whole host of talent on display across the rest of the eight race card too.

GUINEAS WINNER IS POETRY IN MOTION FOR BOLGER

While most pundits were evaluating the chances of Irish horses trained by people with the surname O’Brien, it was another from across the water who was celebrating QIPCO 2000 Guineas glory at Newmarket.

Trainer Jim Bolger hailed the 16-1 success of Poetic Flare in the first Classic of the season as “right up there with the best” days he has enjoyed during his long career in racing.

Poetic Flare prevailed in the first Classic of the 2021 season by a short head from Master Of The Seas, with Lucky Vega another neck away in third.

It was also another landmark moment in the career of 54 year old jockey Kevin Manning, who became the oldest jockey to win the race (or any other Classic) since Lester Piggott won the 2000 Guineas on Rodrigo de Triano aged 56 in 1992.

Bolger bred, owns and trains the winner and the 79 year old, speaking from his County Carlow base, said: “I thought he was beaten! It’s a big day for us, right up there with the best we’ve had.

“He wasn’t ready for the Dewhurst last year. I thought he was a little bit fitter than he was and I was hoping he’d run a big race and get the experience of running at that level. He ran out of wind about a furlong and a half down but we were very pleased in the run and didn’t lose faith in him.

“It’s a wonderful day. In our case it’s fairly necessary with the way I do things! It very much carries on that Dawn Approach line, and I have two half-sisters of Poetic Flare as well.”

Winning jockey Manning added: “He caught me by surprise as he is a very switched off horse and does everything in his stride. He left the gates very quick and he caught me on a long rein.

“He wasn’t taking a great deal out of himself but he was lugging a bit right. We left the gates on the wrong note and it took as a furlong and a half to two furlongs to reorganise to get into a rhythm.

“He is very smart. He picked up well and travelled well. He just caught me off guard out of the gates and got me back on a long rein so I just had to sit and suffer. Down into the dip when they quickened up I thought it was put to bed then the last five or six strides towards the line I thought he was idling a little bit coming back underneath me.”

Sir Ron Priestley made every yard a winning one in the Group Two Betfair Exchange Jockey Club Stakes under Franny Norton.

The five year old Australia colt, trained by Mark Johnston and returned the 15-8 joint favourite, never really looked in any real danger of being caught and saw off the final furlong challenge of fellow 15-8 joint favourite Pyledriver to record a decisive two and a quarter length success. Thunderous was a further two lengths away in third.

This was the biggest success to date of Sir Ron Priestley’s career. He progressed through handicap company in 2019 and rounded off the campaign with a fine second in the final Classic, the Group One St Leger at Doncaster. Having missed all of 2020, he returned this season with success in the Listed Further Flight Stakes at Nottingham last month.

The Group Two Yorkshire Cup in just under a fortnight and the Group Two Hardwicke Stakes at Royal Ascot are likely to be next on the agenda.

Charlie Johnston, assistant to his father, said: “Obviously I think given what he did as a three year old and largely given who his brother is, we’ve spent most of the winter assuming he’s going to be a Cup horse this year and the Further Flight was certainly a stepping stone to the Yorkshire Cup and the Gold Cup at Royal Ascot.

“The way he travelled and picked up at Nottingham just made us think he could come here and this was a great opportunity to find out what we should be aiming for the rest of the year.

“He looks more than up to this sort of level – he’s not in the Coronation Cup which is a slight frustration now in hindsight – but I think Yorkshire Cup and Hardwicke is likely to be the next two places you’ll see him, I’d have thought.”

William Haggas admitted that next month’s Cazoo Derby is “a very tempting proposition” for Mohaafeth, as bookmakers slashed the colt to 10-1 for the Epsom Downs Classic following a second victory on the Rowley Mile in just 17 days.

Shadwell Estate’s three year old pulled clear of his three rivals in the closing stages of the 10 furlong Listed Betfair Newmarket Stakes to score by five lengths from 4-5 favourite Secret Protector. The son of Frankel is now 10-1 joint third favourite with Betfair for the Cazoo Derby.

Haggas said of his 2-1 winner: “That was quite good. He won well. If you look at the horse of Charlie’s, who clearly didn’t run his race, while it is all very exciting and very nice to see him win like that you have to wonder what the form is like. But he is improving and that is the most important thing.

“He is bred to be good and he has looked better each time he has run. We don’t know whether he would stay but The Derby is a very tempting proposition. He has won a trial and we won another trial at Sandown with another one who is different.

“What you need is a horse that is going forwards, not one that has done it at two, and he didn’t do anything at two. He is obviously getting his confidence. Once he pulled him out he went too early but that is because the horse took him there.

“Whether he stays we have never been sure but a mile and a quarter is definitely fine. But there is only one of them (The Derby) and why not? What else is there? Jim (Crowley, jockey) said is there time to run in the Dante but we haven’t as it was only 17 days ago that he last ran.

“I think the ground is quite important to him. I don’t think he wants soft ground as I think he is such a fluent mover. I think he loved that ground.

“It is all very exciting stuff. I’ve no idea if he would handle the track at Epsom as I’m not that clever, but he handles the dip at Newmarket okay. It is interesting.”

The four year old Dubawi gelding was winning over five furlongs at Group Three level for the second time in his career and afterwards was hailed by his trainer as “turning into a professional little sprinter”.

Lazuli, retuned the 3-1 favourite, overhauled leader Emaraaty Ana inside the final furlong and held off the fast finishing Came From The Dark to score by a neck. Emaraaty Ana was another neck away in third.

Appleby said: “He is a solid Group Three horse and if we placed him right there would be a Group Two in him as, at the end of the day, he has done that with a penalty, which I’ve been informed has never been done before.

“He is turning into a professional little sprinter. I like the way he walks around the paddock as he is nice and relaxed and when those gates open he turns the A game on.

“I’ve not got any plans for him to be brutally honest. I was fairly confident once we made the entry as we were toying with coming here or going to Haydock (for the Temple Stakes).”

CHIL CHIL PROVES TOO HOT TO HANDLE FOR RIVALS

Trainer Andrew Balding hailed Chil Chil’s “class” after she comfortably landed the the Betfair Exchange Handicap. The King Power Racing-owned five year old was the impressive three and a half lengths winner and a trip to Royal Ascot for  the Wokingham Handicap now beckons.

The daughter of Exceed And Excel stepped up on her seasonal debut when she was the neck runner-up in a similar handicap at last month’s bet365 Craven Meeting at Newmarket.

Today was her second course and distance success, following her 2019 victory in a fillies’ handicap and Balding said of the successful 11-4 joint favourite: “She’s a class filly, she just needs to relax. She needs fast ground and to relax in her races - she’s got a lot of style.

“We always had the Wokingham in mind for her and I think that’s where she’ll go for, but I’d hope that she can pick up some black type at some stage this year as well.”

Jockey Silvestre De Sousa added: “I was surprised at the way she quickened there. She likes to come off the pace and they just went an even gallop.

“She tracked the leaders quite nicely and when I pressed the button she did that well. She feels like one who can get black type at some point.”