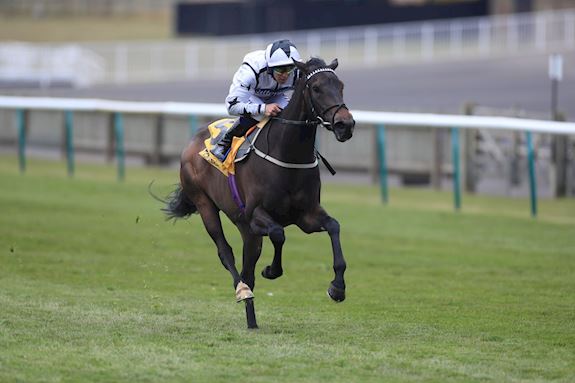 George Boughey admitted the Cazoo Oaks at Epsom Downs next month might still be an option for Mystery Angel, after she gave him a first Listed success of his short training career by winning the Betfair Pretty Polly Stakes.

The Kodi Bear filly is not currently entered in the Classic but after producing a courageous performance over the 10 furlongs, the 29 year old trainer said supplementing her “might be something to have a go at”.

Partnered by Ben Curtis, who was enjoying a 23-1 double on the card following his victory on Zabeel Champion in the previous race, Mystery Angel went to the front three furlongs from home.

Despite facing several challengers, the 13-2 chance just kept finding more and by the finish had a length and three quarters to spare over the staying on Sea Karats.

Boughey, who only began training in 2019 having previously been assistant to Hugo Palmer, said: “It was a shame not to win in France six weeks ago but she’s a top filly who obviously loves it here at Newmarket.

“I actually worked her about a week ago on the summer gallop on the other side of the racecourse and she worked very well on what was very fast ground – with no water for a month on it – so she’s an improving filly and I always said last year that she handled the soft and heavy ground.

“She ran in three stakes races last year in October but her work had suggested that she was actually going to be better on faster ground, so she’s a filly with a pretty upward profile now and we’re very happy with her.

“She’s in the Prix Saint-Alary (at Longchamp) but the Musidora is obviously another option. She’s not in the Oaks, but she’s building a bit of prize money in the pot at the moment and it might be something we might have to have a go at. There are a few nice decisions to have to make.

“She’s not bred to stay a mile, never mind a mile and a quarter – she’s a Kodi Bear out of a Dark Angel mare – and you’d imagine that she’d be a six or seven furlong horse. But the way she won there she was galloping through the line.

“Ben said that 10 furlongs is probably her optimum at the moment but I certainly wouldn’t be against trying her over a mile and a half at some point.

“Our horses have been running very well and we’ve got more horses this year and a better quality of horse. My aim was to try and find a stakes horse this year and to actually convert that into a stakes winner is great. It’s going well and long may it continue.”

Jockey Ben Curtis added: “She’s done all of her racing on soft or heavy ground and that was her first real test on a quicker surface. She travelled like a dream on it and when I asked her to go and win her race she put it to bed in four strides, so I’m very happy with her.

“I see no reason why she wouldn’t get a bit further, she’s a strong traveller and saw that trip out well.”

William Haggas, trainer of runner-up Sea Karats, said: “She is still learning and is not there yet. She got a little bit lost in the dip. She is fine but whether she is good enough is a different thing. I like her a lot but she was not wise enough today. The winner has got bags of experience and she got the run of the race.

“We will see what we do now going forward. She definitely wants further and she will be going over a mile and a half next time. Tom (Marquand, jockey) said she was quite happy on that ground as she is a fluent mover.”

Thady Gosden, who trains third home Taslima alongside his father John, said: “We were very pleased with her and she ended up staying on well. She has now been placed in a Listed race which is important to her.