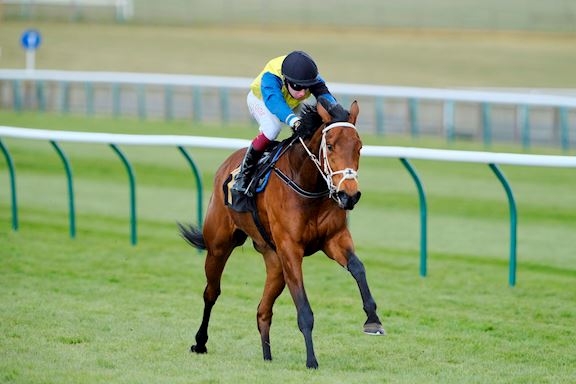 Ed Dunlop hopes John Leeper can keep his dreams of appearing in next month’s Cazoo Derby at Epsom Downs alive by taking a step up in class in his stride in the Betway Fairway Stakes at Newmarket tomorrow (Saturday May 15th).

The impeccably bred colt, who is by Frankel and out of Dunlop’s 2010 Oaks heroine Snow Fairy, will bid to enhance his big reputation when tackling five rivals in the mile and a quarter Listed prize.

John Leeper, named after Dunlop’s late father and 10-times Classic-winning trainer, built on an encouraging fourth at Doncaster on his sole start at two when running out an impressive winner on his return to action under Hollie Doyle at Newcastle last month.

Dunlop said: “The Dante looked a very strong race on paper and he had the option of going to Newmarket instead. We didn’t want firm ground at Newmarket but with the rain we have had that is not going to be the case, so we discussed it and decided to come here.

“He won a novice at Newcastle very impressively from a difficult draw but we are under no illusions he still has a long way to go yet. He was an immature horse last year and he only had the one run but we hoped that he would improve from two to three.

“He won his novice over a mile and a quarter and I’m sure he will stay further. William Buick rode him first time out and he knows the horse. Hopefully we will learn a lot more on Saturday.”

Richard Hannon believes Group Three Chester Vase third Fancy Man has an “excellent chance” of defying a penalty picked up for winning last year’s Listed Ascendant Stakes at Haydock Park, provided he handles the Rowley Mile better than he did on his seasonal return when fifth in the Listed Feilden Stakes last month.

He said: “Though he carries a Listed penalty for his win at Haydock last year hopefully he can win at this level again.

“The plan will be to hang on to him a bit this time to give him every chance of getting the trip. He is a big strong boy and I’ve been very happy with him at home. He loves a bit of juice in the ground so he has a lot going for him.

“The track was a worry before as he didn’t come down the hill but the ground was quick and he should handle it better this time. He should have an excellent chance if he runs to his rating.”

Connections of the Mark Johnston-trained Sea The Shells admit they are on a “fact finding mission” with the son of Sea The Stars after he surrendered his unbeaten record on his turf debut at Sandown Park last time out.

Charlie Johnston, son and assistant trainer, said: “We have no idea what happened at Sandown and nothing concrete has come to light. It was too bad to be true.

“It is not the normal route getting stuffed in a handicap to then go into a Listed race but options off his mark were limited. This was a nice opportunity to run on a nice track on decent ground in a small field.

“He was very impressive early in his first two starts but then last time was a reality check. We are on a fact finding mission on Saturday and hopefully we can get back on track.”

Jane Chapple-Hyam reports Bellosa to be in good order ahead of putting her unbeaten record on the line in the Listed Betway King Charles II Stakes over seven furlongs.

The three year old Awtaad filly created a striking impression over course and distance last month when bolting up by seven lengths on her debut under dual champion jockey Oisin Murphy in the famous silks of her owner-breeder Sir Edmund Loder.

Chapple-Hyam said: “Bellosa has trained well since her win last time and I’m very pleased with her. I can’t see the rain we have being a problem as she goes on any ground in training.

“I don’t think she will get an easy lead like last time as it will be more competitive, but she doesn’t have to lead as she is a very relaxed filly.

“We thought she would go well last time but she just kept finding when she hit the rising ground and didn’t come back to them. Oisin said we could come back in trip with her but I was happy to stay at seven. This is a learning curve for us - it will tell us what she is capable off.”

Ralph Beckett is counting on the application of a set of blinkers having the desired effect on Devilwala, who was last sighted finishing down the field in the QIPCO 2000 Guineas on May 1st.

Beckett said: “The drop back to seven furlongs will suit him as well as the cut in the ground and the headgear. He races quite lazily and we feel now is the time to pull the trigger on using the blinkers.

“He simply didn’t stay in the Guineas and the ground was too quick. He has trained well in the blinkers and he has been moving well at home since the Guineas.”

Richard Hannon expects Thank You Next, who finished second over course and distance in last year’s Group Three Oh Sharp Stakes, to appreciate dropping back in trip having failed to stay a mile at Ascot last Saturday.

Hannon said: “She didn’t get the mile at Ascot last Saturday so we are coming back in trip with her. Seven furlongs suits her and she ran well last time she was here. She just needed both her first two starts on the all-weather before her run at Ascot.”

Cloudbridge signed off last year finishing second in the Group Three Sirenia Stakes over six furlongs at Kempton Park and his trainer Charlie Appleby feels the son of Hard Spun has plenty in his favour on his first start since being gelded.

Appleby said: “I’ve been delighted with Cloudbridge’s preparations. We have gelded him and I think both the return to turf and stepping back up to seven will suit him again.

“If he brings the best of his juvenile form to hand he will be very competitive.”

“In the Betway Fairway it’ll be exciting to see the regally bred John Leeper again and he’s one I know we’ll want to keep on our side, as is Tasman Bay, for Sir Mark Todd.

“In the Betway King Charles II Stakes, we’re keen to see how Bellosa will run. I think everyone in Newmarket must have seen her work with the way she was backed on her debut and she duly routed her opposition that day! I think we could be looking at a Group horse in the making and she’s another we’ll want to keep on our side!”