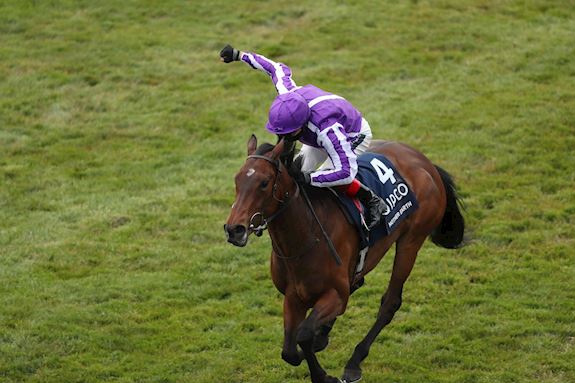 Frankie Dettori celebrated winning the 20th Classic of his career with victory on Mother Earth in the QIPCO 1000 Guineas – then joked he has “plenty of time” to beat the legendary Lester Piggott’s record of 30.

It was a fourth victory in the race for the 50 year old Italian jockey and a seventh for trainer Aidan O’Brien.

Taking the lead just inside the final quarter mile, Zoffany filly Mother Earth, a 10-1 chance, kept on finding more and at the finish had a length to spare over the staying on Saffron Beach (9-1). A futher neck back in third was 22-1 chance Fev Rover.

Victory for Dettori came just 24 hours after 54 year old Kevin Manning won the QIPCO 2000 Guineas on Poetic Flare, a fact not lost on the jockey.

Speaking after the race Dettori said: “I was super excited to win that! I didn’t have the pressure to ride the favourite and had a very willing partner on a filly who I knew would give me everything.

“Aidan gave me a lot of confidence this morning and said to forget about Santa Barbara and just ride my own race. He told me to get cover and I did and like I said I forgot about the favourite and just kicked at the top of the hill.

“It’s great to do it at Newmarket. I’m extremely happy and I got lucky to get that ride. Lester was 56 so I’ve got six years left and Kevin won yesterday - come on the oldies!”

Before the QIPCO 1000 Guineas, many had expected an O’Brien victory in the race to come via his 5-2 joint favourite Santa Barbara, who finished fourth under Ryan Moore.

But O’Brien said of Mother Earth: “She’s a very good filly and always was. It was unfair to the favourite (Santa Barbara) to come but we had to come with the view to coming back over here for the Oaks.

“Santa Barbara is only a baby and Ryan said that he’d liked to have waited longer but he saw Frankie coming down his outside and he had to come then and she was just green in the dip, but after having one easy run it was a great run.

“Mother Earth is a very consistent filly - she had a great run in America last time out last year and that was very professional. She relaxed and quickened and did everything really well, so we’re delighted. I think Mother Earth will stick to a mile and we’ll step Santa Barbara up in trip – the latter was always going to go to the Oaks next time and this filly was always going to go to the Irish Guineas next. That was the plan.

“We won’t go again with Santa Barbara (before the Cazoo Oaks). We felt that she would learn as much coming here as she would for three runs, but it was a risk doing it that she was going to get beaten.

“She’ll be fine, she’s classy and she would have learnt a lot today and she has plenty time to get over that. Ryan was very happy and he said to me that in an ideal world he didn’t want to commit as early.

“But with Frankie coming he had to keep going then and she was a little bit unbalanced going into the dip, which is understandable as we’ve never taken her off the bridle at home. Hopefully she’ll come out of it ok and it will do her good.

“I didn’t ask Frankie anything afterwards - I just listened. I’m sure you could hear it all as well! It’s great to have him and he’s an unbelievable rider.”

Jane Chapple-Hyam, trainer of runner-up Saffron Beach, added: “What can I say? Aidan O’Brien is just a genius. He is hard to take on and I can’t wait for him to retire!

“It would have been the quickest ground she has been on but she can handle it as she is versatile as you saw in the Oh So Sharp on good to soft and she has done it here on the quicker ground. We are just all thrilled and I’m sure the owners are highly delighted as they have got a second in the 1000 Guineas.

“This time last year she wasn’t even in training. She has seen the mile out 100 per cent. I knew she would get the mile and I know she will get a mile and a quarter as well.

“They (owners Ben and Ollie Sangster and James Wigan) will tell me where to send her and I will just get her fit. There is a good one in her. We just have to place her properly now and we will see what the team wants to do.”

Richard Fahey, trainer of the third Fev Rover, said: “I was pleased enough but Paul (Hanagan, jockey) just felt the ground was quick enough but she is grand. I was just worried there would be no pace on which I was right so I put the cheekpieces on but I’m not saying she will always have them on.

“She is in the Irish 1000 Guineas so we will have a look at that but we will step her up at some stage. It was a big run but visually they didn’t seem go that quick and instead just went an even gallop.

“ For a filly that will step up that mile on quick ground was sharp enough but I’m delighted. She is a smart filly and I love her to bits. She is a big filly and hopefully she will come forward. I’m sure she will pop up in a big one at some point.”

Jockey Paul Hanagan added: “She really tried and I think she will improve a lot for that run as it was her first run back. I couldn’t be more pleased. I think first time back at the racecourse a big open track like this I thought the cheekpieces would just help her.”

Tom Marquand, rider of Sacred (seventh), said: “The race developed and fell like I thought it would but she was just a bit keen and when we hit that rising ground we had burned up any reserves for that final furlong.

“She has got a beautiful cruising speed and they just weren’t taking her along quite quick enough to be in that sort of natural comfort zone of hers. They were just going that stride slower.

“I think everyone was unsure of the trip as she hadn’t tried it before. It depends what races and targets connections have now. Ultimately she is a really nice filly and she will be mixing it with the best of them.”

Oisin Murphy, who was aboard 5-2 joint favourite Alcohol Free (fifth), said: “She had a nice trip and she followed Billy Lee on Thunder Beauty and Adam Kirby on Saffron Beach and I thought she had every chance.

“It was a good race and well done to the winner. It wasn’t that she didn’t stay. They all finished in a line the first five. Take nothing away from her performance.”