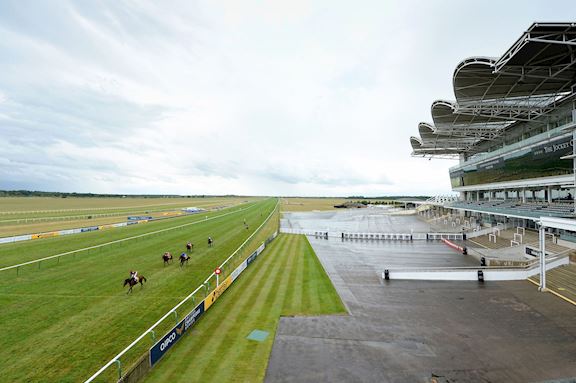 Robert Cowell has been busy training for his pilot’s license recently, but it was Arecibo who put on the afterburners to set up a trip to Royal Ascot after leading home a one, two, three, four for the trainer at Newmarket on Saturday (22nd May).

The Six Mile Bottom handler has his sights set on an outing at the Royal meeting in the Group One King’s Stand Stakes, which he claimed in 2011 with Prohibit and 2015 with Goldream, with the six year old following his victory in the WSG Sports Signage Handicap.

After meeting trouble in running in the Group Three Betfair Palace House Stakes over course and distance last time out, the 85-40 shot proved a class above his rivals in the five furlong event when defeating Ishvara by two and a quarter lengths and initiating a 10.7/1 double for Frankie Dettori.

Cowell said: “These are four nice horses but there are not the races around for them. He ran in the Palace House last time and was unlucky - he would have been on the premises with a clear run.

“He is a lovely horse and he may even go to the King’s Stand now. Frankie said he is all speed and Ascot would suit him down to the ground. I think he is quite good. This ground is ideal but he has form on faster ground.”

On his pilot training he added: “I’m close to having my private pilot test. I’ve done about 70 hours and I’ve been solo quite a few times. Lockdown was a bit of a pain but we are up and running and I’m hoping to get my test done by the summer.”

The John and Thady Gosden-trained Meritorious appeared to appreciate the step up to a mile and a half when completing Dettori’s brace after giving weight away all round with a tenacious length and a quarter success in the Christine Saunders Memorial Handicap.

John Gosden said of the 11-4 winner: “He enjoyed the mile and a half as he had been getting caught out over a mile and a quarter. It is nice to win here at Newmarket. He handles most ground including with a bit of cut in it.”

Trainer George Boughey and jockey Nicola Currie matched Dettori’s effort when teaming up to claim a 23.5-1 double kick started by Air To Air (5-2 joint-favourite), who could be bound for the Royal meeting after taking the seven-furlong WSG Supporting Racing Novices Stakes by a length and a quarter.

The Newmarket handler said: “He has always been a lovely horse but we have not quite got it right with him and he should have won a couple of times before. He is finally getting his act together.

“I do think if he got in the Britannia where they go a proper gallop it would suit him better.”

Jean Baptiste (6-1) put a string of near misses behind him when completing Boughey’s and Currie’s brace after proving a length and a quarter too strong for last year’s Cambridgeshire runner-up Lucander in the WSG Family Business Handicap over 10 furlongs.

Boughey said: “The first time cheekpieces have probably helped him. We had a change of tactics today and I said really roll him along and that has suited him well.

“Kevin Bailey, who owns him, owned Yellowstone where I was based for Hugo Palmer so it is great to have a winner for him.”

Richard Hughes celebrated his first two year old winner of the season following the debut success of Bethersden Boy who sprung a 25-1 surprise when running out a length and a quarter winner of the Wingate Signs British EBF Novice Stakes.

The Lambourn handler said: “I didn’t know what to expect as we ran one other two year old colt and he missed the kick and finished last so it was hard to get a guide.

“He does want seven but we need to get these horses going so we have run him over six today. He will improve going up in trip.”

Victory was also a first in his own name for Chris Dickens, who jointly owns the son of Excelebration with Robbie Rexton.

He said: “It’s unbelievable. I’ve been involved in syndicates before but there is just the two of us in this one. I’ve travelled up from Kent from a village called Bethersden which is where his name comes from. My family are all here and I’m not sure this will be topped.”

Joe Fanning is a hard jockey to pass when allowed to dictate matters as he demonstrated when guiding Torcello (12-1) to glory by a length and three quarters in the Dawn Saunders Birthday Celebration Handicap over a mile and a half.

Shaun Lycett, winning trainer, said: “I’ve travelled all over Britain looking for soft ground. He wants soft ground and it is the first time he had it since he was second at Newbury last year.

“He is no mug given the right conditions. He just needs soft ground and luckily these storms came good for him. That is now four winners from my last five runners.”