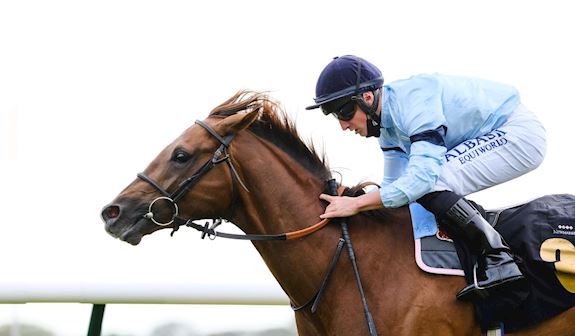 The only two year old race of the QIPCO Guineas Festival, the Betfair British EBF Maiden Stakes over five furlongs, went to Dig Two, trained by Hugo Palmer and ridden by James Doyle.

The Cotai Glory colt, a 17-2 chance, was always towards the head of affairs and after taking up the running just inside the final furlong, ran on in eye-catchng fashion to win by two and three quarter lengths from 11-8 favorutie Secret Strength.

Jockey Doyle said: “We were disappointed on debut as he had worked sensibly before Windsor and it was just a non-event as he missed the break. We were always playing catch-up and never really found his feet.

“He bounced forward for that run and broke on terms today. The leader went off pretty strong but he has travelled nicely and shown plenty of speed and went through the dip very easily and quickened up when he met the rising ground. He has finished strongly. I’m very pleased with him and I’m sure he will take a good step forward again.

“I’m not sure what Hugo’s plan is with him. Beforehand it didn’t look the strongest of events but the time was good and he showed a willing attitude.”

Parachute showed a very willing attitude to win the mile and a half Betfair Weighed In Podcast Handicap. The three year old Sea The Stars colt, returned at 3-1, looked sure to be reeled in by 4-6 favourite Echo Point but kept finding more to score by two and a quarter lengths for trainer Ed Walker and jockey Tom Marquand.

A trip to Royal Ascot for the King George V Handicap is now on the agenda for Parachute, who races in the familiar silks of Highclere Thoroughbred Racing.

Ed Walker said: “He is a funny horse as he doesn’t do a stroke at home . I’ve been saying, tongue in cheek, to the owners that he reminds me of English King who was a lazy workhorse that perks up on the track and this guy seems the same.

“It was a badly run race at Redcar. Danny (Tudhope) did nothing wrong as I asked him to take a lead. I didn’t think he would concentrate enough from the front like he did today. Danny sat and got a lead but they crawled and he couldn’t get out and get his stamina into play. The step up in trip has helped him today and Tom has given him a peach.

“I’d love to go for the King George V Stakes at Royal Ascot as I think that would be perfect for him. I don’t know whether we would go again or just freshen him up for Ascot. He is a progressive horse that has very solid form.”

The 2021 QIPCO Guineas Festival came to a close with the seven furlong Betfair Racing Only Bettor Podcast Confined Handicap, a contest restricted to three year olds who had not won more than one race.

It was Shadwell Estate Company’s Tawleed who ran out the comfortable winner, scoring by a length and a half under Jim Crowley.

John Gosden, who trains the Exceed And Excel gedling along with his son Thady, said of the 4-1 winner: “They’ve all run well today but I’ve had a lot of outsiders.

“I’m happy with him and the blinkers have helped him. He needs blinkers and the turf. I think we will stick at seven with him."