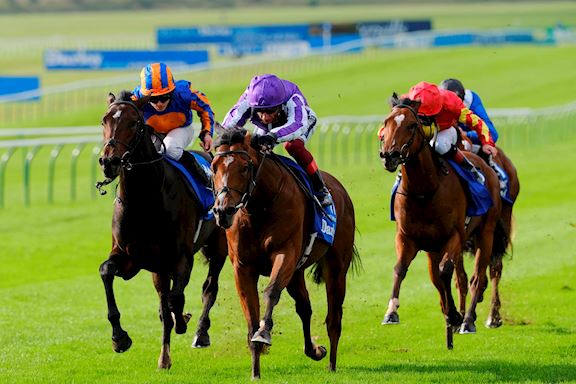 It is now just under two months until the first Classic of the 2021 Flat season takes place – the QIPCO 2000 Guineas, staged on the Rowley Mile at Newmarket on Saturday 1st May.

There are 72 entries for the mile contest, which will be run for the 213th time this year and forms part of the QIPCO British Champions Series.

Master of Ballydoyle Aidan O’Brien has saddled a record 10 QIPCO 2000 Guineas winners and accounts for 12 entries this year, headed by St Mark's Basilica, winner of the Group One Darley Dewhurst Stakes on the Rowley Mile in 2020 and Battleground, impressive when taking the Group Two Vintage Stakes before finishing second in the Grade One Breeders’ Cup Juvenile Turf.

Trainers Joseph O’Brien, Andrew Balding and Richard Hannon gave updates on their contenders as the entries were revealed today.

“Thunder Moon has wintered well and we are pleased with where we are. There is plenty of water still to go under the bridge yet but it is exciting to have a live contender for the 2000 Guineas. We were very pleased with the run in the Dewhurst considering the ground on the day. He was posted on a tougher part of the track as there was bias towards the stands rails but we were pleased with him. He is obviously a pretty quick horse on what he has done so far but he shapes as though a mile will be within compass so I don’t see the trip being a problem. I do feel that he will be better on quicker ground as well. It is nice to have had a run at the track previously and that experience there won’t do him no harm. We have the option of running him beforehand but we will decide nearer the time and see how the horse is before making that decision.”

Successful in a seven-furlong maiden on the July Course, he subsequently came home third to Battleground in the Vintage Stakes

“He had a setback after the Vintage at Goodwood that is why we didn’t see him for the rest of the year. We are just about to increase the speed of his work. He would be a possibility for the 2000 Guineas.”

He said: “I’m very pleased with him and he has done very well. He did just a bit more than a canter a few days ago, him Fancy Man and Etonian all worked and it was a lovely start. Regarding his Newmarket run, the times say that the ground was heavy and it looked it. Chindit will go wherever there is decent ground. If it turns up at Newbury that is where he will go first (Greenham). He had done all his winning on flat tracks at Doncaster and Ascot before Newmarket and I’m not sure he loved the track. He has always been a neat horse with a good action. He is a good horse with a lot of speed. I think he would get the mile in a Guineas and would be suited by that trip as he is a very straightforward, simple horse.”

Belloccio (FR) 3 9 0 All for One Racing David Menuisier