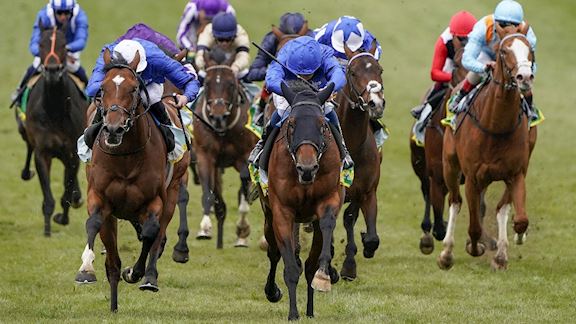 Traditionally the bet365 Craven Stakes helps us find some contenders for the QIPCO 2000 Guineas, staged back on Newmarket’s Rowley Mile little over a fortnight later. This year’s race proved as competitive as they come and there’s every chance we saw the future winner of the first Classic of the season in Master Of The Seas.

Day three of the bet365 Craven Meeting is also the last fixture at the track before the QIPCO Guineas Festival begins on May 1st. We sent Graham Clark to speak to the winners…

It was plain sailing for Charlie Appleby’s Master Of The Seas as Godolphin celebrated a one-two in the bet365 Craven Stakes.

Not since 2004 has the winner of this race gone on to land the QIPCO 2000 Guineas, but Newmarket trainer Appleby will be hoping his smart colt can repeat the feat of Haafhd 17 years ago.

Having watched last year’s Autumn Stakes hero One Ruler impress in a racecourse gallop at Newmarket’s Rowley Mile 24 hours earlier, Appleby described Master Of The Seas as “a class act” following his victory in the Group 3 feature race.

The talented Dubawi colt was putting a disappointing run in the Meydan Classic in February behind him and after the race Betfair cut his price from 20-1 into 12-1 to win the QIPCO 2000 Guineas on May 1st.

Appleby said: “He was the class act in the race. As I’ve always said I was never disappointed with the run in Meydan as our eye was firmly on a European campaign.

“Physically I’ve felt he has done very well since that run. William had to go through the gears a little bit there. He had to find the racing room and he found that and as William said I had to ask him the question going into the dip and that can be hard for the horses but he is a very well balanced horse.

“He flew through the dip and he said once he hit the rising ground he picked up well and went through the line strong. It was a pleasing effort by the pair of them.

“That hood was going to be key today. We will look to keep it on in the Guineas. The key question today was to get him doing it the right way round - as you saw in the National Stakes and at Meydan he was doing too much to finish his races off in the correct manner. It is a nice position to have two or three nice colts to look at the Guineas.”

Summerghand continued to defy his advancing years to secure the first Group race success of his career in the bet365 Abernant Stakes.

The win was the David O’Meara-trained Summerghand’s first on the Rowley Mile from four attempts, having finished second on his other three appearances at the track.

Victory had looked to be heading the way of last year’s winner, Oxted, but he was to be denied back-to-back victories by the 7-1 chance, who was making his sixth start of the year.

Bruce Raymond, racing manager to owner Hamad Rashed Bin Ghedayer, said: “He has been beautifully trained and you can’t do much at home with him, I’m sure. He just needs a fast gallop and something to aim that.

“I think the horse has suddenly come into form. He has been a little bit unlucky several times as when you get a big handicap you have got to get to get a run. Here he looked to be trapped on the fence at one time but from half way they are kicking on so he was able to get plenty of room and he finished well.”

As for Oxted, Roger Teal might be minded to drop back to five furlongs for the King’s Stand Stakes at Royal Ascot.

He admitted: “I’m gutted we didn’t win but we can get him back. Every horse gets beat, they are sprinters and you need everything to go right on the day. On ratings he should have been two or three lengths clear. He didn’t hit the hill like he did last year. We are not panicking.”

Few horses will win quite as impressively at Newmarket’s Rowley Mile this Spring than Jane Chapple-Hyam’s Bellosa, who produced an eye-catching debut success in the Rossdales Maiden Fillies’ Stakes.

Despite being one of two newcomers in the seven furlong contest, the daughter of Awtaad proved a cut above her rivals, showing a professional attitude throughout.

Having made a sharp exit from the stalls the 7-2 joint favourite continued to pour on the pressure from the front in the hands of dual champion jockey Oisin Murphy, before crossing the line seven lengths clear of runner-up Verreaux Eagle.

Chapple-Hyam said: “She is a nice filly. She came to me after Christmas. She just keeps improving with all her work. I was thrilled to see her do it how she did today. I knew she was good enough to hit the line. She was taking on horses that had run before but she just showed her class.”

Assessing future plans Chapple-Hyam has earmarked a step up to at least Listed level for Bellosa on her next start along with the possibility of a drop back in trip.

She added: “I know there is a Listed race at Nottingham (Kilvington Fillies’ Stakes) and a Group Three at Lingfield (Chartwell Stakes). We will just have a look and we are lucky to have two nice fillies in the yard.”

Charlie Appleby will consider returning Creative Force to Group race company after he defied a 299 day absence to take the Each Way Extra At bet365 Handicap.

The gelded son of Dubawi made the most of a significant drop in class in the six furlong contest to make his first start since finishing down the field in last year’s Group Two Coventry Stakes at Royal Ascot a triumphant one.

Making up plenty of ground late on, the 11-4 favourite reeled in long-time leader Significantly during the closing strides before pulling away to score by a length and three quarters.

Appleby said: “He is a very genuine little horse as you saw today. He broke his maiden tag here last year. He is a horse that has done well through the winter. He has not grown but he is a strong individual.

“He could get seven (furlongs) as well, which might open up a few options for him. He is entitled to come forward a bit as well. I’m pleased and it was a good performance. Whether he is quite good enough for something like a Pavilion Stakes I’m not sure.”

Peter The Great upstaged a number of better fancied rivals to hit the target at the first time of asking in the bet365 Wood Ditton Maiden Stakes.

The New Approach colt, who was one of two runners in the one mile contest for trainer John Gosden alongside Ironside, stayed on well to make the perfect first impression.

Picking up well during the closing stages under Nicky Mackay, the 11-1 chance stayed on strongly all the way to the line to defeat Southern Voyage by a length.

And Gosden said: “Never in the Wood Ditton is it a surprise. He has worked fine at home and we have been happy with him. He has a wild side to him and Nicky who rides him at home can ride him and we will leave the veteran in the weighing room.

“We will go for a mile and a quarter novice now - that’s the great thing now you have somewhere to go as if you won this race in the past you were in big trouble as you had to go for a Listed or conditions race.

“With them racing during the winter you don’t get a field of 20 roaring bulls that we used to have that had never raced in their life.”