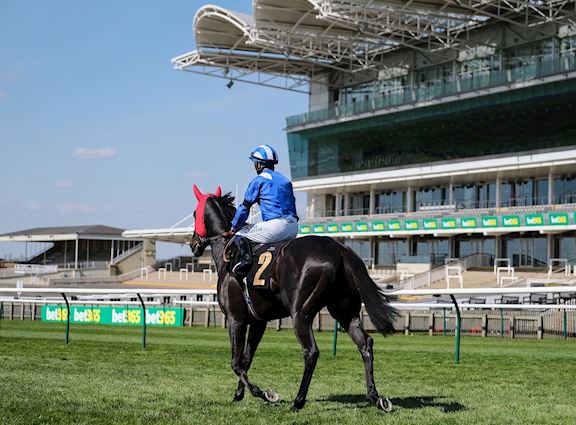 Frankie Dettori is confident Global Giant can make his first ride in Britain this year a winning one by striking gold in the bet365 Earl Of Sefton Stakes at Newmarket today, Wednesday 14th April, day two of the bet365 Craven Meeting.

The popular Italian jockey, who turned 50 in December, will take to the track in Britain for the first time in 2021 aboard the John and Thady Gosden-trained six year old in the Group Three prize.

Having failed to handle the dirt in the Saudi Cup at Riyadh on his penultimate outing the son of Shamardal, who is one of two runners in the mile one contest for the Gosden’s alongside Forest Of Dean, proved a cut above his rivals in a Listed contest at Kempton last month.

Dettori said: “I’m looking forward to riding back in Britain and getting back on Global Giant who is owned by a good friend of mine Sheikh Isa.

“We had a crack at the Bahrain International where we came second after missing the gate then he didn’t take to the dirt well in the Saudi Cup.

“He won really well with Rab Havlin in a Listed race at Kempton last time. This looks a good spot for him and nine furlongs should be ideal. Everyone is happy with him at home.

“He has a favourite’s chance. It is a good ride to have as my first ride back in Britain this year.”

Although Global Giant, who will face five opponents, will be Dettori’s first domestic ride of the year the three-times champion jockey has been busy racing abroad over the past few months and admits his body feels as strong as ever.

He added: “I’ve had a great winter despite the Covid pandemic.

“I was able to ride in Dubai and I had a good carnival out there with Saeed Bin Suroor along with riding a Group One winner for John (Gosden) on Lord North in the Dubai Turf.

“I’ve also had a couple of trips to Bahrain and Saudi Arabia.

“I’ve really been enjoying things and I’m really looking forward to seeing people back at the races here.

“Fifty is a big number and it does scare me a bit sometimes but the body feels good at the moment thank God and I’m enjoying my racing.”

Jane Chapple-Hyam reports Saffron Beach to look “fantastic” ahead of putting her unbeaten record on the line when testing her QIPCO 1000 Guineas credentials against nine rivals in the Group Three Lanwades Stud Nell Gwyn Stakes.

The daughter of New Bay backed up her debut victory over seven furlongs at the Rowley Mile in September when following up over course and distance in the Group Three Oh So Sharp Stakes in October.

Chapple-Hyam said: “I feel that Saffron Beach has wintered well and she is training well. She looks fantastic in her coat.

“Adam Kirby has ridden her a few times at home and he is looking forward to riding her. He knows the filly well as he is two from two on her, while you can’t beat that track experience she has.

“The Oh So Sharp was on soft ground and Adam was worried about me running her on that as he has got the ground that he has wanted for her as she has the action for it.

“She has had no hiccups with her build up and we have taken her over to the watered gallop two weeks ago to test her. She has developed into a three-year-old and what she did at two was a bonus.”

The Roger Charlton-trained Love Is You is another defending an unbeaten record in the seven-furlong event having followed up her winning debut at Ascot with victory in a Listed prize at Newbury and her jockey Jason Watson is confident of another big performance.

Watson said: “Love Is You is exciting. She has wintered well and looks great. Steve Raymont who rides her out every day has been very happy with her. I’ve not sat on her but I’ve confidence in the team and what they think and I think she should run well.

“Though she has won at Ascot and Newbury which are pretty level tracks I don’t think the track will be an issue as she is quite well balanced.

“She won on heavy ground at the end of the season but I don’t think she necessarily needs that ground and I think good ground is what she wants.

“Stamina will be no issue while she looks stronger this year and that seems to have increased her speed a bit.”

Star Of Emaraaty, who is one of two runners for the Gosden team alongside Tawahub, will look to make a winning stable debut by scoring for the first time since springing a 66-1 surprise on the July Course in the Group Three Sweet Solera Stakes.

Dettori added: “Star Of Emaraaty was purchased by Teruya Yoshida who kindly placed her with John.

“It will be interesting to see where we are with her as the winter can change a lot of things but she is already a Group Three winner and I’m looking forward to seeing what we find out.”

The Listed bet365 European Free Handicap has attracted a field over seven including the Simon and Ed Crisford trained Legal Attack, who is expected to benefit from the step up to seven furlongs along with returning to a sounder surface

Ed Crisford said: “Legal Attack definitely showed he wants quicker ground when he ran at York as Adam (Kirby) said he got stuck in the mud and he is a nice moving horse. We think the step up to seven furlongs should suit as he was crying out for it at the end of last year.

“It looks a tough enough spot to start him off but he has been doing nicely. Hopefully, this can be a nice stepping stone for him for some good summer targets.”

Eve Johnson Houghton expects Percy’s Lad, who tasted defeat for the first time on his final start last season in Group Three at Newbury, to take a step forward from whatever he does.

She said: “A few of mine appear to be needing the run and we have had some disappointing results but he deserves to be there and he did nothing wrong last season.

“It was too soft for him at Newbury and we know he stays a mile and that is probably what he wants. I know we are dropping back to seven but it is working well, and I’m happy as I can be.”