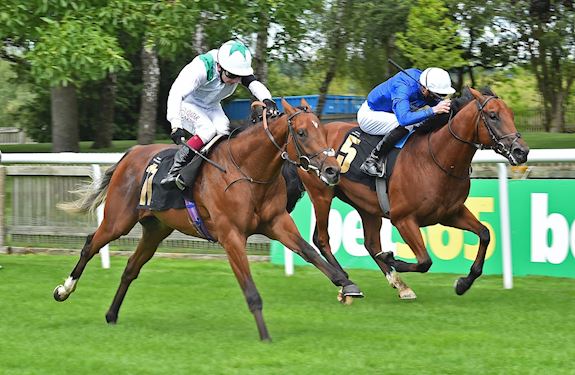 Racing returns to Newmarket tomorrow with day one of the bet365 Craven Meeting on the Rowley Mile.

Taking centre stage is the Listed bet365 Feilden Stakes over nine furlongs which often provides some valuable pointers to the future, most significantly in recent years when it went to Golden Horn in 2015. The Anthony Oppenheimer-owned colt, who was trained by John Gosden, went on enjoy a fabulous campaign with victories in the Derby, Coral-Eclipse, Irish Champion Stakes and Prix de l’Arc de Triomphe.

The field of nine for tomorrow’s contest includes a pair from Godolphin trainer Charlie Appleby – Secret Protector (William Buick) and Highland Avenue (James Doyle). Both already have made their mark in 2021 with Secret Protector easing to a comfortable victory in an extended nine furlong conditions race at Meydan, UAE and Highland Avenue, a Dubawi colt out of 2015 Cheveley Park Stakes heroine Lumiere, rattling off two wins on the Polytrack at Kempton Park, most recently in the 'Road To The Kentucky Derby' Conditions Stakes on 3rd March.

Youth Spirit has been not been seen out since finishing third in the Group Two Vintage Stakes at Glorious Goodwood in late July, having previously won a seven-furlong maiden on Newmarket’s July Course earlier in the same month.

Trainer Andrew Balding reports the son of Camelot to be in good order for his return to action tomorrow when he will be partnered by Oisin Murphy.

Balding said: “I am very happy with Youth Spirit and have been pleased with how he has been working so far this spring.

“He will come for the run tomorrow but I am looking forward to getting him going again.

“He showed a very decent level of form last year and he is an exciting horse for this year.”

Roger Varian is represented by Royal Champion, who was the impressive winner of his only start in 2020 when landing a mile maiden on the Rowley Mile. Ireland’s champion trainer Aidan O’Brien sends over Arturo Toscanini, who similarly won on his sole start last year when taking a Curragh maiden in November.

Fancy Man also held an entry in Thursday’s Group Three bet365 Craven Stakes but trainer Richard Hannon has opted for tomorrow’s contest instead. The son of Pride Of Dubai landed two of his three starts last year, rounding off the campaign with a Listed victory in the Betfair Exchange Ascendant Stakes at Haydock Park.

Gentleman Joe left his debut form well behind when the comfortable winner of a mile maiden at Kempton Park on 17th March and the Authorized colt takes a step up in class tomorrow when he will be partnered by Hollie Doyle.

Trainer Joseph Tuite reported: “Gentleman Joe is in great form and I have been very happy with him since his win at Kempton Park.

“Tomorrow is obviously a step up in class and will tell us where we are with him but he is a nice horse and I couldn’t be happier with him.

“He does have an entry in the Dante Stakes at York but as I say tomorrow’s race will tell us where we are with him.”

Tomorrow’s seven-race card at Newmarket also features the Pat Smullen Memorial Handicap, which has been organised by friends of the late nine-times Irish Champion Jockey who sadly passed away in September last year. Newmarket is the track was where Smullen recorded his first British Classic victory, partnering Refuse To Bend to victory in the 2000 Guineas in 2003. He went on to ride 1,845 winners in Ireland and 47 in Britain, winning both the Derby at Epsom Downs and the Irish Derby on Harzand in 2016.

The going at Newmarket is currently Good, Good to Firm in places. The forecast is for dry and sunny conditions throughout the week with temperatures of nine to 11 degrees Celsius. Five millimetres of irrigation was applied to the course on Thursday and a further three millimetres was put down on Saturday. Further irrigation will be undertaken today.