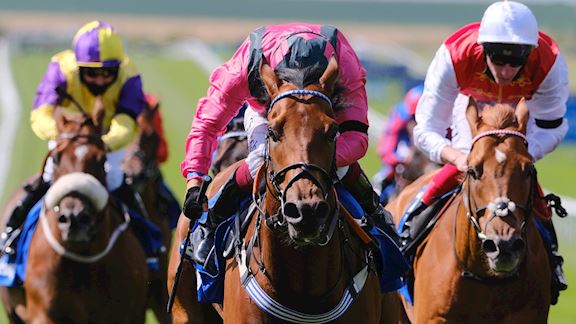 Roger Teal reports Darley July Cup hero Oxted remains on course to try and secure back-to-back victories in the bet365 Abernant Stakes at Newmarket later this month, but admits he will only run if the ground is suitable.

The Lambourn trainer has earmarked the six furlong Group Three prize on Thursday 15th April as the next port of call for the five year old, who was last seen finishing down the field on his dirt debut in a conditions contest at Riyadh in Saudi Arabia in February.

Although keen to give the gelded son of Mayson his first start in Britain this year in the Abernant, the Group One-winning handler could switch targets and take aim at the following month’s Group Two Duke Of York Stakes at York if conditions on the Rowley Mile are too quick.

Teal said: “At the moment the plan is to go to Newmarket as long as the ground is not rattling fast. Newmarket can get very quick so we will be guided by the weather.

“He is on track for Newmarket, but he is entered in the Duke Of York and if we feel the ground is too quick for him next week we will wait for that instead.

“He took the travelling to Saudi Arabia really well but he lost quite a bit of weight on the journey back. However, he put that back on quickly and he looks in great order - I could not be happier with the way he looks.”

Reflecting on Oxted’s defeat last time out, Teal believes his stable star paid the price for going too quick too soon.

He added: “I just think we got our tactics wrong in Saudi Arabia and we should have been a bit more patient. We chased the pace early and ran out of gas at the end. We should have let him find his way into the race instead of going the break-neck pace they do on the dirt.”