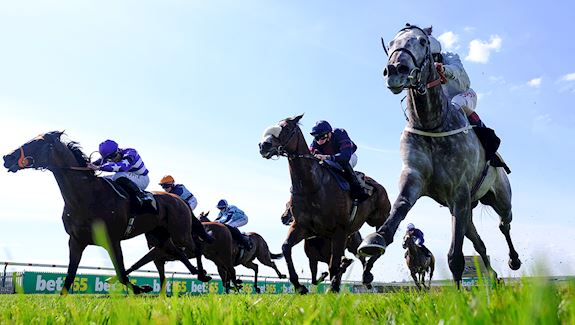 Few things confirm that Spring has sprung quite like the first day’s racing of the year at Newmarket. Day One of the bet365 Craven Meeting is seen by many as a declaration that Flat Racing is very much back.

And so it was on Tuesday 13th April when the 2021 season started bang on 1pm, with champion jockey Oisin Murphy resuming normal service to win the opening race. Racegoers are still waiting to be allowed back on track, so we sent Graham Clark to the Rowley Mile review the action and speak to the winners.

Highland Avenue made an instant impact on his turf debut to complete a hat-trick of wins for the year by leading home a one-two for trainer Charlie Appleby in the bet365 Feilden Stakes.

Arriving on the back of successive victories on the polytrack at Kempton Park, the son of Dubawi hit the target on his first start on grass when successfully taking both a step up in class and trip in his stride in the Listed feature race.

After being angled out for a run between the final quarter of a mile of the nine furlong prize the 9-2 chance picked up well in the hands of James Doyle to sweep past long-time leader New Treasure, before keeping stablemate Secret Protector at bay by a length and a quarter.

Appleby said of his winner: “He is doing everything the right way in a fashion that we are not trying to achieve too much too soon with him. He is very much a horse that might not jump straight into the deep end just yet.

“He is mentally improving with each run. Physically he is a big horse. Each run he is tightening up and skeletally is strengthening up well.”

Highland Avenue was shortened from a general 40-1 to 16-1 for the QIPCO 2000 Guineas back here at the Rowley Mile on May 1st but Appleby was quick to talk down an appearance in the first Classic of the year.

He added: “We are in no rush with him… At this moment I think a Guineas might be too much. I don’t want to lose this horse just by rolling the dice with him as he has got an engine.”

UNBEATEN MUTASAABEQ COULD BE A STAR FOR HILLS

Charlie Hills could have a potential Group race performer on his hands in Mutasaabeq, who maintained his unbeaten record with an impressive display in the bet365 British EBF Conditions Stakes.

After making a winning debut over seven furlongs on heavy ground in October, the son of Invincible Spirit appeared to appreciate the switch to a sounder surface in this latest course and distance success.

Prominently ridden throughout, the 7-2 chance gradually wound matters up from the sharp end before crossing the line six lengths clear of Noble Dynasty to give jockey Jim Crowley his first winner in Britain this year.

Hills said: “The way the track is and with the wind behind them it is a bit of an advantage being in front. He has won on heavy ground but he loved the ground today.

“We are always learning but I think he is a very talented horse. We didn’t put him in the 2000 Guineas and we spoke about it at length as we were a little bit concerned temperament-wise so we wanted to go down the soft route.

“We are mindful it is a long season and there are plenty of good races we can aim for. He was a bit funny in the stalls but we can work on that and he has got a bright future, for sure.”

NORTON “MASTERCLASS” GETS OVERWRITE BACK ON TRACK

Franny Norton was praised for giving a jockey’s “masterclass” to help Overwrite get his career back on track with a tenacious success in the Pat Smullen Memorial Handicap.

The Mark Johnston-trained four year old ended a spell in the doldrums when going one better than at Newcastle six days ago in the mile contest named in honour of the Classic-winning rider, who died following a lengthy battle with cancer in September.

Despite being joined up front late on by eventual runner-up Oh This Is Us, the 16-5 chance found more to prevail by a head and secure his first victory in more than nine months.

Charlie Johnston, son and assistant trainer, said: “That was top class from the jockey and it was a masterclass on how to ride this track. I think I knew from about 200 yards in that he was going to win.

“I was always confident Franny felt he had Scottish Summit covered - it was just the danger that Oh This Is Us came quite wide and late. I think if he would have come closer he would have kept finding more.

“It was a good performance. He is probably the type to try to get high enough up in the weights to sneak into the Royal Hunt Cup.”

The George Boughey-trained Cotai Glory colt made up for his late withdrawal on from the Brocklesbury Stakes at Doncaster on the opening day of the season with a smart performance in front of Joorabchian, who operates under Amo Racing Limited.

Racing just in behind the early pace under jockey Rossa Ryan, the 4-1 chance waited until the gaps appeared late on before powering clear in the closing stages of the five furlong dash to defeat early leader Love De Vega by three quarters of a length.

Joorabchian said: “He looked great today. He has got a lot of speed behind him and is bred really well. Hopefully he will be a good horse and lead us into more fun things to come.”

Winning trainer Boughey believes that Forca Brasil could be the type to take up an entry in the Group Two Norfolk Stakes, should he make it to the Royal meeting.

He added: “He wasn’t rapid from the gate but Rossa said after a furlong he was just in his hands and he travels very well. He is showing a lot of speed at home and Rossa has said at the moment five furlongs is his trip.

“He has worked a few times here and it has been good. He looks a Norfolk horse probably, but he has done it nicely today.”

Carolus Magnus benefited from a fine front-running ride from dual champion jockey Oisin Murphy as the pair won the Alex Scott Maiden Stakes to become the first Newmarket winners of 2021.

Having finished third on his debut at Doncaster 16 days ago, the Holy Roman Emperor gelding went two places better to open his account at the second time of asking in the seven furlong contest.

Although odds-on favourite Magical Land emerged out of the chasing pack late on he could not get on terms with the winner, who had a length and three quarters to spare at the line.

Andrew Balding’s colt, an 11-2 chance on the day, missed all of last season through injury and the trainer said afterwards: “He has done really well as he had a pretty serious injury as a two year old.

“They are patient understanding owners, Kennet Valley Thoroughbreds, and they always come up with good horses. It helped he knew what he was doing today but he is a fair horse.

“He could go a mile so we will look at our options and make a plan from there.”