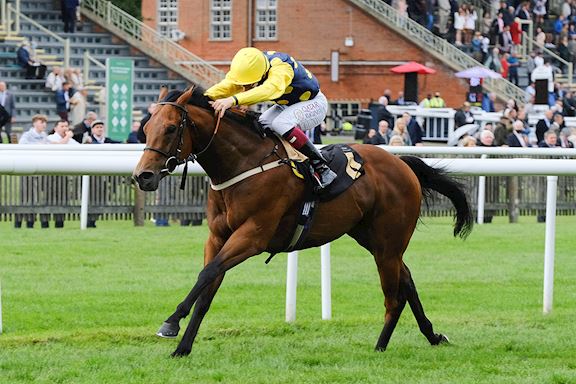 Five things we learned at Newmarket on Saturday 19th June

The weather might not yet have caught up but with racing returning to the July Course at Newmarket it can mean only one thing – summer has arrived!

Saturday’s raceday offered more pointers for the Flat season ahead than it did ready-made champions but there were plenty of clues and some horses we fully expect to see back in the winner’s enclosure at Newmarket in the weeks to come.

We sent Graham Clark along to talk to the winners …

Cieren Fallon hopes his victory aboard Isle Of Lismore in the feature contest is a sign of things to come at the track for defending Darley July Cup hero Oxted at next month’s Moet & Chandon July Festival.

Having secured what he described as the “highlight of his career” aboard Oxted in the King’s Stand Stakes at Royal Ascot on Tuesday, Fallon ended his week to remember on a winning note when steering Isle Of Lismore to glory in the MansionBet Summer Of Lovely Racing Handicap.

With two Group One victories already in the locker on Oxted, the dual champion apprentice is keeping his fingers crossed he can make it a hat-trick of top level wins aboard the Roger Teal-trained gelding back at Newmarket’s July Course on July 10th.

Fallon, who turned 23 this week, said of his Royal Ascot triumph this week: “It was incredible - the highlight of my whole career and a dream come true. He has come right again. He is a horse that comes right in the second half of the year and I was lucky enough to get back on him at the right time.

“He has come out of the race well and Roger and Harry can start training him for the July Cup and hopefully we can defend our victory in it from last year.

“The sprinting division is getting a lot tougher and better each year. You could run these sort of races 10 times and get a different result 10 times. I was lucky Oxted came out on top in the week.”

Victory for Isle Of Lismore, who led home a one, two, three for winning trainer Rob Cowell in the five furlong dash, ensured Fallon is back in the good books of the Six Mile Bottom handler.

He added: “Robert (Cowell) gave me a telling off after beating his other horse (Arecibo) with Oxted but I was glad that got a winner for him today. He has been a big supporter since I was a 7lb claimer so to win a feature race at Newmarket for him, I’m happy.”

HANNON AND DOBBS AT THE DOUBLE AS LUSAIL COASTS HOME

Lusail bolstered his chances of an outing in the Group Two bet365 Superlative Stakes at the track next month.

He prevailed by a length in the Betstival Season At MansionBet British EBF Novice Stakes to initiate doubles for trainer Richard Hannon and jockey Pat Dobbs.

Hannon, speaking away from the track, said: “He is a very nice horse and I was a little bit disappointed with his run at Pontefract. It was soft there but there was give in the ground at York.

“He has won very well and we are back in business and he looks like the horse we hoped he was. The seven (furlongs) suited him well and we might come back for the Superlative.”

BEAR CLAWS BACK THE LEADERS TO CLAIM FILLIES’ HANDICAP

A drop back to six furlongs appeared to have the desired effect on Mummy Bear, who secured the brace for Hannon and Dobbs.

She and Dobbs had been patient throughout but made their move late and got up to claim the MansionBet’s Betstival Beaten By A Head Fillies’ Handicap.

Hannon was delighted with his 16-1 winner, whose victory he followed from the last day at Royal Ascot.

Plenty more is likely to be heard over the coming months of the William Haggas-trained Baaeed who maintained his unbeaten record when running out a decisive seven and a half length winner of theMansionBet’s Betstival Bet 10 Get 20 British EBF Novice Stakes.

The nature of his victory impressed connections and pundits alike and anyone looking for clues for later in the season could do worse than to add the colt’s name to their notebook.

Angus Gold, racing manager to the Shadwell Estate Company Ltd, said: “He looks pretty good. We always thought he was nice but little injuries just held him up. He has got more speed than his brother (Hukum).

“He is not short of toe, though Dane O’Neil (jockey) said he didn’t quicken as well here as on fast ground at Leicester. We will not put him straight in the deep end and I would think we would go up to a mile and a quarter and look for a Group Three or Listed race.”

There were few smiles bigger at Royal Ascot than the one worn by Marco Ghiani after winning the Royal Hunt Cup aboard Real World and the young jockey was back in the winner’s enclosure twice here at Newmarket.

Final Watch secured a double for the apprentice when holding on by half a length in the Follow @mansionbet This Betstival Season Handicap.

Ghiani said: “It is going really well this week. I won the Royal Hunt Cup which was amazing and it was nice to be at Newmarket with five rides and getting two winners.”

He added of the William Stone-trained 3-1 chance: “He jumped and travelled really strongly. The last time I rode him I was a bit off the bridle but I think he has improved a bit as he looked stronger today.”

The Stuart Williams-trained Gellhorn (7-2) had earlier got the ball rolling for Ghiani when scoring by a short head in the MansionBet Proud To Support British Racing Handicap.