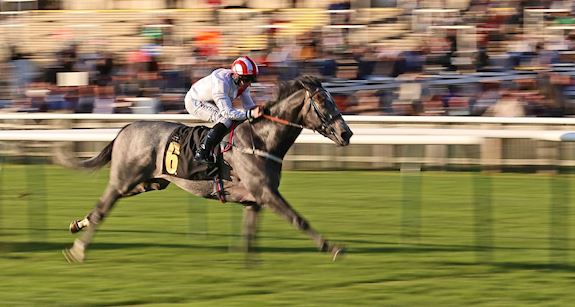 James Tate insists stable star Top Rank has come out of Royal Ascot “bouncing” and ready for a quick turnaround to contest the Close Brothers Criterion Stakes at Newmarket on Saturday (June 26th).

The son of Dark Angel features among 16 entries received for the Group Three feature, which this year returns to the July Course, having been staged on the Rowley Mile during 2020 due to the COVID-19 pandemic.

Since making a winning return at Listed level in the Doncaster Mile, Top Rank has tasted defeat twice in Group One company after finishing third in the Lockinge Stakes at Newbury and sixth in last Tuesday’s Queen Anne Stakes at the Royal meeting.

Although Tate has no issue dropping Top Rank down to seven furlongs for the first time in his career, he would only be willing to do so if conditions are in his favour.

He said: “Top Rank has come out of Ascot very well. Perhaps in hindsight that ground was just quick enough for him. He has come out of the race bouncing and I’m desperate for another go with him.

“He had the worst of the draw in stall one at Ascot. He challenged a couple of furlongs out then he just held back a bit on that fast ground and finished sixth. Had the ground been like it was in the Lockinge, he would have maybe instead been challenging for third.

“He is in a Listed race at Windsor over a mile. I would rather run in the Group Three but I will be dictated by the weather.

“Fast ground would put me off but I’ve just walked it and it is lovely ground, what I would call Good to Soft and there is a bit of rain forecast so we will just keep an eye on the weather.

“Dropping back to seven furlongs wouldn’t worry me as it is a stiff final furlong at the July Course and it would suit him better than the Rowley Mile.”

Oh This Is Us, who claimed a first victory at Group Three level last time out in the Cazoo Diomed Stakes at Epsom Downs is one of three entries for trainer Richard Hannon, alongside Mums Tipple and Motakhayyel.

Charlie Appleby is responsible for 2019 runner-up Glorious Journey and Royal Crusade while David O’Meara is another trainer double-handed after entering both Azano and the four-timer seeking Rhoscolyn.

Other notable entries include the Ralph Beckett-trained Kinross, who scored at the same level in the Betway John Of Gaunt Stakes at Haydock Park on his most recent start, and last year’s Norfolk Stakes winner The Lir Jet from the Michael Bell yard.

Meanwhile he John and Thady Gosden-trained 2019 St Leger winner Logician is the stand-out name among 17 entries in the Close Brothers Fred Archer Stakes.

Having saddled Universal Order to glory in the race 12 months ago, trainer David Simcock could be double-handed in his bid to claim back-to-back victories in the mile and a half Listed contest after entering both Desert Encounter and Oriental Mystique.

Roger Charlton, who landed the 2018 renewal with Second Step, is represented by Louganini, while Trueshan, winner of last year’s Group Two Long Distance Cup at Ascot, is a potentially interesting contender for trainer Alan King.

A total of 24 entries have been received for the Listed Maureen Brittain Memorial Empress Fillies’ Stakes, including Albany Stakes third Oscula, who is one of three entries for trainer George Boughey alongside Cachet and Hellomydarlin.