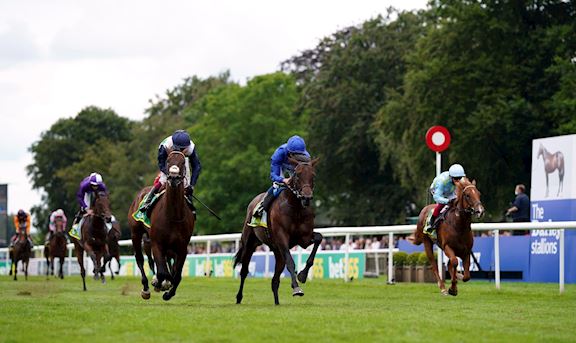 The Godolphin team enjoyed a 5.8-1 double in back-to-back contests on day three of the Moët & Chandon July Festival when Native Trail made it two wins from as many starts in the Group Two bet365 Superlative Stakes over seven furlongs.

Winning trainer Charlie Appleby is now pondering a Group One target for the colt, with the Vincent O’Brien National Stakes at the Curragh in September looking the most likely option.

A two year old son of 2003 Darley July Cup hero Oasis Dream, 11-4 chance Native Trail took a while to find his stride today but demonstrated his ability to change gears inside the final furlongs as he got up to take the contest by a short head form Masekela.

Afterwards Appleby said: “He was strong at the line and I think we saw that at Sandown really. He’s obviously a nice horse to ride through a race because he goes through his gears smoothly and we saw that on his first start and I feel we’ve seen that again today. I won’t go as far to say I was confident that we’d win but the way the race was developing I knew he’d be doing things the right way round and hit the line strong.

“He was a breeze-up horse so he will have a bit of experience put to him early doors. He’s a very laidback character though and this was a good achievement today, but I feel when he steps up in trip in time we will see a good bit of improvement again.”

Asked about future targets, Appleby added: “It’s a bit of a trodden path now for myself that I like to go to Ireland and have a go over there (in the National Stakes at the Curragh) and the ground will suit him.

“My only concern coming into today was the quick ground - we know that Oasis Dreams are better on a sounder surface but he’s a big unit and has some big feet on him so a little bit of ease in the ground won’t do him any harm.

“We’ll look towards the National Stakes and I think potentially onto something like the Racing Post Trophy or the Prix Jean-Luc Lagardère after that.

“One of the first things William said when he jumped off him is that he will be a lovely three year old next year.”

Winning jockey Buick added: “I was very impressed. He’s a very imposing horse and I loved him the first time I saw him.

“He’s a very raw horse but when he had something to race against he kept finding more. He’s the most gorgeous looking horse and very talented too.

“The guys at the yard would know a lot better than me but what I do know is that he’s very good with all his work and you can’t throw enough at him. He’s just a lovely horse.”

Asked by ITV Racing if the talented two year old could be a QIPCO 2000 Guineas contender next year, Buick added: “That would be very unfair on the horse to look that far ahead. He’ll keep building on this and take one step at a time. Charlie and His Royal Highness will decide on the plan.”

Andrew Balding, speaking from Ascot, said of runner-up Masekela: “That was good to see. I thought he would run a big race in the Chesham when we stepped him up to seven furlongs for the first time but he just couldn’t handle that deep ground. Today was much more like it and he looks an exciting horse.

“It was nice to see him come back to form like that and hit the line well. He will stay further in the future but I think we stick at seven for the time being. He is a big fine horse that I don’t want to over-race this year. We will just take a deep breath now and work out a plan.

“I’d say we probably won’t go to Goodwood at this stage but I need to sit down and discuss things with the owners.”