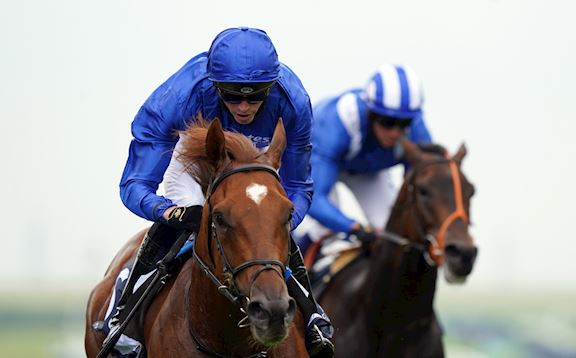 Yibir justified 6-4 favouritism in the Group Three Bahrain Trophy to secure a comfortable victory in the 1m 5f contest.

Racing in the famous blue silks of Godolphin, the Charlie Appleby-trained son of Dubawi took up the running entering the final furlong and never looked in any serious danger as he came home two and a half lengths clear of Mandoob under James Doyle.

A one-time Cazoo Derby contender until being pulled out five days before the Epsom Downs Classic, Yibir has been gelded since his last start.

Winning trainer Appleby praised Yibir’s work-rider and explained: “Shane Fetherstonhaugh I have to give a lot of credit to as he is the man that has tried to keep a lid on him every morning and he has done a great job.

“He was the first person I called to congratulate as it can sometimes be frustrating when you are sat on these good horses and they don’t deliver on an afternoon, but he has got the job done today and it is a great team effort to get him back on winning ways.

“We left him in The Derby until the five day stage but we felt he wasn’t going to come up to scratch in The Derby. He ran in the Cocked Hat and came a good second to a horse that ran well in the Irish Derby.

“He has opened himself up to plenty of options but we are very fortunate that the three year old middle distance camp is very strong. He is a horse that we will put back in the pack and then start to deal them out over the next three to four weeks of who is going where and doing what.”

Appleby also praised Yibir’s work ethic, adding: “You can say on his pedigree on his dam’s side that stepping up in trip was always going to help him but we tried that with Wild Illusion and she didn’t get a mile and a half - a mile and a quarter was her optimum trip.

“This horse, as we have learnt this spring, is a great traveller. We have always just felt he’s looked a bit more awkward in the last furlong of his races.

“He has been gelded since his last start. Would I say it has changed his homework? No because he has always been a good work horse. We were confident coming into today if we could ride him cold I felt he had the class that he could take himself there comfortably enough that we didn’t have to ask too much at the business end and that is what he showed today. It was a great ride by James (Doyle).”

Meanwhile Brian Meehan, trainer of 7-1 runner-up Mandoob, said: “I thought it was a great step up from novice company to a Group Three race.

“It was a really creditable run and I think he’s a really nice horse with a bright future. We could possibly go to the Lonsdale Cup at York next - he was entered in that this week, but he’s been a very easy horse to train because each target has been followed on from the next.

“I just love the way he’s operated today having come from novice company and he’s a horse with a bright future so we’re very pleased.”

Jockey Jim Crowley added: “He’s run very well and just got beaten by a better one on the day but it was a good performance. I’d like to think he’d come forward again for slightly further.”

FRANKELLA LIVES UP TO HER PEDIGREE AT THIRD TIME OF ASKING

Few horses in training can boast a pedigree as outstanding as Frankella, who was successful in the opening British Stallion Studs EBF Maiden Fillies’ Stakes over six furlongs. The two year old filly is by the outstanding Frankel and out of Arabian Queen, who landed the Group One Juddmonte International in 2015.

Home-bred by owner Jeff Smith and trained by Andrew Balding, Frankella had finished out of the money on her first two starts at Salisbury but there was a lot to like about her success today as she battled on gamely to score at odds of 20-1 by half a length from Princess Shabnam.

Winning jockey Oisin Murphy said: “She’s got a really good pedigree and it’s a great result for the family. She improved going back to six furlongs on better ground and hopefully she’ll build on this.

“She’s not very big but her dam wasn’t very big and she was very talented. I’d be very hopeful that this filly progresses – she’s certainly stepped up on her first two runs.”