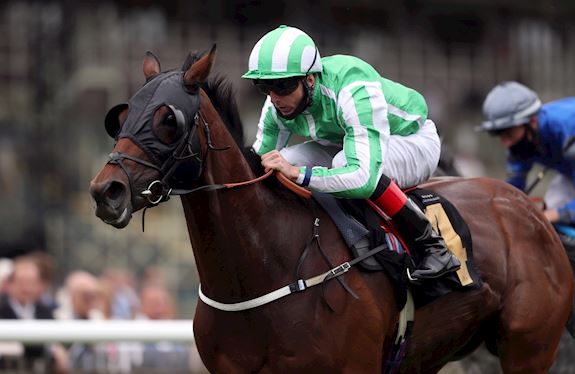 Alan King’s Duke Of Condicote landed the Price Promise at bet365 Handicap over a mile and a half to bring the curtain down on this year’s Moët & Chandon July Festival.

The No Nay Never gelding, an 11-1 chance, did not enjoy the clearest of runs in the final quarter mile but once seeing daylight ran on very well for a cosy length and a half success under Martin Harley.

Anthony Bromley, who owns the four year old along with James Magee and trainer Alan King, said: “He rather turned it in at Newbury (last time out on June 22nd). He cruised there and didn’t really go through with it.

“The blinkers have worked at home and he worked brilliantly in them last week. Martin said he was going to sit right out the back and come with a run and it has worked.

“Alan said if we are going to go with one time blinkers we are going to go for a good race and he found this one. I thought it was a bit optimistic but he has always threatened to be a good horse but some of his back form is very good.

“It ended up being a bit of sprint and we did want it to be a bit more truly run but he coped with it, which was nice.

“I thought it was a bit harsh we went up 3lbs for the last run but it probably wasn’t now. We will see what the trainer thinks and what he wants to do next.”