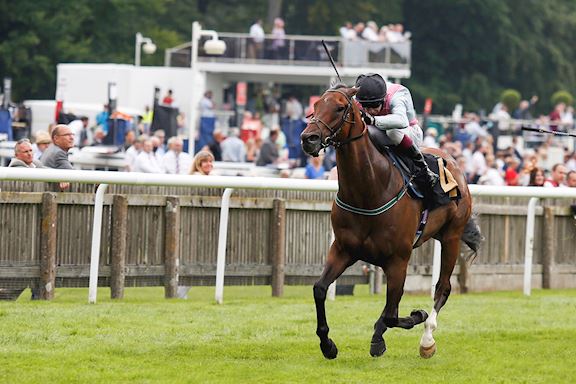 Reigning champion jockey Oisin Murphy recorded a 30.5-1 double on day two of the Moët & Chandon July Festival when partnering La Maquina (6-1) to victory in the Cash Out At bet365 Handicap over seven furlongs.

Murphy looked to have it all to do on the six year old son of Dutch Art entering the final furlong but a strong late run saw him get up to defeat 4-1 favourite Aquaman by a short-head, adding to his earlier success on Live Your Dream in the bet365 Trophy.

Winning trainer George Baker was quick to identify the newly-announced £550,000 International Turf Series, which reaches its conclusion in Bahrain in February of next year, as a possible option for his winner.

The series is for horses rated 85-100 and Scott said: “We could go to Bahrain now. He was bouncing off this quick ground so he could easily be one for over there, particularly this new 85-100 series.

“We are delighted with him and he’s a horse who’s had a few little issues. He’s got a silly quarter crack on his hoof – which is like a split finger nail for us – it’s nothing but it’s really sore and it’s just really annoying. We have to manage that and it can take a little bit of time to bounce him back but he’s just a fresh horse in good order.

“We’ve got a specialist farrier who looks after him all the time and we’ll probably go to Goodwood next and then possibly Bahrain. We’ve put a few of our eggs into the basket over there and I’m excited by it.”

Another jockey to enjoy a day two double was David Probert, who partnered 5-2 favourite Twilight Calls to victory in the concluding Moët & Chandon Handicap. It was a 10.2-1 double for Probert following his triumph aboard Sandri in the Group Two Duchess of Cambridge Stakes earlier in the afternoon.

A three year old Twilight Son colt owned by Cheveley Park Stud, he was delivered with a strong run inside the final furlong to deny King Of Stars (16-1) by a neck in a time of 57.33 seconds, just 0.02 seconds outside of the record time of 57.31s set by Mountain Peak in 2019.

Henry Candy, the successful trainer said: “It was me under pressure that decided to drop him back to five. I didn’t want to be limited at five furlongs but we kept trying him over six and it soon became obvious this was his ideal trip as he has got a huge amount of speed. He still just idles a little bit in front but David (Probert) said he didn’t have to get too serious.

“We will stick in handicaps at the moment but hopefully with a little bit of time on his back he might graduate to something else. He has got a lot of speed. He is a lovely horse that is very quick and is a spitting image of his dad.”