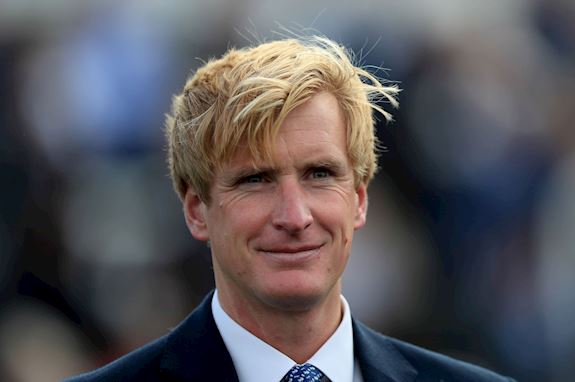 Ed Walker believes his hugely exciting Starman has the ability to become “the sprinter of his generation” as he bids to pick up a first Group One success in Saturday’s Darley July Cup at Newmarket.

There was 23 confirmations today for the Darley July Cup, which takes place over six furlongs on the July Course and forms part of the British Champions Series.

Walker’s four year old has won four of his five career starts to date, with the only blot on his copybook coming in soft conditions in last year’s QIPCO British Champions Sprint Stakes at Ascot in October. He also impressed when making a winning return in the Group Two Duke of York Stakes at York in May – a run which Walker felt his colt would need in the run-up.

With Oisin Murphy riding Dragon Symbol on Saturday, Walker confirmed that Tom Marquand would take the ride on Starman and having scratched him from last month’s Diamond Jubilee Stakes at Royal Ascot on account of the going, he is confident of a big run.

Walker, who is based in Upper Lambourn, said: “Starman is in great nick. He looks a picture and we’re really excited. We were gutted to miss the Diamond Jubilee Stakes and I’m sad not to see Dream of Dreams running.

“I do mean that sincerely as this feels like a real championship race and a clash between all of the best sprinters around, so it’s a shame to miss out on a Diamond Jubilee winner taking on a King’s Stand winner. It makes it a bit easier for us, but Starman is in fine form and everything has gone smoothly, so hopefully the rain stays away and it’s good summer ground.

“It was a very easy decision (to swerve Ascot) but a brutal one to make. He’s only been beaten once and it was on that track in those conditions. All of the horses that beat him on Champions Day were at the fore of that race again so I think he would have been disappointing.”

Starman was an impressive winner on his return at York, defeating last year’s Darley July Cup winner Oxted by three and a half lengths. And although Walker is not taking Roger Teal’s charge lightly, he is confident that Starman can confirm the form.

He said: “I was very much treating the Duke of York Stakes as a prep race so it was impressive when he won like that and when I got to the winner’s enclosure he honestly wasn’t blowing, but he certainly looked like he was going to tighten up and improve for the run. I’m not going to say that he’s going to be stones better than he was at York but you’d like to think that he’d be better for that.

“Oxted has taken a bit of time to warm up this year and the Teals have been disappointed and now they’re understandably full of enthusiasm again and rightly so. He’s a very good horse, he’s a two-time Group One winner (Oxted also won the King’s Stand Stakes at Royal Ascot this year) and just because we’ve beaten him doesn’t mean he’s not a threat.

“He was a heck of a lot better at Ascot than he was at York and you can make a case for why we had a better trip than he did up there if you’re an Oxted fan. You can certainly argue why he might turn the tables but watching the race I never felt that Starman was getting beaten at York and that’s what’s so exciting.

“He’s got the opportunity to become the sprinter of his generation as he’s only got the one blip and I’d like to think that he could become the next Muhaarar, so I suppose we’ll find out on Saturday. He’s done absolutely nothing wrong bar that one run on bad ground and I just don’t know how much is up his sleeve. Only he can answer that question and hopefully he does that this weekend.”

Walker’s team for, the Moet & Chandon July Festival also includes Primo Bacio, who looks to have a leading chance in Friday’s Group One Tattersalls Falmouth Stakes, which takes place over a mile for fillies and mares.

Like Starman, she was also scratched from the Royal meeting on account of the ground but was a particularly impressive winner of a Listed race when last seen at York’s Dante Meeting in May.

And Walker feels there’s plenty more to come from her yet. He said: “Primo Bacio is flying and funnily enough I feel more confident she’s going to produce her best than I did going into Ascot on the round mile.

“It was a really difficult decision with her because we didn’t know that she would not have liked that ground as she’s by Awtaad who loved the mud. Lots of people were questioning my decision on that basis but knowing the filly I just didn’t feel it was right. She is a good moving filly with a really smart turn of foot and I think running her on a stiff mile in real bottomless ground and putting a massive emphasis on stamina just wasn’t right.

“Andrea Atzeni got on seriously well with her at York and he rides her again, so that’s good news. I’ve known Andrea for a long time and use him a lot when available and he’s a brilliant rider. He’s got that cool and it suits a filly like that really well. He did everything right and nothing wrong at York so it makes sense to keep that intact.

“I’m massively excited about this step up in class and more so after Ascot after the form was franked so much. The second at York (Creative Flair) has gone on to win a Listed race and the third (Snow Lantern) has gone on to finish second in a Group One so I can’t wait to see where this filly will end up.”